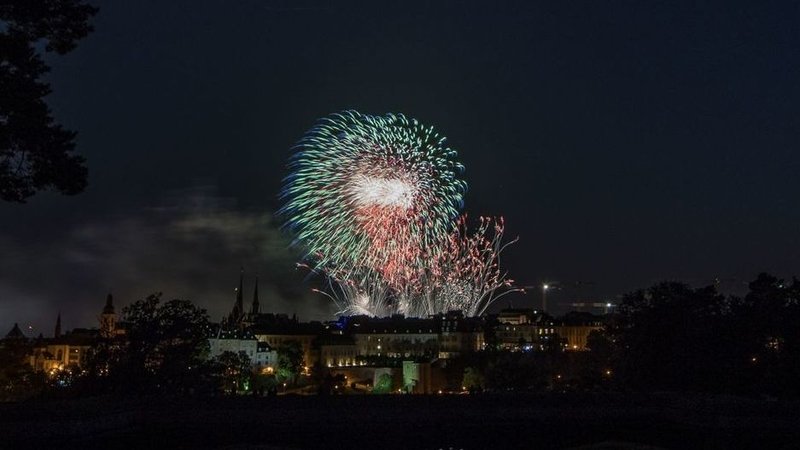 The celebration will be aired in its entirety on RTL, radio, online and on TV.

For the country's annual celebrations, an extensive program is planned throughout the weekend of the 22 and 23 June. This will start with the Grand Ducal's early evening visit to Bourscheid castle. The building holds historical significance: the castle’s foundation dates back 1000 years.

This visit will be followed by celebratory ceremony that sees emergency and rescue services rewarded for their duties in the main square. This is followed by the presentation of renovation plans by Mayor Annie Nickels-Theis at the Stolzenberg-Haus.

The whole Bourscheid visit is to last until 7.15pm on Saturday evening.

Running concurrently to this, HRH Prince Guillaume and Princess Stéphanie will carry out a traditional visit to Esch early on Saturday afternoon. The highlight here is the procession of 40 Esch societies on the Place de l’Hôtel de Ville. The day's program will end with a fair in front of the Esch town hall.

Members of the grand ducal family will return to Luxembourg City for a torchlight procession with around 2000 people and 7 floats that begins at around 9.30pm. The distinguished visitors’ gallery has been erected on Boulevard Roosevelt.

Fireworks wrap up the festivities at around 11pm and last roughly 15 minutes. They are set off on Pont Adolphe with a military music accompaniment. The best vantage points to see the display are the Boulevard d’Avranches, and the areas around the Gëlle Fra/Golden Lady, Hollerich and the Station.

National Day itself will start with another official, honorary ceremony where the Grand Duke will reward citizens for their commitment and service to the country.

Individuals from the spheres of culture, business and economy, sport, the military and of course, those who have demonstrated particular displays of civil courage, are to be recognised.

The ceremony will be aired in its entirety on RTL radio, online and on TV.

The philharmonic orchestra will be performing Ernie Hammes’ “Regiis ostium” for the occasion. A special committee elected the classical and jazz trumpeter out of 18 candidates in order to compose the piece.

Aside from the awards' ceremony, Grand Duke Henri, the Chamber of Deputy’s president Fernand Etgen and Prime Minister Xavier Bettel will all be giving speeches.

After the ceremony, 21 cannon shots will be fired from Fetschenhaff.

The military parade will commence at midday, however the procession will start not, as is custom, from the central station, but from Rue John. F. Kennedy in Kirchberg. Another highlight here is the “Fly over” of 3 military jets, accompanied by musician Stephanie Schlink. The parade this year includes roughly 200 soldiers, 140 police officers, 60 vehicles and 180 Grand Ducal Fire and Rescue Corps employees, so 840 people in total.

After the parade, the third edition of the military fair will take place, having moved from the Place des Martyrs to the Place de L’Europe behind the Philharmonic Orchestra. Aside from displaying new military and police equipment, there will be free beer and food.

The cathedral’s Te Deum service concludes the day’s festivities, starting at 4.30pm. the grand ducal family will be present.

Both the military parade and the Te Deum service will be aired on RTL Télé Lëtzebuerg and RTL Today.

4.00pm: Traditional changing of the guard in the forecourt of the Grand Ducal Palace

5.00pm: Eve of the National Day in Esch-sur-Alzette in the presence of the Heir Couple

5.30pm: Eve of the National Day at the Château de Bourscheid in the presence of the Grand-Ducal Couple

10.00am: Official Ceremony at the Philharmonie Luxembourg

4.30pm: Te Deum in the Cathedral of Our Lady of Luxembourg