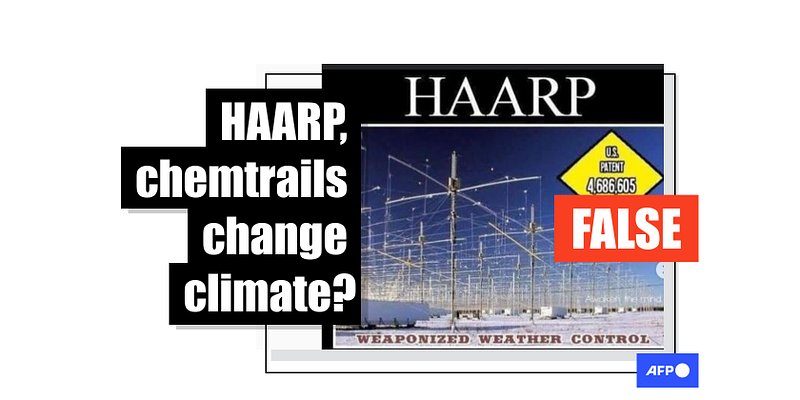 Scientists agree that carbon emissions are to blame for global warming, but social media posts claim humans are engineering severe storms and heatwaves. This is false; experts say existing weather modification technology cannot be used to deliberately manipulate the climate.

"The climate around is you being altered, affected, manipulated and changed to drive certain agendas," says a November 17, 2022 post on Instagram.

The post repeats the common conspiracy theory that weather is being modified by technology such as the High-frequency Active Auroral Research Program (HAARP) research station in Alaska and airplanes spraying chemicals into the atmosphere.

"#CloudSeeding #WeatherModification and #Chemtrails are real... The climate is changing BECAUSE of the operations being pushed by the government. It's all about #Depopulation and trying to get people to accept the #GreenNewDeal," the Instagram post says, referring to a progressive climate proposal in the US.

"Heat waves, droughts, tornados, storms, floods, whatever they want to do, they can do it with the technology they currently possess. It's all #GeoEngineering." 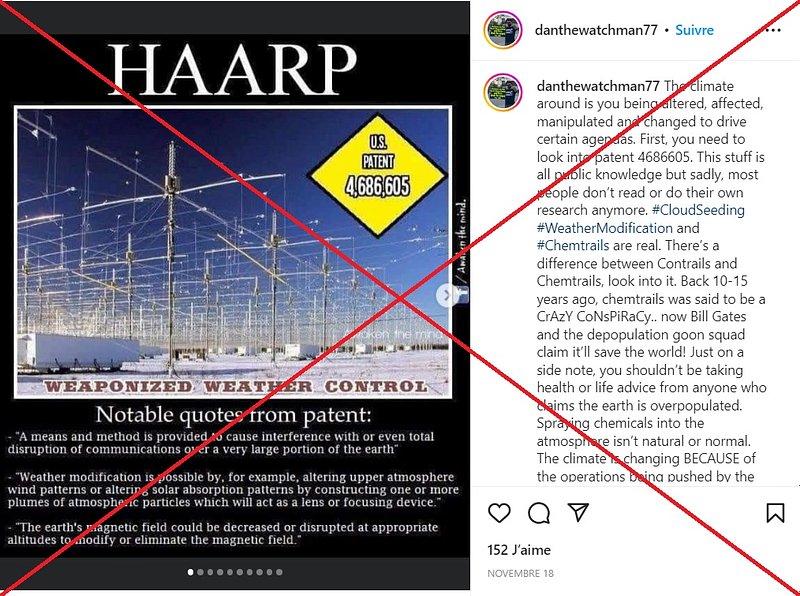 Similar claims are common on Twitter, Facebook and TikTok. AFP has previously fact-checked posts about HAARP and chemtrails in Finnish, French and Serbian. 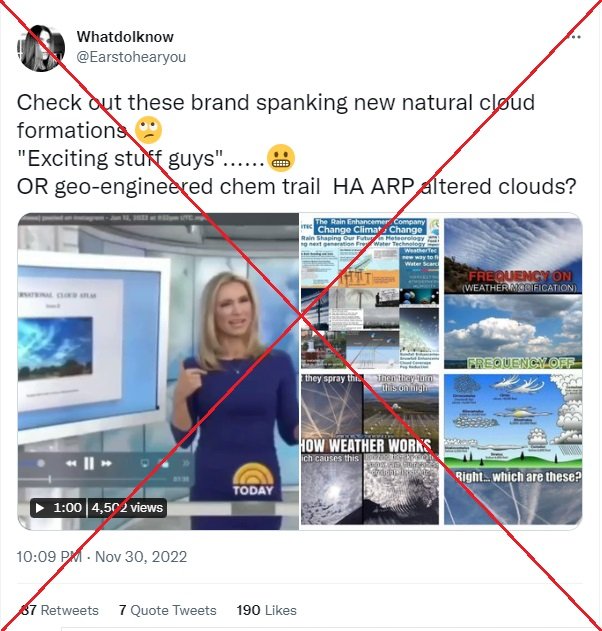 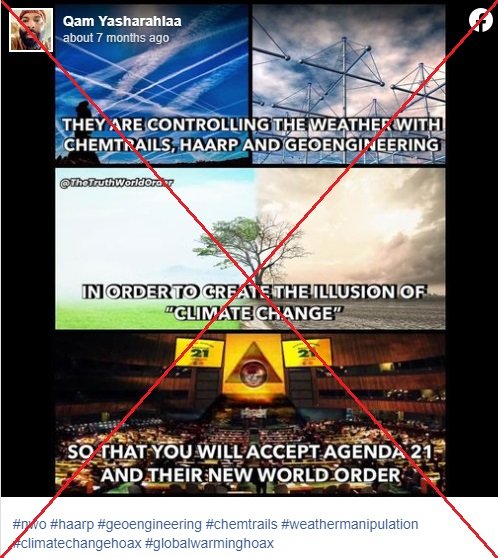 But experts consulted by AFP say the assertions are unfounded.

"Heatwaves, droughts, storms and floods are all caused by a variety of different conditions in the atmosphere and are often the result of the random combination of weather events," said Ella Gilbert, a meteorologist at the British Antarctic Survey, in a November 30 email. "It is technically extremely difficult to influence such a large, complex and chaotic system as the weather."

She added: "The idea that technology can somehow bring about these extreme events makes no sense."

HAARP not capable of weather control

The Instagram post includes a series of images of antennae at HAARP. The site was first run by the US Air Force and Navy before being handed over in 2015 to the University of Alaska-Fairbanks.

According to the university's website, the project's aim was "to research the physical and electrical properties of the Earth's ionosphere, which can affect our military and civilian communication and navigation systems."

HAARP's transmitters send radio waves into the upper atmosphere so that scientists can measure their effects. The waves are sent into the ionosphere -- the highest layer of the atmosphere, stretching from 80 to more than 500 kilometers above the Earth's surface.

This is far too high for such signals to affect weather or climate, which are determined by the troposphere. 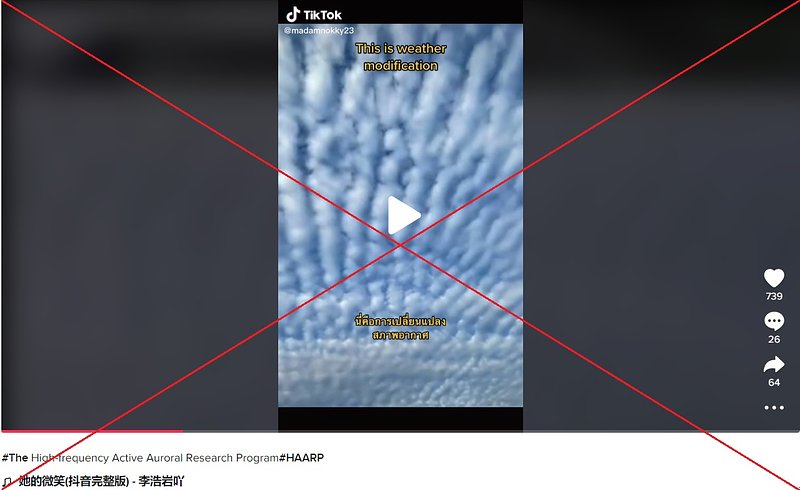 "The climate is essentially phenomena that occur in the troposphere, that is below about 10 kilometers' altitude," Philippe Marbaix, a researcher at the Earth and Life Institute at the Catholic University of Louvain in Belgium, told AFP in August 2022. "Above it is the stratosphere, which plays a role in the climate, but a secondary one."

The ionosphere lies far above these two layers.

The wavelengths of HAARP's transmissions -- measuring between 10 and 100 meters -- only affect the ionosphere, where particles are dense enough to reflect them, said Gilles Wautelet, a researcher at the University of Liege in Belgium. The signals have a negligible effect on the lower atmosphere.

"Physically, there is a light absorption of these waves by the neutral (lower) atmosphere, but it is extremely weak and it absolutely cannot explain a change in the climate or even the weather," he said in August 2022. "It is absurd to say that we can substantially modify the Earth's neutral atmosphere with the wavelength used by HAARP."

The Instagram post also cites a patent for a proposed device to heat parts of the ionosphere for defense purposes, claiming it is "proof that the US government is experimenting with the weather."

Filed in 1985 at the height of the Cold War, the document claims that in addition to disrupting enemy communications, the technology could be used for "missile or aircraft destruction, deflection, or confusion" or "weather modification."

The record on Google Patents indicates the device was invented by Bernard J. Eastlund, an American physicist recognized for an invention relating to nuclear fusion. The patent was granted in 1987 and later acquired by British defense firm BAE Systems.

The company declined to comment on the patent but pointed out that it is expired. A spokesperson referred AFP to the US Department of Defense, but a response was not forthcoming. 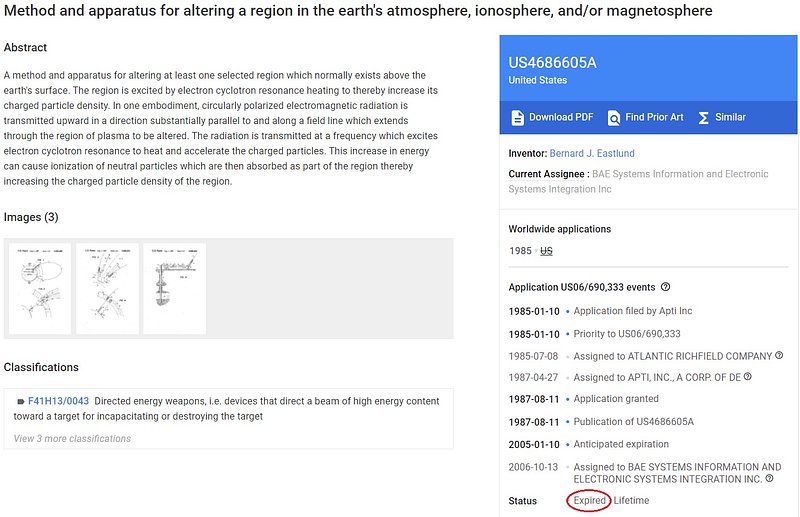 This screenshot taken December 2, 2022 shows a record from Google Patents

There is no evidence the technology in the patent was developed.

David Keith, a physics professor at Harvard University who leads a research group on solar geoengineering, told AFP it is not possible to modify the weather using the device described in the patent.

"HAARP and the concepts in US patent 4686605 are not used for altering the weather, and they would be effectively useless for that purpose," he said in a December 1 email.

Other images in the Instagram post show structures including a US weather monitoring network and a floating missile-tracking system. Scientists say these are not capable of changing the weather, either.

"Weather is inherently chaotic. To control the weather would require unprecedented levels of understanding, predictive ability and technological advancement that we just don't possess," said Gilbert of the British Antarctic Survey.

No evidence for chemtrails

The Instagram post includes several pictures of airplane clouds, repeating a common conspiracy theory that "chemtrails" are sprayed into the atmosphere to affect the weather.

Airplanes produce condensation trails or "contrails" because "the heat of aircraft engines causes water vapor in the atmosphere to condense into water and then freeze into ice crystals, which coalesce into long, thin clouds that follow the path of aircraft," Gilbert said.

"Their engines also release tiny particles of soot and other pollutants that may act as seeds for cloud formation," she added.

The post insists "there's a difference between Contrails and Chemtrails."

"Chemtrails have heavy metals like aluminum and barium in it with a mixed with a bunch of other garbage arisols (sic) That gets caught up in the clouds, the 5G towers turn on and can manipulate the heavy metals to react," it says.

But Harvard's Keith said it is not possible for 5G towers to change the weather.

"It's possible to spray aluminum or barium but there's no reason I'm aware of why it would make sense. It's not been seriously proposed as a way to modify the climate," he said in an email on November 29.

A study published in 2016 surveyed 77 atmospheric chemists and geochemists on whether they had observed evidence of a "secret large-scale atmospheric program" such as that alleged by "chemtrails" theorists. All but one of them said they had not.

The Instagram post contains several pictures of clouds, claiming that undulating formations are caused by interference from installations such as HAARP.

However, Gilbert of the British Antarctic Survey said waves in clouds "are extremely common."

"They typically occur when there is some kind of instability or up-and-down motion in the atmosphere, which produces an undulating cloud layer," she said. "These clouds form because the air is turbulent and moving up and down as it travels with the wind."

Gilbert added: "The idea of creating these clouds via some kind of technology is nonsense." 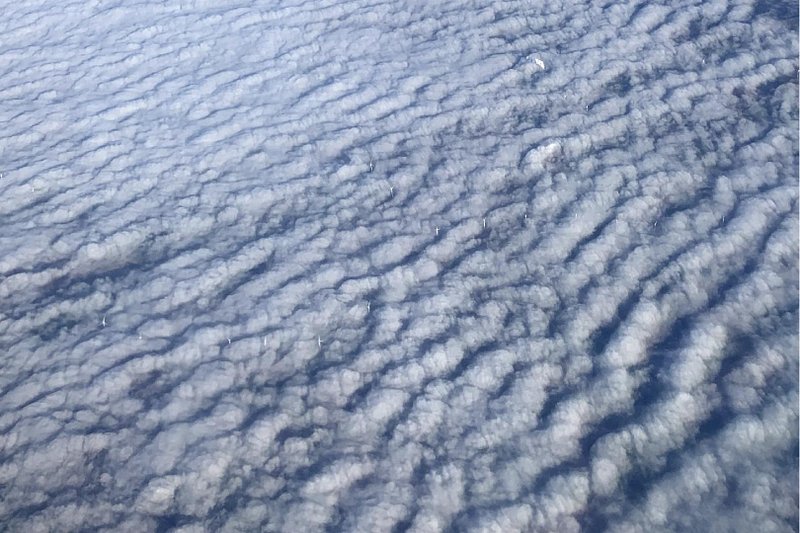 Clouds photographed from a plane over Germany on December 7, 2021 ( AFP / Olivier MORIN)

Cloud seeding with substances such as silver iodide is a well-documented practice to try to increase rainfall, but studies indicate its effectiveness has so far been limited.

Scientists agree that carbon emissions from humans burning fossil fuels are causing climate change, heating the planet and raising the risk of disasters such as heatwaves, floods and droughts.

The Intergovernmental Panel on Climate Change said in its 2021 report: "It is unequivocal that human influence has warmed the atmosphere, ocean and land."

AFP has fact-checked other false and misleading claims about climate change here.