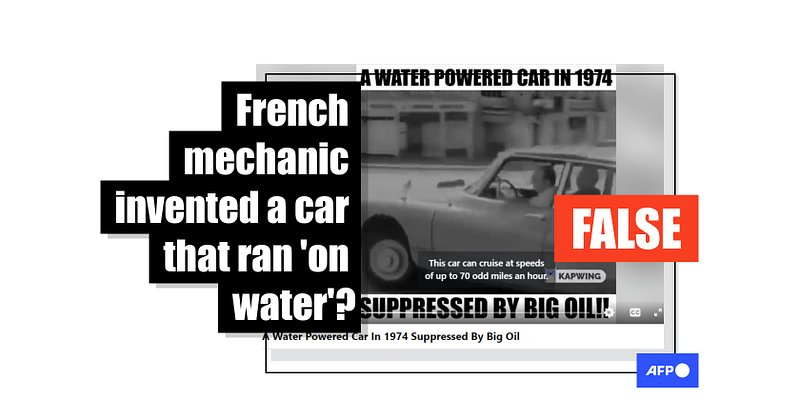 Thousands of social media users have shared a 1974 video of a car in France supposedly running on water, claiming this is a non-polluting hydrogen-based solution that was stopped by the petroleum industry. However, documents show the car in the video ran on a mixture of water and alcohol and engineers say it is not possible for a motor to be powered by water. Vehicles running on hydrogen do exist, but producing it as fuel generates substantial greenhouse gas emissions.

"A water-powered car in 1974 suppressed by Big Oil!" read captions placed over the black-and-white archive video, which shows an old Citroen driving past Rouen Cathedral in Normandy, northern France, and men pouring liquids into its fuel tank.

"This car can cruise at speeds of up to 70-odd miles (113 km) an hour -- on water," says the voice-over in English. "The energy factor of course is hydrogen, which as any schoolboy knows is contained in water in the ratio of two parts to one of oxygen -- a formula described by (French novelist) Jules Verne more than 100 years ago. So what have we been waiting for?" 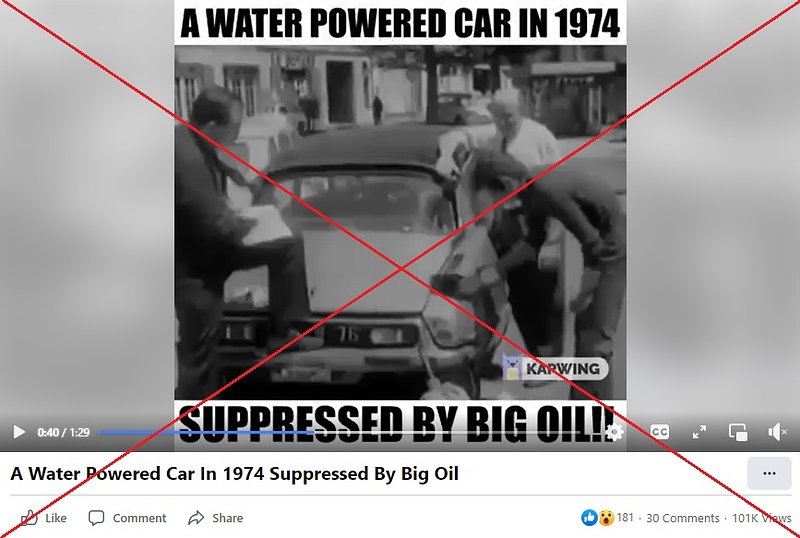 Along with filmed images of French mechanics presenting their invention in a garage, it goes on: "The engine can also power a generator, provide light and heat. What's more, it's pollution-free. The car's already run for well over a thousand miles and the promoters say the scheme is practical and a commercial proposition -- fuel on tap, in fact."

The video has been shared more than 101,000 times on Facebook (here and here) and has also appeared on Twitter, YouTube and Bitchute. It has been shared thousands of times in French in posts that present the invention as a "hydrogen motor".

However, the video wrongly describes the technology involved. Several experts consulted by AFP explained that water by itself cannot provide the energy needed to power a car's motor.

A Google search reveals the original video in the archive of the US news agency Associated Press. In that archive, the story is titled, "At Rouen, a car which runs on a mixture of water and alcohol." It contains a shotlist that indicates that alcohol is shown in the video being put into the car's tank as well as water. 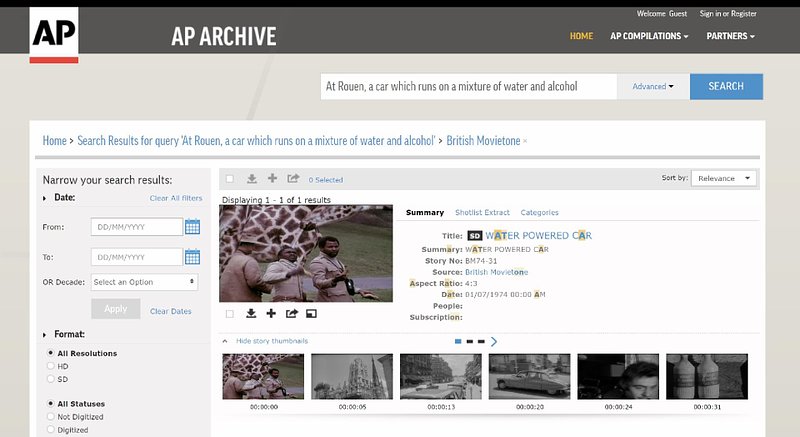 The car was also filmed in 1974 by the cinema news broadcaster Gaumont in a report that identifies the inventor: Rouen mechanic Jean Chambrin. The documentary group Gaumont Pathé Archives sent AFP documents that shed light on the invention, including a sheet dated October 1974 describing the report on the so-called "Chambrin water motor".

"In a demonstration for visitors, Mr Chambrin uses a mixture of water and alcohol in the following manner. To start the motor and raise the temperature, it runs for three to four minutes on pure alcohol. Once the desired temperature and speed have been reached, Mr Chambrin cuts the alcohol and switches to his mixture," the description reads. 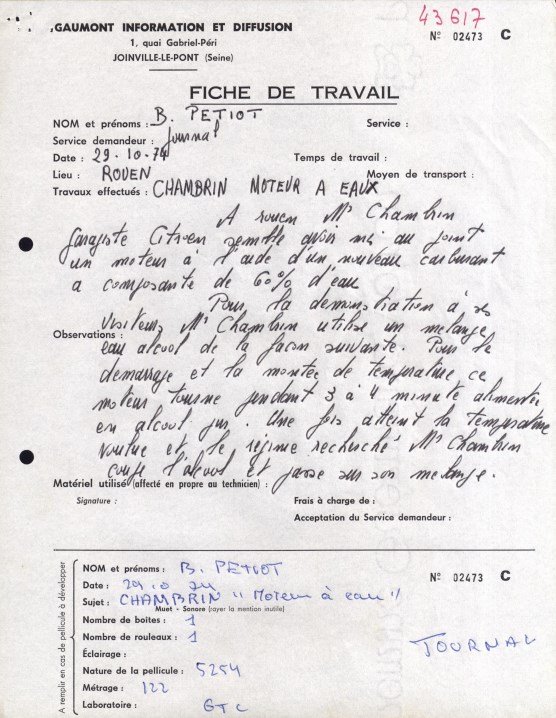 An article published online by the Lyon newspaper Le Progrès in August 2021 pictures Chambrin and his associate Jack Jojon in the workshop where it says they made the invention.

The idea that the Chambrin invention is a "water motor" or a "semi-hydrogen motor" is a "myth", Louis-Pierre Geffray, a transport expert at France's Institute of Sustainable Development and International Relations (IDDRI), told AFP on November 16, 2022. "It is nothing more than a petrol motor in which alcohol is combusted, and it works," he said. "It is simply the equivalent of a petrol car that runs on E85 (an ethanol blend), such as we have in France." 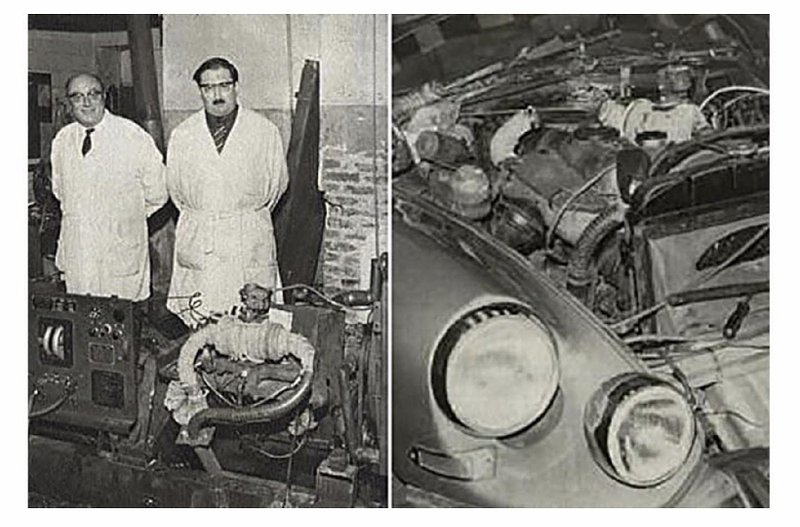 "A water-powered motor is not physically possible," Geffray added. "Water is not an alcohol, it is not flammable, so there is no energy to be obtained from it in liquid form."

Gaëtan Monnier, a transport specialist from the French energy and transport research institute IFPEN, told AFP in an email on November 17, 2022: "There is no such thing as a motor using water as fuel -- there is no energy stored in water, which is a molecule that is oxidised and stable."

Television channel France 3 Normandie filmed a report on the Chambrin motor in August 1977. "Here is the famous 'water motor'... in a manner of speaking, since for the time being it runs on half-water, half-alcohol," the reporter says at the start of the report to Jean Chambrin.

"Some people don't believe in it, but those people haven't come to see it," the mechanic replies. "We have been visited by physicists who believe it."

The story "was quite an event at the time -- an invention by a man from Normandy! Since the price of fuel was high in the 1970s, the stated aim of the Chambrin system was to consume less petrol when driving," the journalist who authored that reportage, Richard L'Hôte, told AFP on November 18, 2022. 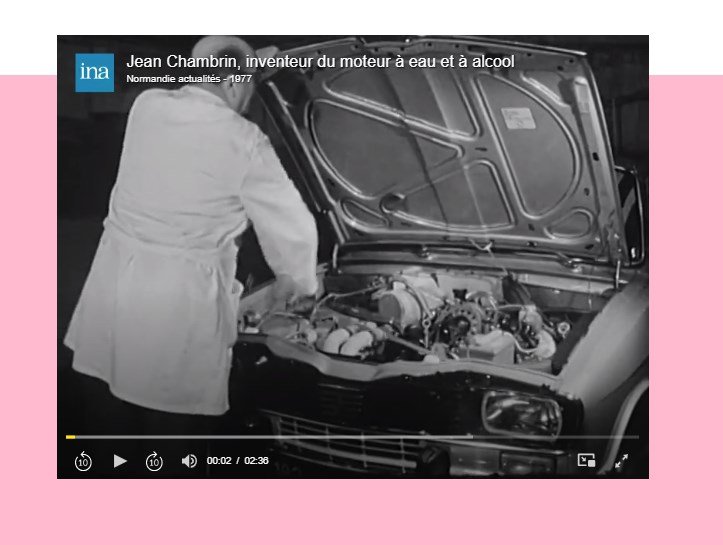 Announced during an energy crisis in the early 1970s that sparked high petrol prices and shortages, Chambrin's invention led to theories that oil companies and governments had covered it up.

The article in Le Progrès said the French authorities at the time carried out a technical and economic evaluation that did not lead to the idea being adopted.

In his patent application, Chambrin claimed to have developed a "device and means of conditioning a mixture of water and fuel, and even pure water, causing a thermochemical reaction resulting in the production of hydrogen in a plasma state for use in a thermal motor or in a heating system." 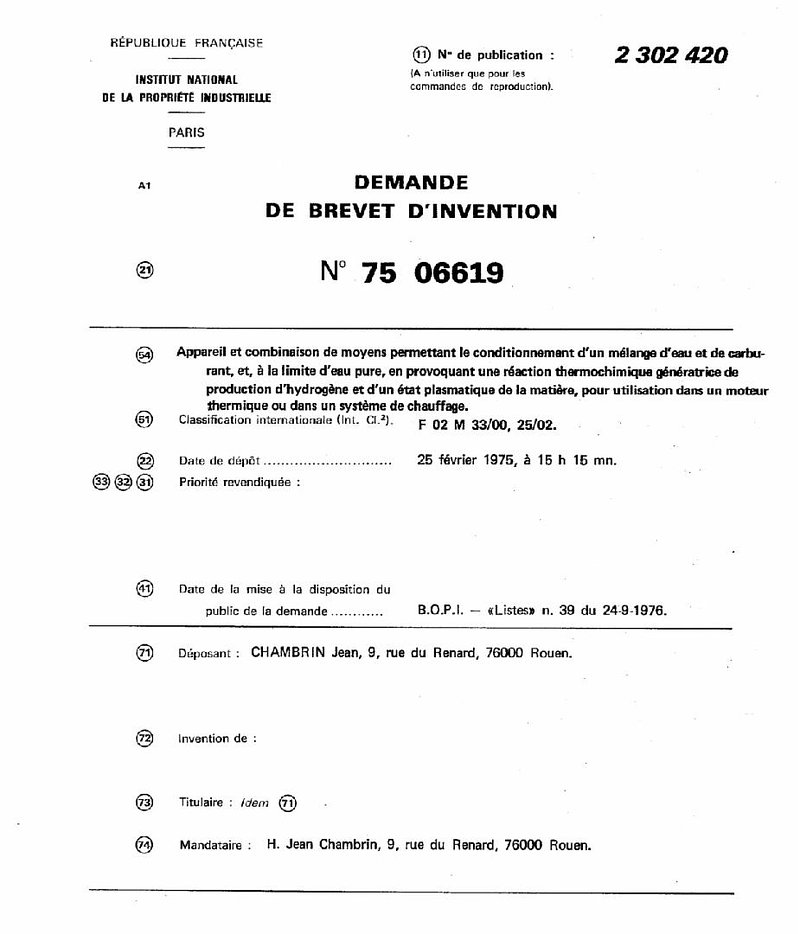 Bertrand-Olivier Ducreux, a transportation engineer at the French public environmental policy agency ADEME, said systems that use fuel mixed with water are also known as "water doping" or "Pantone motors".

"You see them come back into the limelight whenever there is an economic crisis, particularly when the price of fuel at the pump goes up, along with unclear claims about them being disruptive technology, hushed up by the petrol lobby," he told AFP on November 17, 2022.

He said ADEME funded several studies on the practical applications of such systems. Researchers "measured the fuel consumption and power of the modified motors: in each case, the results for consumption, emissions and yield were found not to show any significant change" compared to motors that did not use the water systems, he said.

"It is perfectly possible to run a petrol motor by putting into it a mixture of water vapour and petrol vapour, but that presents no advantage in terms of yield or consumption," said Ducreux. He added that claims in Chambrin's patent were not "credible" in terms of physics.

"It is possible to break up a molecule of water by applying heat to separate the hydrogen and oxygen that it is made up of. But this procedure requires very high temperatures over 2,700 degrees Celsius. These are not the temperatures mentioned in the patent filing," he said.

Even if the two elements were separated, he added, the patent does not state how they could be transferred in this unstable state to the motor.

"You can patent anything. A patent isn't a proof that a system is valid," he said. "A patent means that the idea belongs to the person who filed it, but it never endorses the claims that are made in it."

Technology does exist today that allows water to be injected into some petrol engines, said Louis-Pierre Geffray. For example, BMW developed a system for injecting a small amount of water into petrol motors.

"Although it works very well technically and yields reductions of a few percent in terms of fuel consumption and nitrogen oxide emissions, this device has never got to the stage of being used in mass-produced vehicles. This is doubtless due to the costs compared to other technologies with better potential value: hybrid vehicles, electric cars, etc.," he added.

"It is clear that adding water mixed with diesel fuel or petrol, beyond the few millilitres used by BMW, causes the motor to dysfunction in numerous ways," Geffray said. He said this has been seen in service stations where condensation has occurred in the fuel tanks.

Hydrogen is being explored as a possible source of low-carbon energy to help people switch away from the fossil fuels that are driving climate change. However, Chambrin's invention was not a hydrogen motor and cannot be compared to today's hydrogen fuel projects, said Ducreux.

Some carmakers have announced that they have started manufacturing vehicles running on hydrogen, such as Stellantis. Experts say that producing hydrogen causes heavy emissions of greenhouse gases, limiting its usefulness as a mass means of energy for the low-carbon transition.

"Ninety-five percent of hydrogen is currently produced from natural fossil gas, which emits carbon dioxide," said Geffray. "The first challenge is to decarbonise hydrogen production, before it can be used as an energy vector for new purposes such as transport."