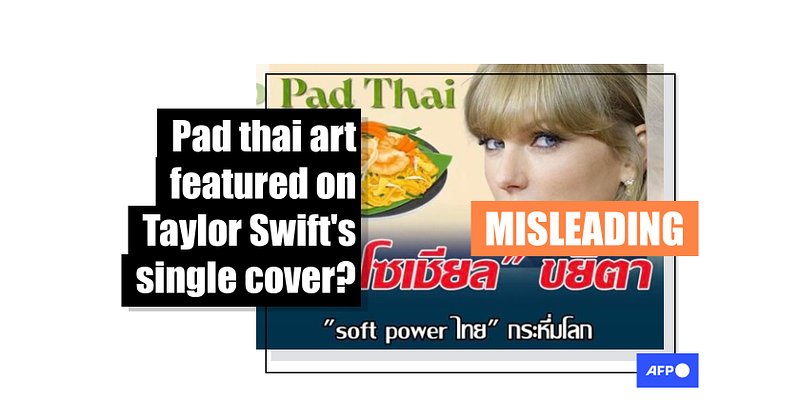 A stock image of a pad thai meal has been shared thousands of times in social media posts and online articles in Thailand that misleadingly claim it shows cover art for US pop megastar Taylor Swift's new single "Lover". In reality, the image was taken from an auto-generated video on the artist's YouTube channel and does not show genuine cover art for the song.

The post -- which has been shared more than 2,300 times -- also incorrectly suggests Swift released "Lover" this year, when in fact it was released in August 2019.

Pad thai is a popular Thai dish made with stir-fried rice noodles, eggs, tofu, and meat. 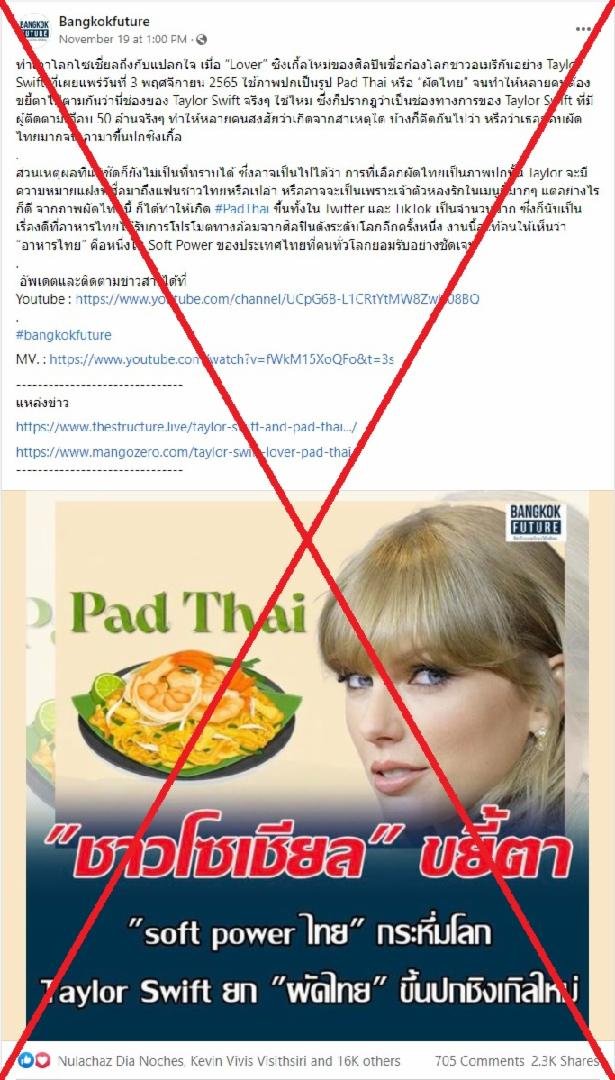 The post continues: "Many people had to rub their eyes and check whether this was really Taylor Swift's channel. Turns out it really is her channel with more than 50 million subscribers, which now begs the question; "why?" Or is it that she really likes pad thai to feature it on her single's artwork?"

Comments on the misleading Facebook post suggested some people genuinely believed the popular Thai cuisine was used as the cover art for Swift's single.

"Pad thai is already well known, but now it has become even more popular, thank you, Taylor," reads a user comment written in Thai.

Another user said: "Happy and proud to see this. Let's help each other, I think (Thailand) has found the right path."

The same claim is being shared alongside similar images here, here, here and here on Facebook, and here in an online article.

The purported screenshot was taken from an auto-generated YouTube video on the platform's official artist channel -- with more than 50 million subscribers.

A reverse image search, followed by a keyword search on Google, found the same pad thai artwork published here on Shutterstock.com, a website for royalty-free images and artwork.

Screenshot of the stock artwork on Shutterstock.com, captured on November 22, 2022

The artwork was displayed on the artist's YouTube video as part of an auto-generated image.

Auto-generated videos on YouTube featuring songs from an artist’s music album are called an "Art Track", according to an explanation on YouTube’s Help Center page.

Art Tracks are "automatically generated" versions of an artist's song from their music album on YouTube, consisting of the song's audio and generated album art.

Swift's single Lover on her official website and Spotify show a different original image for the single's cover art.

Her album of the same name was announced for release on her official Instagram account on June 14, 2019, before it was eventually released in August of that year.