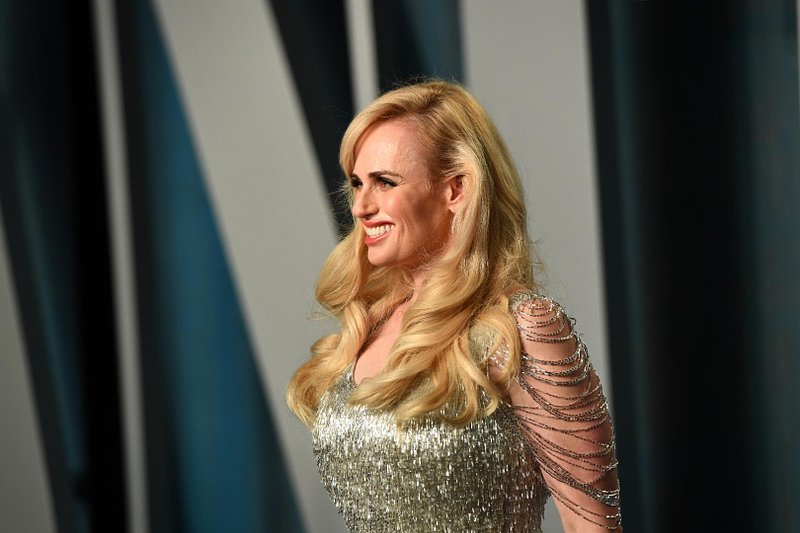 A Facebook post shares what appears to be a news article about Australian actor Rebel Wilson achieving significant weight loss by consuming cannabidiol gummies. But the story is actually an ad for CBD gummies that includes fabricated quotes, doctored images of the star's Instagram posts, and her publicist told AFP its claims are false.

"She's finally sharing the US version of her 'Rapid Diet Solution' that has the world in awe of her controversial weight cut," claims a post on a Facebook page with 700,000 followers.

It links to what appears to be a story about Australian actor Rebel Wilson, with the headline: "Rebel's In Hot Water Because Her New Diet Formula Is 'Too Fast, Easy And Dangerous.'"

The link in the post redirects to either an apparent Time Magazine article or a story made to look like it was published on the website of US broadcaster NBC's Today Show, both featuring supposed interviews with the "Pitch Perfect" star. They include links to order CBD gummies that they claim Wilson used to lose weight.

Wilson has spoken about her recent weight loss and health struggles in interviews with media including People Magazine and the BBC.

But the actor's publicist, Marcy Engelman, said the CBD articles are fabricated.

The quotes using derogatory terms about being overweight that appear in the CBD ad are also false, her publicist confirmed. 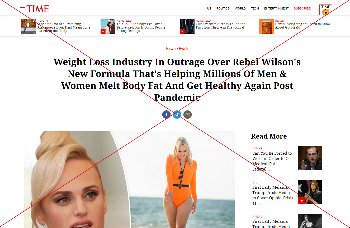 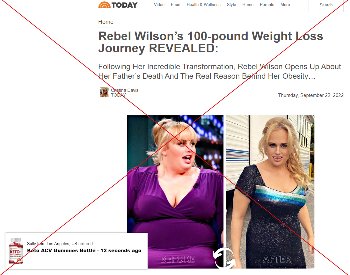 A spokesperson at Time Magazine told AFP it did not publish such article.

At the time of publication, NBC News had not yet provided an answer, but keyword searches showed no matching result on either site.

The articles also include images of Wilson's Instagram posts that have been altered to promote the products. 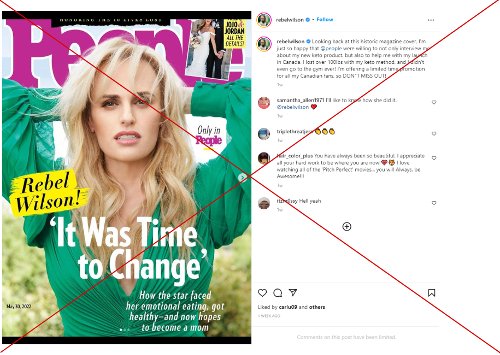 Use caution when buying CBD products

In 2018, Congress allowed farming of industrial hemp and the marketing of products containing cannabidiol. Some celebrities have launched CBD lines in the US, including television personality Martha Stewart and former professional boxer Mike Tyson, but they sell their products on secure platforms.

With other platforms, it is not always clear what is actually being sold. The US Food and Drug Administration lists a series of warnings on its website about companies that made false claims about the pills they are selling and their ingredients, noting they are "unapproved new drugs that allegedly contain cannabidiol," even though "many were found to not contain the levels of CBD they claimed to contain" by the agency, when tested.

Some research has been conducted in recent years about the effects of CBD on diabetic and obese patients, and while the US Centers for Disease Control and Prevention says cannabidiol-based products can induce "changes in appetite," it also warns of the current limited data available on CBD products and their side effects.

The FDA has "approved only one CBD product, a prescription drug product to treat seizures associated with Lennox Gastaut syndrome (LGS), Dravet syndrome (DS), or tuberous sclerosis complex (TSC) in people one year of age and older" so far.

AFP Fact Check has previously identified the fraudulently use of celebrities to sell CBD products, a popular trend among scammers.