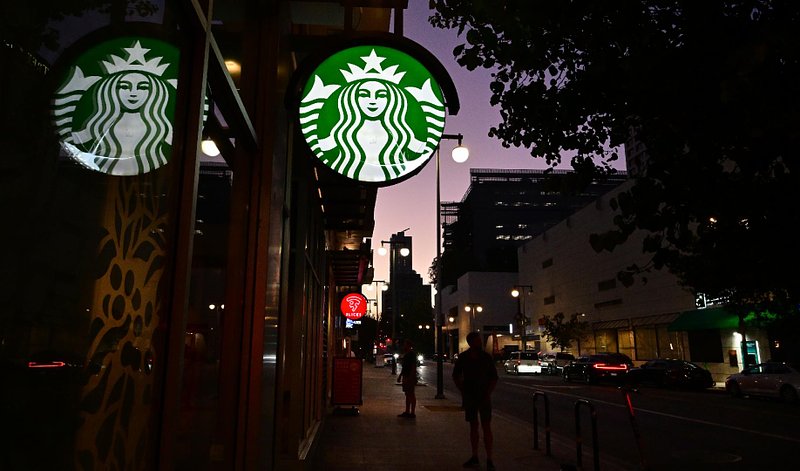 Social media posts claim Starbucks will stop accepting cash. This is misleading; while some individual stores may decide to go cashless, the American coffee company said it has no plans to roll out the policy to all branches in the United Kingdom, Canada or the United States.

The post includes a picture of a sign with the Starbucks logo that says: "We're going cashless. From 1st October 2022 we will only be accepting card, contactless & Starbucks Rewards payments." 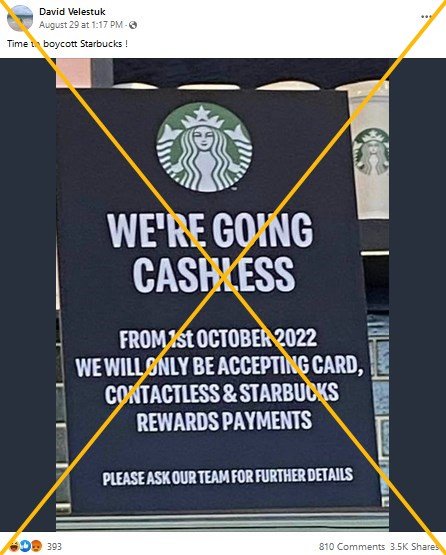 As #boycottstarbucks trended on Twitter, some users suggested the policy was part of a global conspiracy to eliminate cash to exert control and surveillance over the population.

However, the claim that Starbucks will no longer accept cash is misleading.

Some of the posts shared in North America use a cropped version of a photo published in an August 29, 2022 tweet from a user in the UK. Several elements in the original photo suggest it was taken in the country.

For example, the date on the sign is written in British format. Prices are displayed in British Pounds, and a ".co.uk" URL appears under the sign. 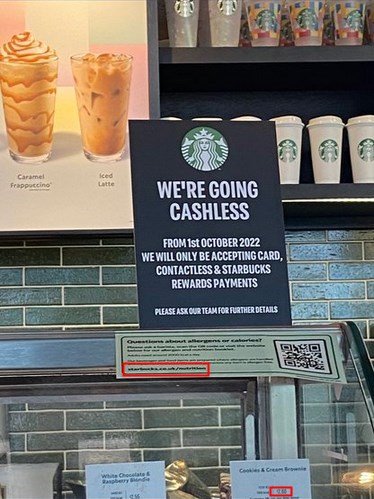 In a statement published August 30, 2022 on Twitter, Starbucks' verified UK account said the chain "has no plans to go cashless" across all stores in the country.

"We operate alongside various licensee business partners in the UK, so this may vary from store to store and the majority of our stores continue to offer cash payment options," the statement says.

A Starbucks spokeswoman added in a statement to AFP that the company "has no plans to go cashless across our UK, US or Canada stores."

Starbucks has previously experimented with cashless stores in the UK and US. In 2017, former CEO Howard Schultz hinted that the company could become a "cashless retailer" in the future.

But Starbucks says on its website that, for now, cash is "always an option." And some US states forbid stores from not accepting cash, in part because it could exclude vulnerable populations.