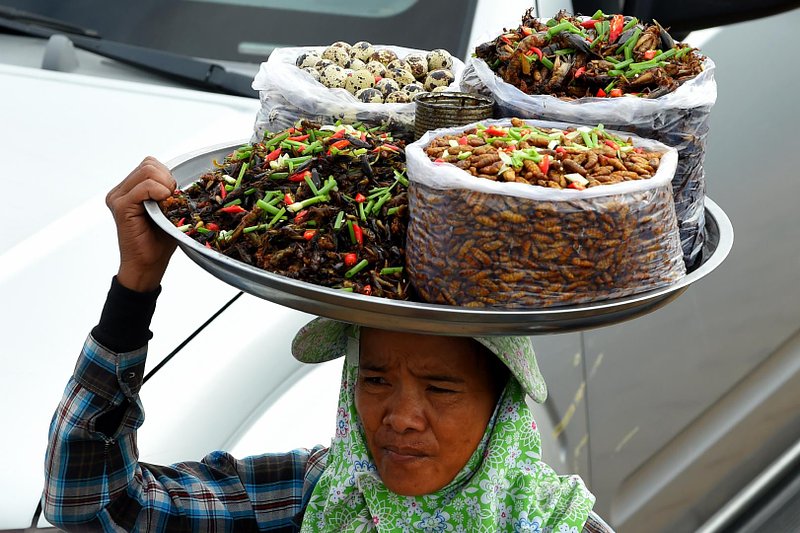 Social media posts say that chitin, a compound contained in insect exoskeletons, cannot be processed by the human body and that bugs are not a food for mammals. This is misleading: while some parts of insects may not be digested entirely by humans, it does not mean that eating them is harmful if handled properly, experts say.

A July 29, 2022, tweet that has been shared and liked thousands of times makes the claim, sharing a screenshot of a text saying:  "This is not food for mammals. Only BIRDS can process insect food in safe conditions. Birds digestion apparatus is COMPLETELY different as ours…” 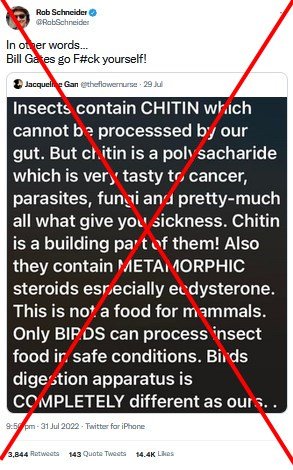 The tweet includes a text that was also shared on Facebook in early August, including in Canada, which says: "Insects contain CHITIN which cannot be processed by our gut."

It continues: "But chitin is a polysacharide which is very tasty to cancer, parasites, fungi and pretty-much all what give you sickness. Chitin is a building part of them! Also they contain METAMORPHIC steroids especially ecdysterone."

It spread amid a flurry of claims that global elites want to force people to eat insects as organizations like the World Economic Forum, a frequent target of disinformation, promoted it as a way to fight climate change because they require less resources than other animal food sources like cattle. Insects have been part of the human diet for thousands of years and are still consumed by billions of people in different cultures worldwide.

The text shared on social media makes several misleading claims, according to experts.

Chitin is the second-most common polysaccharide (after cellulose) found in nature and is part of the exoskeletons of insects as well as crustaceans, fungi, bacteria, yeast and algae, among others. It can be used as a fertilizer, a food additive, and for medical purposes.

Mareike Janiak, first author of a study on chitinase (enzymes that degrade chitin) genes published in 2018 in Molecular Biology and Evolution, said that while chitin may not be fully digestible, that does not necessarily make it harmful to the human body.

"Biologists thought for a long time that mammals did not produce an enzyme that could break down chitin, however, that would not mean that an insect could not be processed by the gut," she told AFP in an email.

She compared chitin to cellulose, making up the cell walls of many plants, for which the human body does not have an enzyme capable of degrading it.

"We still eat things like celery and they are good for us," she explained.

While some parts of vegetables may not be fully digested, the insoluble fibers they contain still contribute to overall health.

"Our guts extract the nutrients from vegetation and pass the indigestible fiber, which keeps things moving along our digestive tract and gives us healthy bowel movements. Lack of insoluble fiber can lead to constipation, for example."

Janiak's research found that primates (the order of mammals to which humans belong), such as mice and insectivorous bats, may use a specific enzyme to digest the chitin in insect exoskeletons, providing potentially significant nutritional benefits.

"People thought chitin was like cellulose for mammals for a long time -- an insoluble fiber that was passed through the gut, while energy and nutrients were extracted from the rest of the insect. However, the discovery of the enzyme "acidic mammalian chitinase" in the stomachs of mice and bats has called this into question and strongly suggests that some mammals can indeed digest chitin," she explained.

"Humans, along with many other primates, have a functional gene for this enzyme, so it's possible that we can actually process chitin in our guts. That said, even if we couldn't, it would just get passed through our system, just like the cellulose in celery and other vegetables."

A literature review published in 2021 in Journal of Functional foods says: "Chitin contains 90.6% of total dietary fiber and it can be defined as a functional food component providing special benefits to food, for instance contributing to colonic health, coronary artery health, and cholesterol reduction amongst many others."

The post also says that insects contain "METAMORPHIC steroids, especially ecdysterone," and that it is "not a food for mammals."

Ecdysteroids are a class of steroid hormones found in arthropods (invertebrates with an exoskeleton), which regulate their development, including molting and reproduction. Ecdysterone can be used as a sports performance enhancer and was found to inhibit the growth of breast cancer cells.

Dominique Bureau, professor at the department of Animal Bioscience of the University of Guelph, told AFP in an email that it is misleading to say that it would necessarily be harmful because "virtually all animal tissues or foods will contain some amounts of steroid hormones."

"Milk, meat, liver, etc. will all contain hormones. Foods of plant origin, like many oilseeds and legumes, will contain precursors of steroid hormones (e.g. phytoestrogens like isoflavones in soybean products)," he said.

He  told AFP in an email that these hormones are indeed present in small quantities in insects, but also in much larger quantities in plants (phytoecdysteroids), including in some of the plants humans consume such as spinach and quinoa.

"These compounds are not toxic to humans and even have interesting anabolic and anti-diabetic properties," he said.

Claiming that insects are not a food for mammals is "categorically false," according to Mareike Janiak.

Anteaters, shrews, armadillos are examples of mammals eating insects, some of them almost exclusively, she explained.

A study published in January 2020 in NFS Journal found that edible insects’ nutritional quality is "equivalent and sometimes exceeds that of animal-based foods."

"This and the fact that edible insects have a faster growth rate, high food conversion efficiency and requires less resources to rear compared to livestock should make them a more attractive quality food source especially to the rural poor in the developing countries."

It notes, however, that while eating insects may be considered safe in countries where entomophagy is practiced, "this is not the case in most developed countries where most consumers are wary of their safety, thus hesitant to include them in their diets."

"The scientific literature on edible insects food safety aspects is limited. There is therefore a need for more research geared towards understanding the risks involved in their consumption to safeguard consumer health," it concludes. 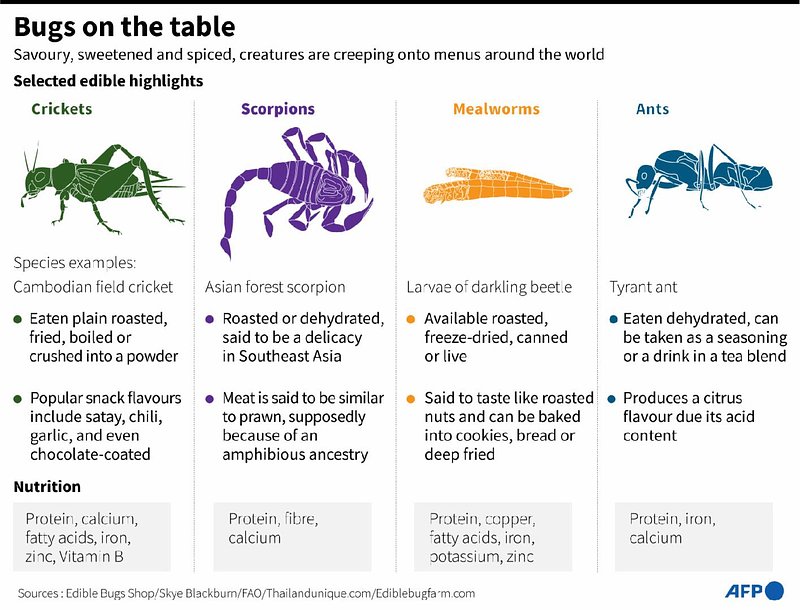 While touted as a way to sustainably increase food supply amid an increasingly warming planet, a report from the Food and Agriculture Organization of the United Nations reminded that efforts have to be made to ensure food safety in the production and consumption of edible insects to avoid allergenic, biological, chemical or physical hazards.

It says risks can be higher when insects are harvested from the wild and consumed raw, and that people allergic to shellfish should not consume some of them.

A Michelin Guide article recommends to find out the insects' origin and cook them thoroughly prior to eating them, just like with any other food ingredient.

The Canadian Food Inspection Agency also says that along with Health Canada, it monitors edible insects for chemical hazards such as pesticides and heavy metals, bacterial hazards like pathogens and other potential food safety issues.