The two sides' forces continued to battle without significant change on the ground on the eastern and southern Ukraine fronts, with preparations building for a fight over the southern hub of Kherson.

"Tonight, about 4.5 million consumers have been temporarily disconnected from energy consumption," Zelensky said in his daily address.

"The very fact that Russia is resorting to energy terrorism shows the weakness of our enemy. They cannot beat Ukraine on the battlefield, so they try to break our people this way," Zelensky said.

For weeks Russian forces have rained missiles and explosive drones onto Ukraine infrastructure, apparently hoping to turn sentiment among the Ukrainian public and its neighbors against the war during the cold of winter.

Russian strikes over the past month have destroyed around a third of the country's power stations. The government has urged Ukrainians to conserve electricity as much as possible.

Ahead of Thursday's meeting of the Group of Seven industrialised powers, German Foreign Minister Annalena Baerbock said the G7 will help Ukraine with items including generators and heaters to survive the winter. 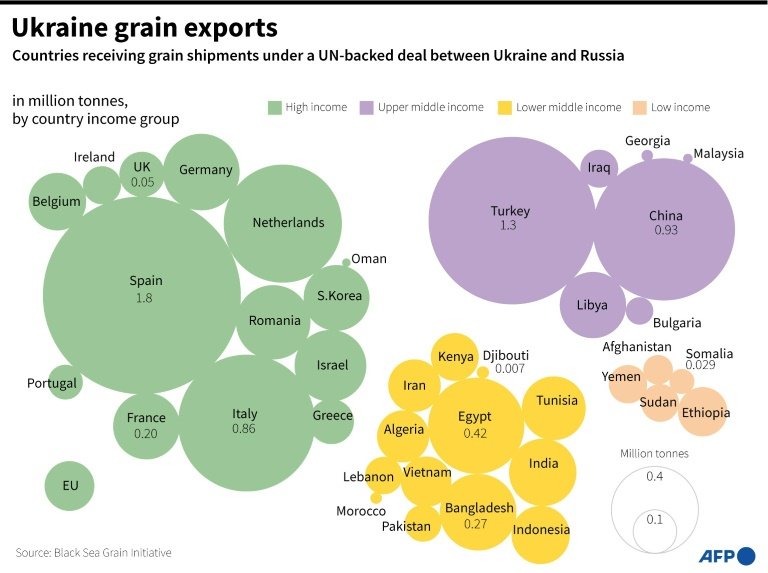 Russia resumed allowing exports of grain and other foodstuffs from Ukraine after a one-day halt, which followed Ukraine's air-and-sea drone attack on Russian vessels in Crimea, which Moscow said was aided by Britain.

The UN said Thursday that seven vessels were transiting through the Black Sea shipping corridor after the trade was resumed.

But Moscow said it had yet to decide whether to extend the grain deal beyond November 19, the renewal date to the agreement brokered by the UN and Turkey.

UN trade negotiator Rebeca Grynspan told reporters in Geneva Thursday that she had "hope that the parties will be responsible and will extend and expand the Black Sea grain initiative".

Ukraine is one of the world's top producers and the Russian invasion had blocked 20 million tonnes of grain in its ports until the safe passage deal was agreed in July. 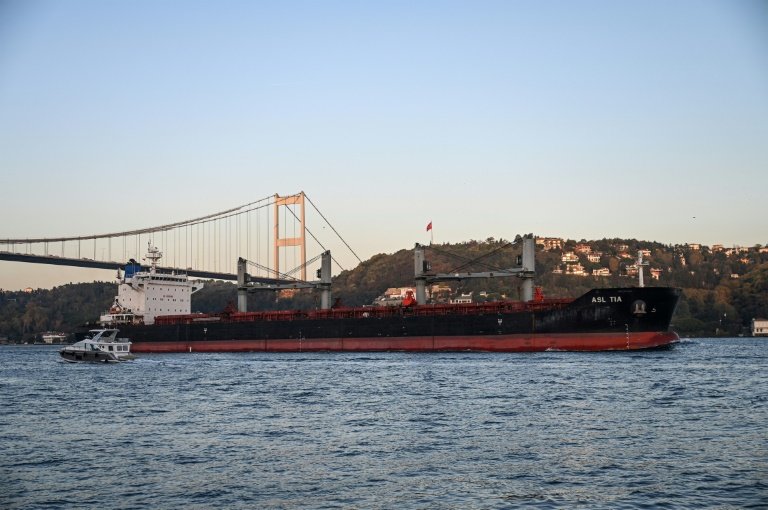 Negotiations underway to unblock fertiliser exports from Russia have made "important steps forward," Grynspan said, but acknowledged there was still a way to go.

Moscow has complained its grain and fertiliser exports continue to face issues over sanctions imposed after its February invasion of Ukraine, despite exceptions made for agriculture-related products.

As fighting focused increasingly on Russia-held Kherson, Kyiv on Thursday condemned the "mass forced relocation" of its citizens living in regions occupied by Russia.

"The Russian occupation administration began mass forced relocation of residents of the left-bank of the Kherson region... to the temporarily occupied Crimea or to Russia," the Ukrainian foreign ministry said in a statement.

"Similar deportations are also being carried out by Russia in the Zaporizhzhia, Lugansk and Donetsk regions, as well as in Crimea." 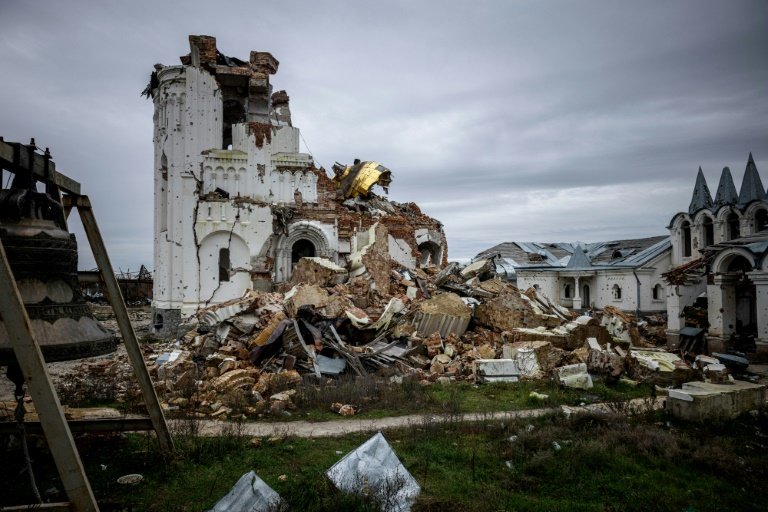 Moscow-installed Kherson governor Vladimir Saldo said he was moving people further into the region or to Russia because of the risks of a "massive missile attack."

Moscow-installed authorities in Kherson said last week 70,000 civilians had left their homes on the right bank of the Dnipro.

Meanwhile, the UN's IAEA nuclear watchdog said its inspectors had found no indications of any "undeclared nuclear activities" at three locations they had inspected in Ukraine.

The inspectors inspected at the sites at Kyiv's request to refute Moscow's allegations that Ukraine was preparing to use dirty bombs against Russian troops.

Kyiv has raised fears Moscow itself might resort to using a dirty bomb in a "false flag" attack.

Zelensky said Thursday that the IAEA's conclusion is "obvious."

"We have given them full freedom of action at the relevant facilities, and we have clear and irrefutable evidence that no one in Ukraine has created or is creating any 'dirty bombs.'" 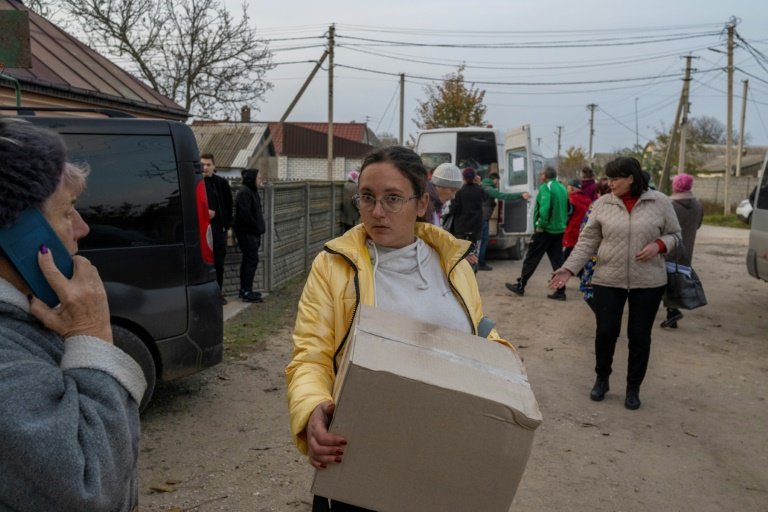 In parts of the south recently recaptured by Ukraine, volunteers said they were concerned by so many residents returning despite the dangers / © AFP

Meanwhile some semblance of normality was gradually returning to areas of southern and eastern Ukraine recently recaptured by Ukrainian troops although the humanitarian situation remains fragile.

In the village of Lymany in southern Ukraine, an aid volunteer said she was concerned that so many residents were returning despite the dangers.

"It would be a lot easier if these people were not out here," said Yulia Pogrebna, 32, as she distributed food boxes to residents.