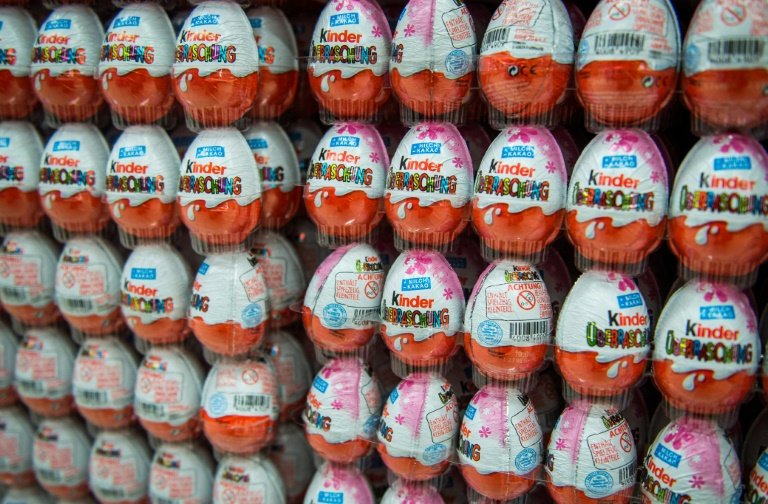 The recall concerns Kinder products from a Ferrero factory in Belgium that were put on sale in Belgium, Britain, France, Germany and Sweden / © dpa/AFP/File

While none of the toy-filled Kinder Surprise chocolate eggs or other products has been proven to contain salmonella, Ferrero told AFP that it issued the recall as a precautionary step.

It concerns products from Ferrero's factory in the Belgian town of Arlon that were put on sale in Belgium, Britain, France, Germany and Sweden.

British authorities warned the public on Saturday about the Kinder products "in connection with a potential link to a salmonella outbreak" that included children and said Ferrero had issued a recall as a "precautionary step".

An official said Tuesday that the number of salmonella cases in Britain had now risen to 63.

In France, 21 cases have been reported and 15 reported having eaten the Kinder products that have now been recalled, according to the French public health service.

The median age of those stricken is four years old.

Salmonella is a type of bacteria that can cause symptoms including diarrhoea, fever and stomach cramps in humans, and is one of the most common food-borne infections.

"None of our Kinder products put on the market have tested positive for salmonella and we have not received any complaints from consumers," the company said in a statement released Monday on its French website.

The recall concerns the original 20-gram Kinder Surprise milk chocolate egg that contains a small plastic capsule with a toy inside, as well as a larger 100-gram version, with last sale dates between the end of June and end of October 2022.

Kinder Schoko-Bons, Kinder Mini Eggs, Kinder Happy Moments, Kinder Mix and a number of other products have also been recalled.