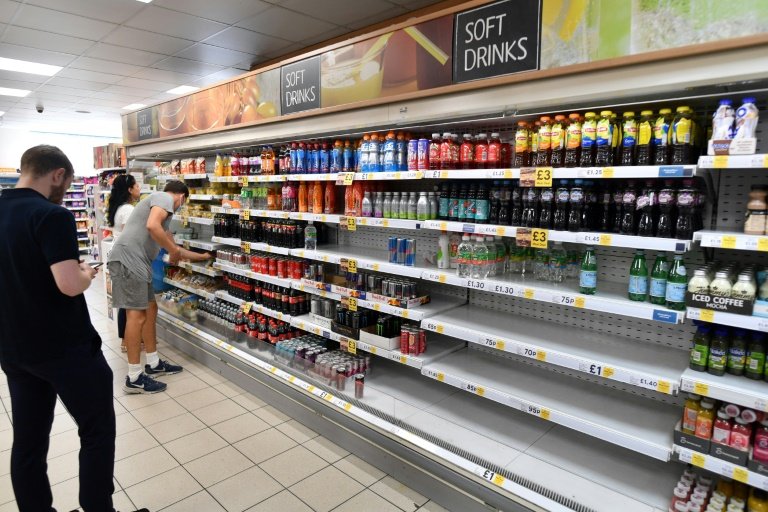 British supermarkets and suppliers warned Thursday of possible food shortages due to staff self-isolating, as rising coronavirus cases threaten chaos after the government controversially eased all restrictions earlier this week.

With millions of workers and school children currently forced to stay home under Covid-19 tracing rules -- in what has been dubbed a "pingdemic" after the phone app used to contact, or ping, people who need to self-isolate -- various industries are starting to suffer.

Newspapers showed photographs of empty supermarket shelves, as missing staff at stores and in supply chains hit retailer's operations -- with some even closing outlets.

"We've kept all of our shops open throughout the pandemic, but now we have had to close one or two shops and reduce hours in others," Richard Walker, managing director of frozen food retailer Iceland, told BBC radio.

"That could get a lot worse a lot quicker, unless the country's system is sorted out."

Rod McKenzie, managing director of policy at the Road Haulage Association (RHA), said the UK was already struggling with a shortage of lorry drivers due to Brexit and that isolation issues were now "a recipe for chaos".

The government on Monday eased all virus curbs, including the legal requirement to wear a mask in certain settings and social distancing rules, just as new cases are surging towards levels not seen since peaks in January.

Prime Minister Boris Johnson argues that the country's vaccination programme, which has jabbed nearly 70 percent of adults with two doses, allows for the relaxation of measures.

But the surge in infections, averaging nearly 50,000 a day during the most recent week, has led to a dramatic increase in people told to self-isolate by tracing officials from the National Health Service (NHS).

The prime minister is under growing pressure to widen the list of jobs that are exempt from the isolation rules.

The CEBR think-tank forecasts that his isolation policy could cost the UK economy £4.6 billion ($6.3 billion, 5.4 billion euros) in losses without changes.

Tony Danker, director-general of the Confederation of British Industry (CBI), said the current approach was "closing down the economy rather than opening it up".

"Businesses have exhausted their contingency plans and are at risk of grinding to a halt in the next few weeks," he warned.

Johnson has so far proved reluctant to change the policy.

His spokesman told reporters the government was "working closely" with impacted industries, and long-awaited updated guidance on how firms can exempt more key workers from isolation would soon be published.

"We have a robust and resilient food supply chain in the UK," he added.

The spokesman said the current rules, set to change on August 16 when fully vaccinated adults can take daily tests rather than isolate, were "an incredibly important tool" to curb climbing case rates.

The government has also been criticised for providing mixed messages on the need to stay home if contacted by the tracer teams.

While some ministers have insisted people must isolate if advised, two business ministers this week noted there is actually no legal requirement to isolate if they are pinged by the NHS app.

Only those contacted by the separately run NHS Test and Trace service must stay at home for 10 days by law.

The public already appeared increasingly sceptical of the isolation rules following the easing of restrictions, with reports many people are deleting the app or ignoring advice.

A poll on Monday reported half of Britons said they would be unlikely to self-isolate if they had a negative rapid test after coming into contact with someone with coronavirus.