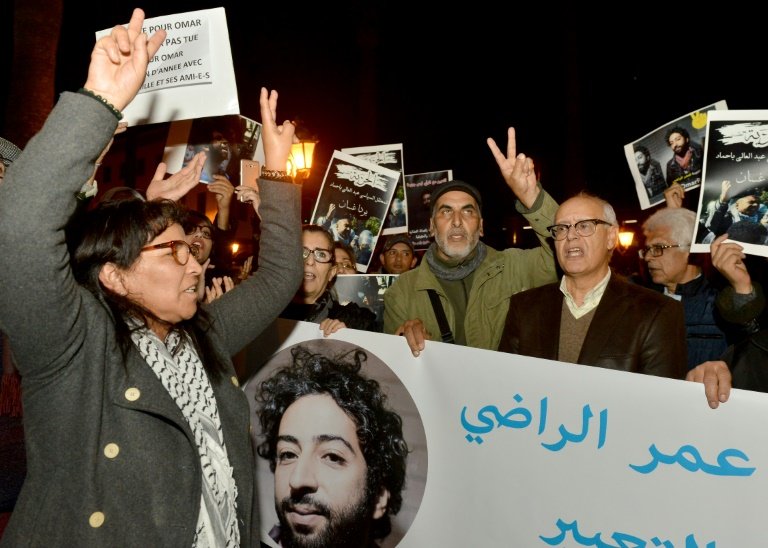 Amnesty has accused Morocco of putting spyware on the phone of Omar Radi, a journalist jailed over a social media post whose case has sparked protests / © AFP

Amnesty said in June the Moroccan authorities used software developed by Israeli security firm NSO to insert spyware onto the cellphone of Omar Radi, a journalist convicted in March over a social media post.

The Pegasus software can switch on the phone's camera and microphone as well as access data.

If the international watchdog fails to provide evidence, the kingdom "will take the necessary steps to defend its national security" and "clear up public opinion" on the allegations, Prime Minister Saad-Eddine El Othmani said in a statement carried by the Moroccan Press Agency on Thursday.

Last week, the Moroccan authorities said they summoned the local director of the London-based group to demand proof about the "serious and tendentious accusations", but did not get a response.

Without proof, Amnesty's allegations amount to "an unjust international defamation campaign dictated by an agenda having nothing to do with human rights", the statement said.

It went on to denounce the organisation's "systematic and continual persecution against Morocco's interests".

In addition, Morocco "does not have at its disposal NSO technology", a senior government official told AFP on condition of anonymity, referring to the Israeli security firm.

Thursday's statement said the journalist is "undergoing a judicial investigation for suspected breach of state security, because of his links to a liaison officer of a foreign country".

It said the alleged foreign agent has "worked under diplomatic cover since 1979 in several regions of tension" around the world.

Last week, Radi told AFP the legal action was connected to the Amnesty report, denouncing the allegations against him as "ridiculous".

Amnesty said he had been "systematically targeted by the Moroccan authorities due to his journalism and activism".

In March, he was given a four-month suspended sentence for criticising a judge in a tweet.

NSO is being sued in the US by messaging service WhatsApp over alleged cyber-espionage on human rights activists and others.

The Israeli firm says it only licenses its software to governments for "fighting crime and terror" and that it investigates credible allegations of misuse.