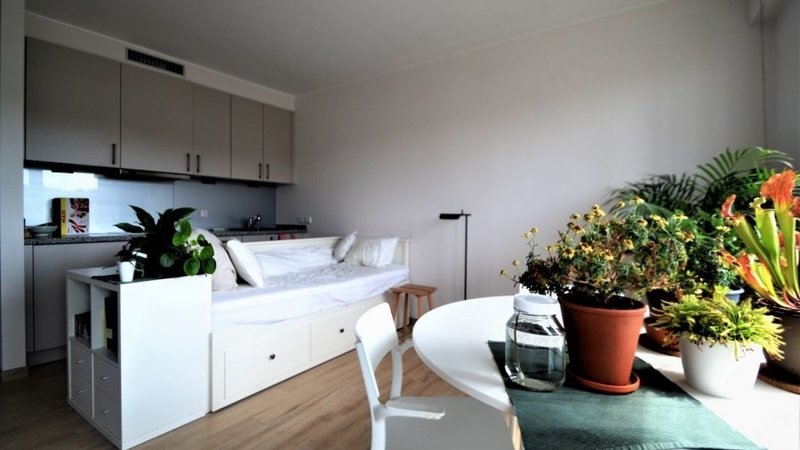 Why have an actual bed when you can live in Hollerich?

An apartment - if we can really call it that - on the real estate website Athome.lu has made the rounds on social media, but not for the right reasons. This 28 square metre flat located in Hollerich can certainly be described as 'cosy' in a Luxembourgish twist on Vice's popular London Rental Property of the Week series.

Comparing the apartment listing with some of the London versions, you might at first glance say 'Well, this one does't look too bad.' But not being as bad as other properties doesn't necessarily make this one good. Let's break it down. We look at the living space, which quite generously has a table with two chairs and a perhaps ridiculous number of plants for the space. And then we've got a nice sofa so the homeowner can take in the views whilst having a cup of coffee - oh wait, this is a daybed, not a sofa.

Making use of some clever photo angles to grow the space, it appears. / © Athome.lu
© Athome.lu
The photos published on this site are subject to copyright and may not be copied, modified, or sold without the prior permission of the owner of the site in question.

The flat has been equipped with what looks to be an IKEA daybed, ingeniously presenting itself as both a sofa and a bed. So effectively, if you're lounging in bed and want to just chuck your mug into the sink, you stand a good chance of hitting your target because it's really not that far from the bed/sofa. Perhaps you could even reach over and get to the sink? It is entirely possible. And daybeds are just simply the best of both worlds: you can hide your pyjamas in one of the drawers underneath when you have guests  and then also push all your other furniture against the windows if you want to stretch out in bed.

We hope that whoever has purchased this flat intends to kit it with something more substantial than a day bed, which is after all designed for the occasional kip rather than in lieu of a bed. At the very least, the bathroom doesn't look too small?