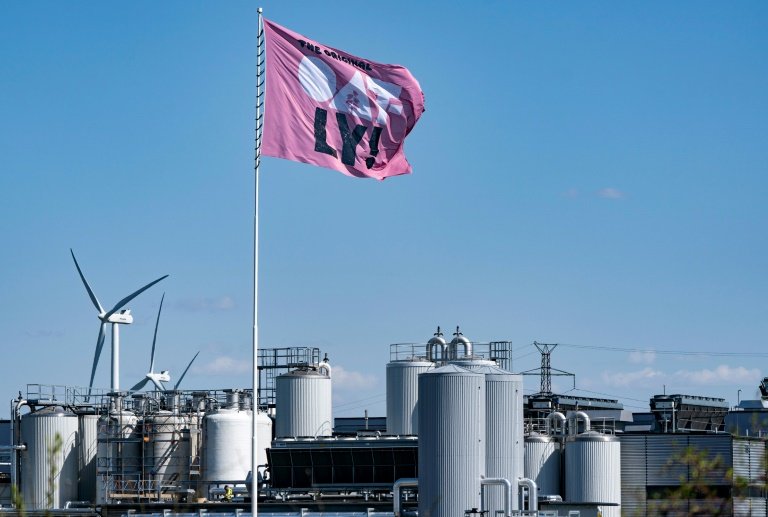 A flag flies over the Swedish oat milk producer Oatly factory in Landskrona, Sweden on May 20, 2021 The Oatly IPO priced late Wednesday at the high end of its expected range ahead of the vegan dairy company's trading debut, as alternative milk products, once banished to health food stores, go mainstream. / © TT NEWS AGENCY/AFP/File

This week's rousing stock market debut of dairy alternative Oatly underlines anew people's enduring appetite for vegan products. If anything, that hunger has grown during the Covid-19 pandemic.

Following a heady Nasdaq debut on Thursday and another surge in Friday's session, the Swedish food company is now valued at about $13 billion, a lofty level for one that took in $421 million in revenues last year from sales of oat-based milk, ice cream and other products not made with space-age technology.

Oatly is far from alone in the emerging space.

Earlier this month, Nestle launched a new non-dairy milk made with peas, adding to a slate of plant-based options for burgers, sausages and tuna.

At its vast chain of coffee shops, Starbucks now offers four creamers made from something other than cow's milk: soy, almonds, coconut and, since March, oats.

And in Singapore, since December consumers have the option to purchase lab-grown chicken composed from animal muscle cells.

The alternative food industry was already on the rise before the pandemic, with startups like Beyond Meat and Impossible Foods winning praise for vegan items that surprised many consumers with their likeness to meat in terms of taste, odor and texture.

In April 2019, Burger King made waves after launching the first vegan version of its popular "Whopper" sandwich. Since then, most big fast-food chains have followed suit, while producers have joined Nestle in introducing meatless supermarket products.

During Covid-19, meat alternatives enjoyed a temporary surge in interest as some consumers sought healthier products. Sales of Beyond Meat products spiked initially before moderating.

"The pandemic opened people's eyes to the risks of the meat industry, the relative fragility of its value chain," said Jan Dutkiewicz, a fellow at Concordia University and Harvard Law School who writes often on food and environmental studies.

Investor interest in alternative meat is keen in part because of the environmental costs of conventional meat production, as well as concerns about animal welfare.

Investments in alternative food tripled in 2020 to $3.1 billion, according to the Good Food Institute, a nonprofit.

Sales of meat alternatives jumped 45 percent in 2020 in the United States, but still account for only 1.4 percent of total retail meat sales, according to the Good Food Institute.

History shows it can be difficult for food substitutes to achieve sustained success, said Nicholas Fereday, an analyst specializing in consumer foods at Rabobank.

Despite the success of products like aspartame and stevia, sugar remains the dominant coffee sweetener, he said. And for now, nobody has been able to simulate popular items like roast beef or grilled pork with a vegan option.

"Environmental and animal welfare concerns will trigger interest among people who are looking for brands that align with their values and encourage the initial purchase," Fereday said, but they will only keep buying if they like the product.

Dutkiewicz drew a comparison with large automotive companies now phasing out the internal combustion engine and transitioning to electric cars.

But, he cautioned, "we are at the very, very early stages of this."