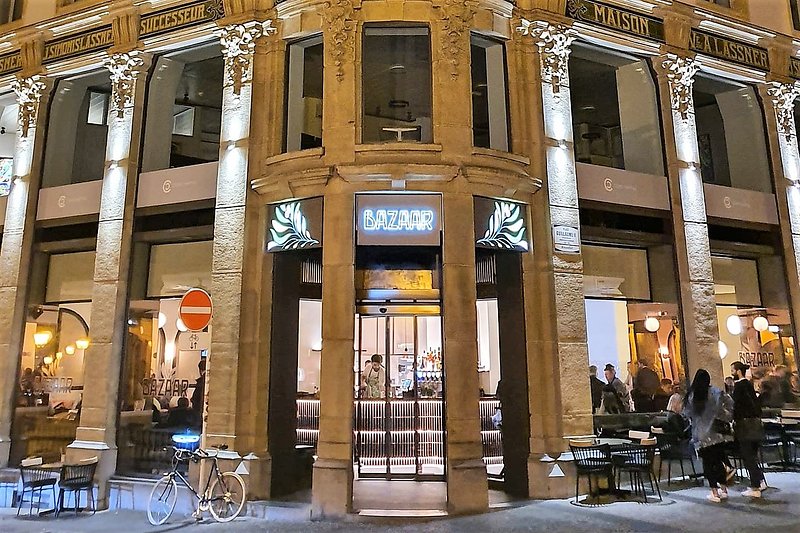 The bar and restaurant Bazaar has recently opened on Place Guillaume II as another cog in the constantly-changing machine that is Luxembourg City's food scene.

After Wëllem opened on Place Guillaume II, a new kid has joined the block. Bazaar's home is what used to be a toy and homeware shop, then followed by a phone shop.

The brainchild of the group behind Paname and Urban, Bazaar will quickly find its regular customers. The bar and restaurant has a neat design, original cocktails, sharing dishes, Mediterranean inspiration, and a terrace which will become extremely popular, especially on market days.

Brothers Tom and Ray Hickey, alongside Gabriel Boisante and Joao Russo, based their new idea on the concept of a market - a pleasant space to eat and drink at any hour of the day, to celebrate, and to dance in the evening. Good news for those of you who get peckish later on in the day: the kitchen will remain open until midnight.

The food itself guarantees a change of scenery via the Mediterranean and, in particular, the Levant: the main flavours come from Lebanon, Syria, and Israel, albeit accompanied by Greek and Italian touches. Mezze reigns at Bazaar, making sharing plates a necessity.

Our colleague at RTL 5Minutes was able to sample the food, testing the cauliflower 'steak', complemented by tahini, pomegranate seeds, and herbs and spices that immediately transport you to Jaffa in Tel Aviv. Bazaar also has a selection of hummus on offer, either with nduja or combined with peanuts. Other highlights include falafel, kofta, artichokes, crispy halloumi, and herby taboulé.

For the less daring, Bazaar's menu also has octopus, cod, lobster, and chicken dishes, all of which are as mastered by the chefs as their other food. For those with a sweet tooth, baklava, rice pudding, and profiteroles should sate that craving.

Drinkswise, Bazaar has a formidable list of gins alongside original cocktails emphasising either herbs (a dill spritz, tarragon in the Tel Aviv 75, rosemary in the Let's Figure Out) or fruit (dates and prunes in the Rock the Casbah, orange in the Didn't We Meet At Skorpios, and pomegranate in the Tommy Would Be Jealous).

The restaurant's decor both plays on oriental inspiration and the building's historical art deco roots. The intimate basement room is incredibly cosy and available for private bookings.