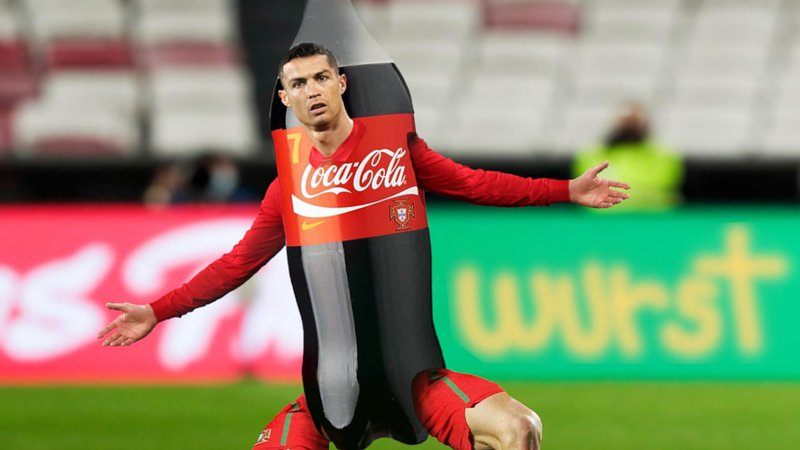 Following a snub in which high-profile Euro 2020 players moved strategically placed sponsored products during a press conference, the aggrieved companies have announced they are plotting revenge.

“Cute stunt Ronaldo, but we’ve got you and your little sports league right by the contract,” said Coca-Cola spokesperson Jacqueline Brand. “If you don’t want to face serious litigation, you’ll do exactly as we say.”

“When you play your next match, you will be dressed as a giant bottle of the world’s most beloved soft drink,” she continued. “When you score your next goal, you’ll look at the camera and say, ‘Who wants boring old water? I would love some refreshing Coca-Cola.”

Other sponsors have followed suit. Beer company Heineken, which was targeted by French player Paul Pogba, announced that the midfielder must now wear a green Heineken cardboard box instead of shorts, and a box on each foot instead of shoes.

“And he’ll wear another box on his head,” said Carl Bouze, Vice-President of Global Communication. “It can function as a helmet. He’ll be able to head the ball without fear of bashing his skull against someone else’s.”

Another sponsor, the video-sharing company Tiktok, says that even though they’ve not been the victim of disrespect, each time a goalkeeper blocks a shot, that team’s coach has to make a Tiktok video of himself dancing as if he were just struck by lightning.

UEFA PR officer Eduardo Balon says that organizers are taking action to ensure that no more snubs occur and that sponsors get their money’s worth.

“One of our valued partners is Vivo, and I honestly have no idea what they do,” Balon said. “Anyway, instead of players singing their national anthems, they’re going to sing praises of Vivo, and how cool the name Vivo is, and how they wish they knew what Vivo is.”

Even though many players have expressed frustration that they’re being turned into living billboards, others say the efforts to satisfy sponsors comes with added benefits.

“Look at me,” said one player from Italy who was obliged to wear miniature wings and the tiny engine of a Qatar Airways airliner. “I can fly.”