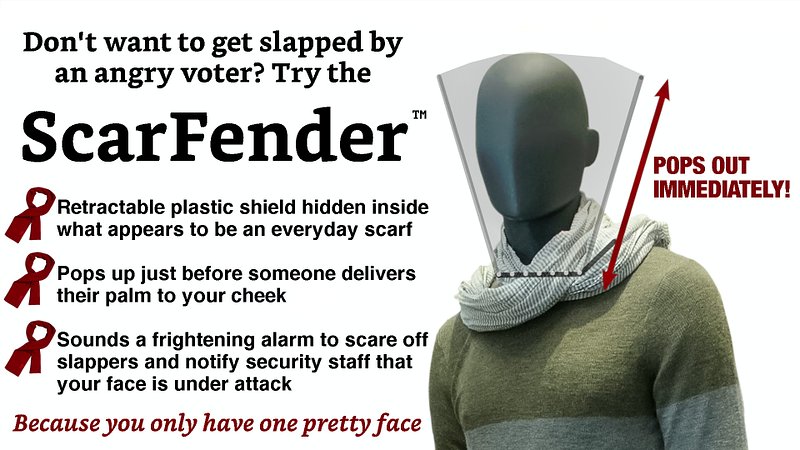 Following an incident in which a member of the public slapped the French president, Luxembourg’s prime minister will now wear a defensive anti-slap scarf.

“This baby might look like an everyday neck adornment, but trust me, it’s fitted with the latest in anti-slapping technology,” said defensive scarf salesman Gus Burlee. “Prime Minister Xavier Bettel will have the safest face in the land.”

The item, called the ScarFender, was originally developed by the U.S. Secret Service and fashion designer Tom Ford for use by U.S. presidents, but the project was shelved after it was remembered that American leaders prefer nude necks.

Woven into the material are sensors that detect insults in as many as 56 languages, a sudden increase in anger-related temperature, and of course an approaching palm.

“If anyone’s hand gets within 15 centimeters of Mr. Bettel’s cheek, a hard plastic shield will instantly pop up, protecting his face and dignity while teaching the attacker a painful lesson,” Burlee said.

As soon as the shield pops up, a panic-inducing alarm will sound to get the attention of security staff, and Burlee says the noise will be customizable.

“In the case of a Luxembourgish leader, it could be a cacophony of languages, the brain-whacking toll of morning church bells, or the clamor of a construction crew jackhammering and shouting outside your window at 7 a.m.”

Burlee says that because contact with adoring residents and fans is of utmost importance to Bettel, the ScarFender will come with a voice-activated switch to temporarily turn off the defenses.

“This is vital in case Prime Minister Bettel is at a party and a friend wants to deliver a playful pinch on the cheeks, or if he’s getting his teeth checked and he doesn't want his dentist to lose a hand.”

While some say the ScarFender has too many components that are likely to malfunction, others say that it’s better than nothing, and that in any case, if a slapper approaches, Bettel could always remove the scarf and use it like a whip.