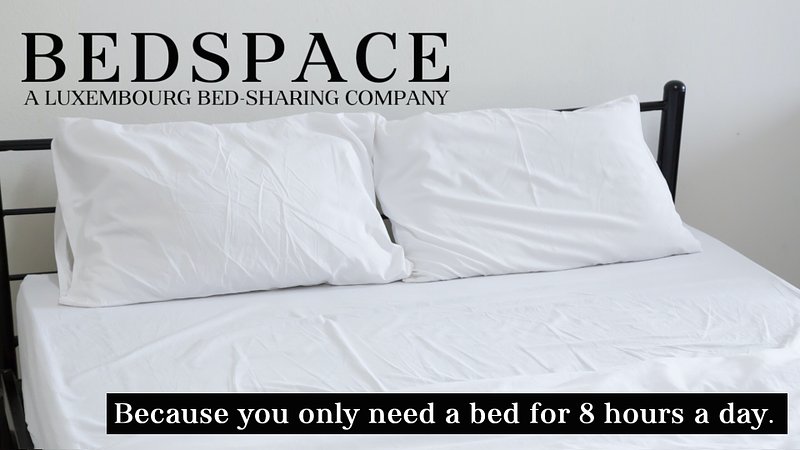 Like office sharing, bed sharing is an attractive option for students, freelancers just starting out, or anyone earning less than 1.5 times the legal minimum salary.

“I was making 2200 euros a month, and half that was going for a cramped bedroom in an apartment in Gasperich that I rarely saw,” said Ulf Olsson. “I thought, why am I paying for a bed for 24 hours a day when I only use it for eight?” Olsson created Bedspace, which matches people who don’t need their beds between 5 a.m. and 2 p.m., for example, with someone who would like to doze at that time.

“We clean the beds after each use, but you can usually smell the person who was there just before you,” he said. “Which is kind of fun, like a guessing game. Who is this mystery snoozer? Why does the bedroom smell like sardines, mint, and sawdust?”

Another start-up, this one specializing in co-sleeping, also hopes to take advantage of the lack of cheap accommodation near the capital.

“People who sign up for our co-sleeping service get their very own dedicated corner of a large bed, which is available to them whenever they want,” said Callie Bakirtzis, founder of Merl-based SleepMate. “We only ask that people keep their feet pointed toward the center of the bed so no one rolls on each other.”

Another recently launched company, Co-Nap, offers yet another slumber arrangement for individuals who are willing to sacrifice uninterrupted sleep in order to save money.

“With us, you don’t have a dedicated sleeping time, a fixed bed, or even a fixed address,” said CEO Jean-Luc Dormer. “Instead, when a bed becomes free somewhere in our network, you get a message and can take a nap there for up to four hours.”

“Which is a great, cheap alternative for insomniacs, spiritually advanced monks who spend most of their time praying, or junior lawyers who are expected to be in the office 20 hours a day.”