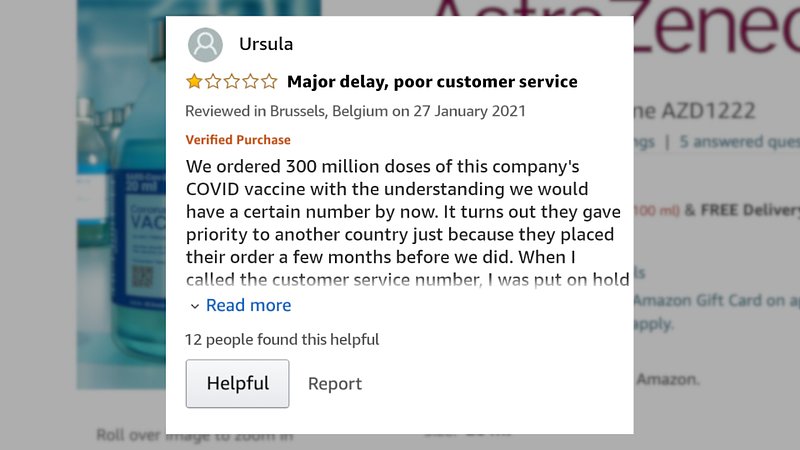 Insisting that a powerful trading bloc such as the EU deserves to be treated much better, European Commission President Ursula von der Leyen has given AstraZeneca a one-star review on Amazon.

“We ordered 300 million doses of this company’s COVID vaccine with the understanding we would have a certain number by now,” she wrote in a review of the AZD1222 vaccine. “It turns out priority was given to another country just because they placed their order a few months before we did.”

“When I called the customer service number, I was put on hold for ages,” she continued. “I finally spoke to a representative, but this individual was not helpful, and instead of making an effort to expedite delivery, he came up with a ridiculous excuse about production glitches.”

“Totally unprofessional,” she added. “It seems like this company has never dealt with a major vaccine rollout during a global pandemic before.”

Sources indicate that after leaving the review, von der Leyen wrote the company an angry email in which she demanded they bump her to the front of the queue.

“Beware of this company,” an individual believed to be von der Leyen later wrote in a different review under a false name. “I’d find another seller if I were you.”

Not all customers have given AstraZeneca such a negative review. One buyer form the UK named B. Johnson gave the company five stars and described the service as “impeccable,” noting that his orders were being fulfilled ahead of schedule and that he had received a free tote bag and pen with each dose.