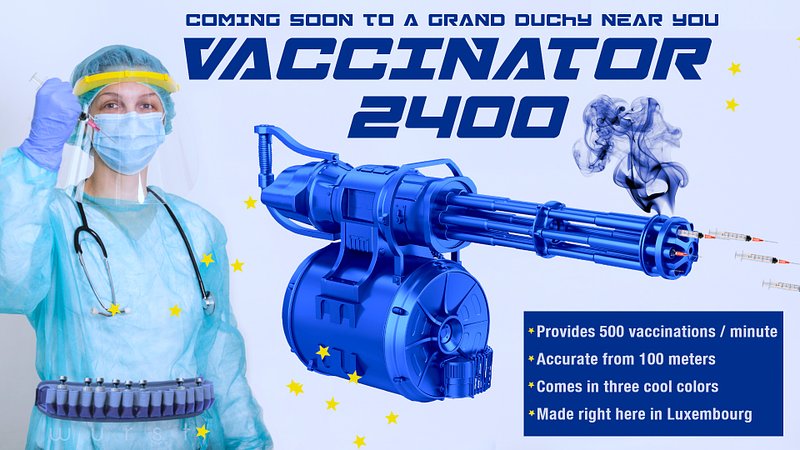 Citing the need to reopen society as soon as possible before we all lose our minds, an engineer from Luxembourg has developed a vaccination gun capable of delivering 500 shots per minute.

“I read that it might take months to get most of Luxembourg vaccinated,” said Jean Wayne, creator of the Vaccinator 2400. “That’s not fast enough.”

“It’s become so bad, I’ve started having long conversations with my cat,” he said. “And I don’t even have a cat.”

Operated by a hand crank, the device works much like a Gatling gun and can fire rounds from any of the major vaccine makers.

Experts say that with just one Vaccinator 2400, a skilled nurse could vaccinate 50,000 people per day, taking into account time to reload the drum and smoke a cigar like some kind of tough 1920s gangster.

Officials say that if they choose to use the device, they will ask everyone to head to Luxembourg City, line up on Avenue John F. Kennedy, and expose one buttock so a nurse can give them the shot while he or she sits in the back of a passing vehicle.

Alternatively, some medical professionals suggest they could make a game of it, encouraging people to run around in a field while doctors and nurses take aim, giving everyone much-needed exercise as well as a break from the crippling mix of fear and boredom.