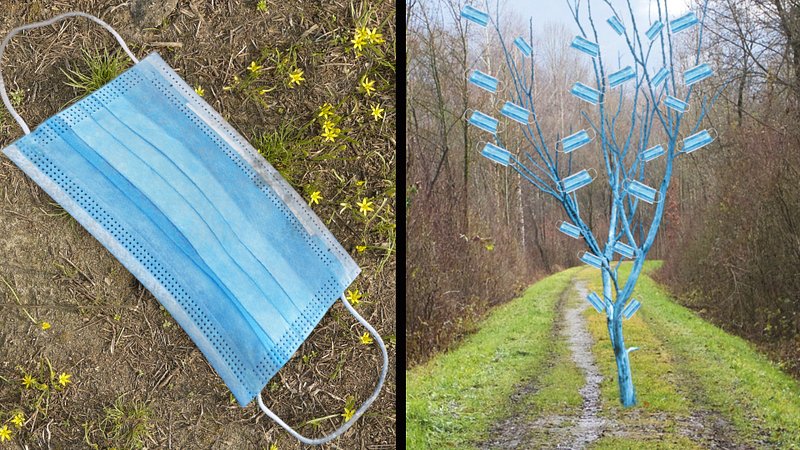 In what’s being called “The Miracle in the Mullerthal,” a mask that was discarded along a trail several months ago has grown into a wonderful little mask tree.

Nature enthusiast Damian Walker first observed the light-blue piece of safety gear during the summer. When he again followed the route earlier this week, he passed the same spot.

“To my great surprise, not only was the mask still there, but it had grown into a beautiful blue tree that was budding hundreds of tiny new masks,” he said.

“Back in August, I was furious that someone would dishonor Mother Nature by throwing a pair of polypropylene face panites on her,” he continued. “But now I see that the person who did this has a far deeper understanding of the mysteries of nature than I ever will.”

The tree has become a shrine and a destination for pilgrims, many of whom are now devout believers in the inherent goodness of plastics.

The phenomenon has also become a source of encouragement for those who wish to give Mother Nature offerings of soft drink bottles, cigarette butts, and hamburger wrappers, but suffer from doubt.

“Ever since I read about the wondrous mask tree, I’ve been burying my old electronics in the Bambesch,” said one convert. “I’m praying they will grow into a new Playstation by next spring.”

The mask tree is the second case in recent memory of a man-made object growing into something bigger and better.

Several years ago, a single new residential unit on Rue Joseph Junck in the capital was built and then forgotten, but within a few months it had grown into several new modern residential complexes, a fitness club, and an organic food shop.