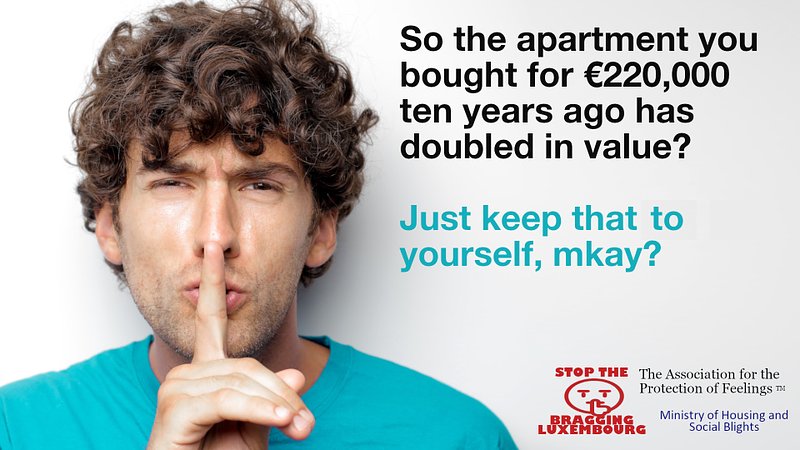 Admitting that it’s impossible to make housing in Luxembourg more affordable, officials are instead asking everyone who already owns a home to shut up about it.

“The housing market is out of our control,” said Ministry of Housing and Social Blights spokesperson Felix Oberpries. “It’s too strong. It’s like those bodybuilders who used to play bad guys in 80s action movies, all pumped with steroids, veins bulging out of their necks.”

The only solution, says Oberpreis, is for property owners to stop making other people feel bad about not having bought a home when prices were lower.

“If someone who pays a fortune every month to rent a studio in Differdange starts complaining to you, just keep your mouth closed,” Oberpreis said. “There’s no need to tell her about the two-bedroom flat in Eich you brought for 220k only 10 years ago that has already doubled in value.”

Still, not everyone agrees that it’s in the best interest of society to ask property owners to deceive others.

Luxembourg City resident Herman Steeraich says that while he sympathizes with those who will never own a place within 50 kilometers of their place of work, bragging about how little you paid before the market exploded is a local tradition.

“Take my grandparents, for example,” Steeraich said. “In 1972, they bought a mansion in the Pfaffenthal for 100 Luxembourgish francs, a pair of old socks, and a really pretty blue rock my grandad found in the Alzette.”

“A generation later, the house was worth 20,000 francs and a hundred pairs of new socks,” he continued. “My grandfather would tell his barber, the rubbish collector, and anyone who’d listen about his good fortune.”

“Am I not allowed to carry on the tradition?” he added. “Must I keep it a secret that we’ve just sold that same house for 10.4 million euros and that my siblings and I are thinking of using the money to buy an entire province in Italy?”