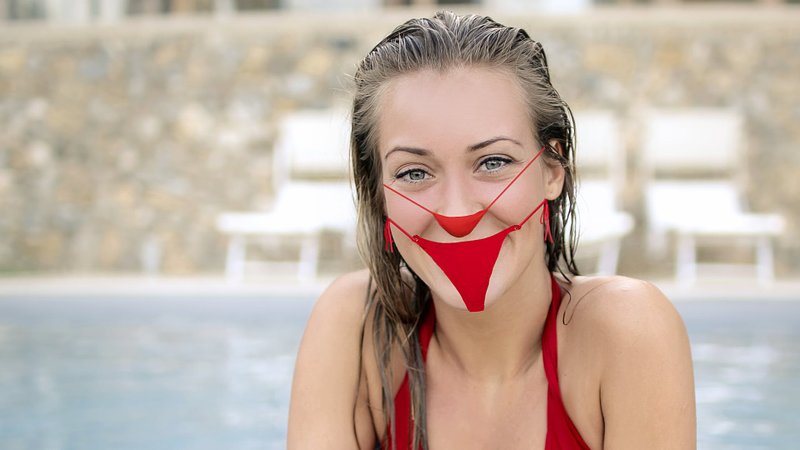 As Europeans flock to crowded beaches despite an ongoing pandemic, many women are wondering how they can stay safe without looking like a dentist about to perform a root canal.

The answer, says Dudelange-based fashion designer Antoine Fabret, is to get rid of those shapeless one-piece face masks that your great-grandma wore during the time of the Spanish Flu.

Fabret has created the face maskini, a sizzling two-piece protection system that’s modelled on the bikini, which revolutionized swimwear when it was released nearly 75 years ago.

“Today’s hygiene- and fashion-conscious women want more than just an ugly polypropylene rectangle to create a barrier between themselves and others,” Fabret said. “They want something that will stop virus particles and allow them to show off those cute little dimples they’ve been developing for months with the help of daily face exercises.”

Luxembourg City resident Rumina Doppelklang, 29, who’s planning a trip to Sardina with some friends at the end of August, says she’s excited about slipping into a face maskini.

“No more wearing something that looks like it came out of a hospital laundry bin,” she said. “I want the world to see my beautiful chin, which, incidentally, I had surgically redone just last year.”

Kopstal resident Natalya Gideon, 38, who’s been wearing a face maskini when she takes her children to the swimming pool in Niederanven, describes the item as a life-saver.

“When I used to wear that stupid medical mask, nobody would even look at me while I was suntanning,” she said. “Now they all turn their heads and stare.”