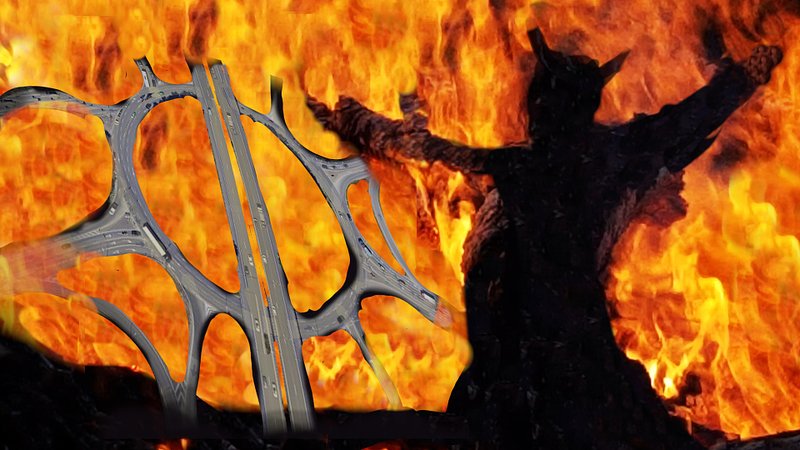 Saying the diabolical traffic knot is too evil to be wasted on living souls anyway, the guardian of the underworld known as Satan has reclaimed the old Irrgarten roundabout.

The roundabout was created millenia ago by a cadre of demon road engineers whose goal was to torture carriage drivers condemned to Hell, but it was eventually sold in auction to make room for a new lake of ice.

Luxembourg traffic officials bought the roundabout and placed it near the A1 motorway in Hamm as a source of amusement, and for years they would bet how many hundreds of cars would get stuck in it every morning.

Unfortunately, due to the recent construction of a so-called turbo roundabout, the old roundabout was dismantled and sold back to Hell for a bargain price.

“The Prince of Darkness always regretted losing that infernal circle,” said spokesdevil Marvo Malum. “He was very fond of watching the eternally damned get stuck in it for months or years at a time, which always gave him a good laugh.”

“Hell was never the same without the roundabout,” he continued. “It was a much less terrifying place.”

“Not that we didn’t try,” he added. “Everything from metallic harpies that eternally peck out the eyes of the condemned, to socks that immediately slip down and get all bunched up in your shoe.”

Sources say the roundabout has already been placed in the lowest circle, where it is allegedly the most feared form of retribution.

“Do I prefer being stuck for eternity in a frozen lake, a fiery tomb, or a swamp of sewage,” said one damned soul. “Or do I want to be stuck in a forever unmoving traffic jam a kilometer from work and 100 kilometers from home?"