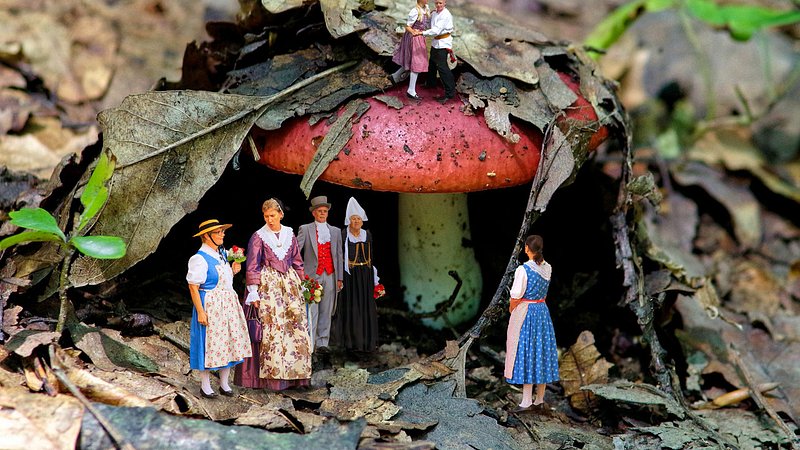 MULLERTHAL – Saying “well, it was rather obvious,” a group of hikers in Luxembourg’s region known as Little Switzerland have discovered hundreds of tiny Swiss people living there.

For decades, experts wondered why the relatively low-lying area, home to a couple of hills and a creek, was named after a country that’s renowned for its majestic green mountains and snow-capped rocky peaks that are thousands of meters high.

“It turns out that it has nothing to do with the landscape, but rather the hundreds of little Swiss people who live there in peaceful obscurity,” said hiker Gabrielle Maapen, who was the first to see the little figures performing what she described as “a procession led a man in a garland of miniature flowers riding a grasshopper.”

Within an hour of the discovery, representatives from the national statistics institute STATEC arrived in order to question the diminutive residents about their income, household composition, and if their diets contained adequate amounts of meat. While their numbers are statistically inconsequential, says one STATEC official, they are likely to bring down the country’s average height by a half of a centimeter or so.

Linguist Serge Gerber, who was flown in from Bern to communicate with the little Swiss, says he’s already learned a great deal about their history.

“Apparently they emigrated hundreds of years ago, because the heavy snowflakes that fall during Swiss winters were literally too big and dangerous for these little guys,” he said. “So they moved to this part of Luxembourg where they live in cute, tiny chalets, make cheese from ant milk, and yes, they do engage in some yodelling when they feel inspired.”

According to Gerber, it seems as though normal-sized locals from nearby villages used to check on the tiny neighbors and bring them morsels of bread and matchsticks to build houses.

“But because the tiny people are nearly invisible to the naked eye, and because they’re Swiss and are therefore naturally quiet, everyone just forgot about them,” he said.