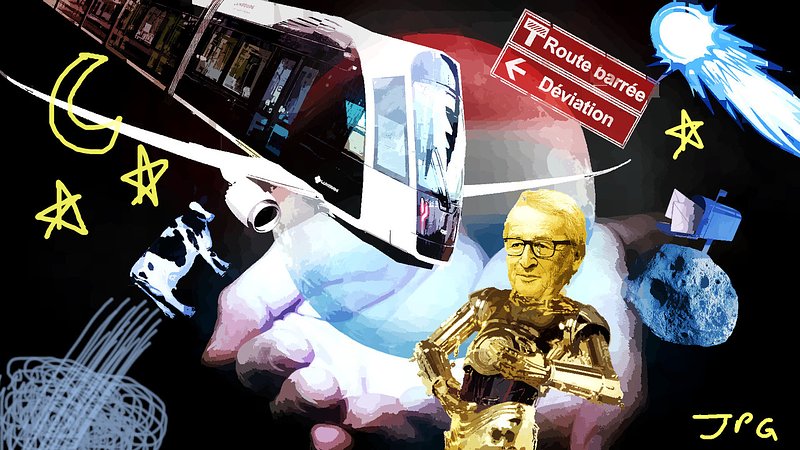 Using a crystal ball won at the Schueberfouer in 2011, we gazed into the future. Here’s some of what’s in store for Luxembourg in the 2020s.

2020: Free public transport becomes a reality in Luxembourg, but it will go unnoticed by thousands of residents who weren’t aware you were supposed to pay in the first place.

2021: Someone will move here and get annoyed by X, so they’ll create a petition to ban X. Long-term residents will suddenly get very defensive of X, although they’re also annoyed by it. X will eventually be outlawed even as old-timers now consider it a sacred tradition. A society will be created for the preservation of X.

2023: Jean-Claude Juncker will emerge from retirement to begin a new political career. Despite scepticism and concerns about his health, he’ll again dominate national politics until it’s discovered in 2029 that he’s a cyborg and that the real Juncker retired to a Belgian monastery in 2007.

2024: Following pressure from foreign-born residents, seven new languages will be added to the list of official languages. These include Mandarin, Bengali, the fictional Valyrian, and body language. Civil servants briefly consider protesting but will begrudgingly consent after they’re offered a language bonus.

2026: Embarrassed by having sunk another €100 million in unsuccessful asteroid-mining ventures, leaders will announce that the real plan the whole time was to explore using celestial bodies as sites for affordable housing, which sounds crazy at first considering the inconvenience of taking a rocket to and from work every day, but will end up being a viable option for many people who can’t afford a home here.

2027: Despite the tram, free public transport, and dozens of new park-and-ride garages on the periphery of the capital, traffic will continue to worsen, prompting frustrated leaders to give up and rebrand Luxembourg as a global destination for people who love being stuck in their cars. An advertising company will be paid big money to create the new slogan: “Luxembourg: come for a day, stay for a week.”

2029: The roadworks that have been paralysing much of Luxembourg City since the late 2010s finally come to an end. Following initial relief, residents are overcome by sadness when they realise they had more frequent and meaningful contact with the workers than with any of their friends and relatives.