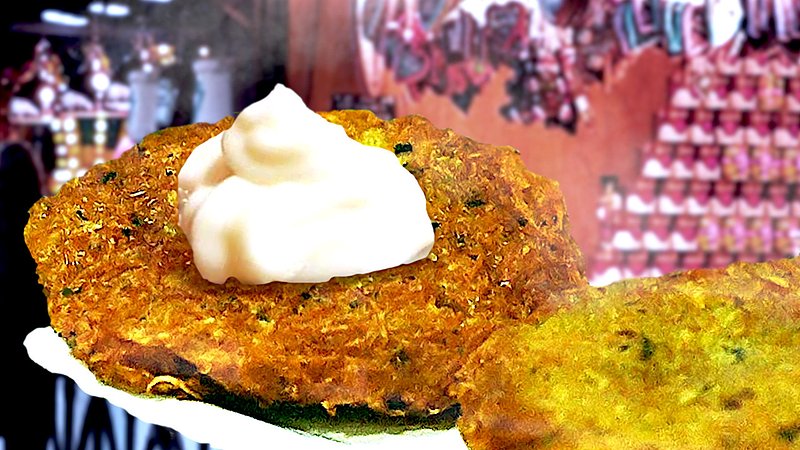 A man’s attempt to eat potatoes in a manner he felt was natural led to chaos and confusion when he topped his hot Gromperekichelchen with cheap mayonnaise.

Jean-Luc Gouy, a resident of Martelange, was having lunch with colleagues at the Christmas Market in the city center when he ordered three of the traditional deep-fried potato cakes.

After Gouy received the items, he casually walked over to a nearby sausage stand and pumped a generous amount of the white condiment onto his Gromperekichelchen.

The boss of the sausage stand shouted at Gouy, more out of a desire to stop him from committing a breach of local custom than to scold him for stealing the mayonaise.

Still, Gouy didn’t relent and instead continued pumping more mayonnaise, causing several middle-aged Luxembourgers standing nearby to panic and use curse words that haven’t been heard in 20 years.

An argument broke out, with dozens of people accusing the Belgian of gastronomic sacrilege. Now in a defensive posture to protect his gooey mass of food, Gouy claimed that mayonnaise goes with fried potatoes just as beer goes with mussels.

The matter was only settled when an elder Luxembourger arrived wearing a beige cloak. Raising his cane in the air, the elder declared that since the dawn of time, applesauce has been the only suitable topping for Gromperekichelchen and that putting anything else on top could bring plague upon the land.

This is the second time this year that a breach of tradition has led to a scuffle. Just last week, a tourist nearly sparked a riot when she complained that her Glühwein was too hot and asked for ice cubes to put in it.