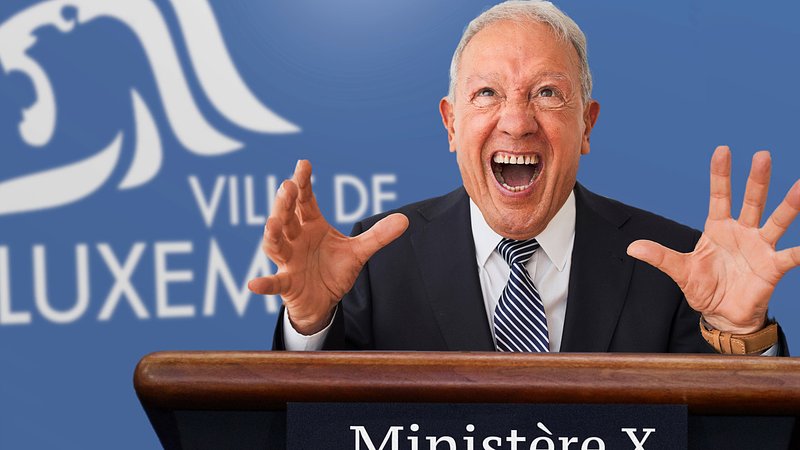 At a press conference on Wednesday to address the traffic crisis, the official who oversees transportation and roadworks in the city suddenly grew annoyed with criticism and, in a moment of madness, ordered the remaining 12 open streets to be closed.

The official, going by the alias “Minister X,” at first attempted to explain why most of the capital seems to be undergoing construction, suggesting that whoever ordered the tram is to blame. But then his voice took on a lower register and he smiled.

“Oh yes, we tried to please you,” he said, his sweaty hands gripping the podium. “We could have blocked the whole city off, repaved every road at the same time, but no, we played nice, and we left a whole dozen streets for you to use.”

“A dozen streets!” he shouted as the assembled journalists cowered.

He then listed the 12 streets -- randomly scattered throughout the city, say observers -- which are untouched by roadworks and allow passage from Cloche d’Or to Kirchberg in just under two hours.

“And yet you don’t appreciate our thoughtfulness,” he said. “Twelve perfectly good roads are not enough, you say. You want more, because your appetite for a swift commute home is insatiable.”

He then picked up an emergency phone and punched in a code that one source identified as a command to execute order 66, which means that any remaining unobstructed roads will be barricaded.

“Close them all,” he said, his words punctuated by maniacal laughter. “Oh yes, close them all.”