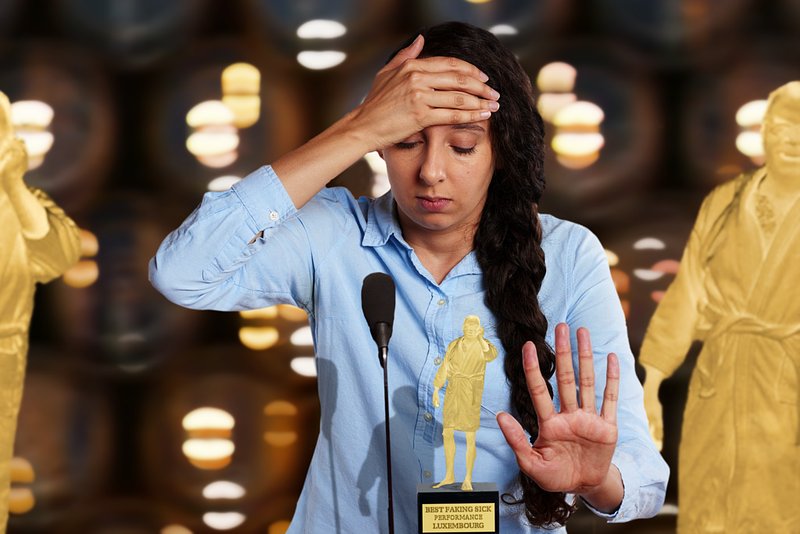 LUXEMBOURG-VILLE -- A steel company employee known to fake illness at least twice a month has been recognized for her tremendous achievements in acting.

At its annual awards ceremony on Friday, the Luxembourg Work Actors’ Guild awarded Aurélie Bardol the Best Acting Sick prize, a golden statuette of a man calling in sick while simultaneously planning a full day of fun activities at home.

The 34-year-old pricing analyst is said to have called in sick no fewer than 100 times since she was hired three years ago. Although this was the first time she was nominated for an award, she earned critical praise for a 2015 performance that coincided with the end of her probationary period: a sudden and mysterious backache resulting in a whole month off.

“Oh my, this is such an honor,” Bardol said to standing ovation from Luxembourg’s most prominent fellow fakers. “I would like to thank my boss, Christophe, who only challenged me that one time when I called in sick on that Friday before Christmas when the auditor was there, and Anne-Sophie, from HR, who told Christophe he must never do so much as roll his eyes at me again.”

“And of course I want to thank my wonderful colleagues who quietly do my work in my absence and say nothing even when I come back from two weeks of sick leave smelling like mojitos and with a dark tan and a new coffee mug that says ‘I heart Cuba.’”

Nominated for the award were four others, including bank employee Eduardo “Eddie” Fuentes who was expected to win. The 43-year-old stopped going to work six years ago after a rumored burnout yet occasionally shows up at the office for a few days before disappearing again.

“I”m just so excited to get this award that I’d better sit down,” Bardol said. “It must be that sushi I ate last night, or was it chicken? Anyway, I might have food poisoning. I really don’t feel well.”

“I know that next week is busy for our entire department, and yes, I still have the September report to finish, so I will make every effort to show up on Monday,” she continued. “But let’s see what the doctor says.”

“The last thing I want is to infect everyone with whatever I’ve got” she added.

Sources close to Bardol predict that on Monday she will be feeling so poorly that she won’t even be able to make a telephone call or send a proper email, but only text her boss a curt message full of misspellings such as “feelin trebbilble back in december if doc sayz ok.”