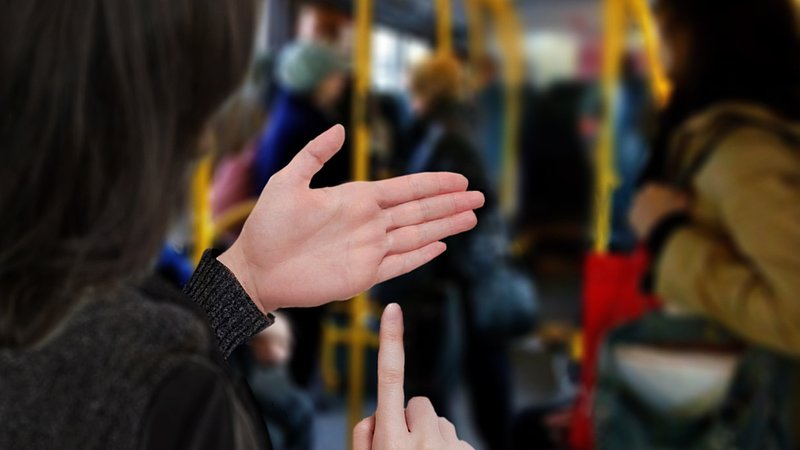 Dozens of people on a bus headed to Kirchberg on Wednesday were confronted with a disturbing sight when a passenger who didn’t have a smartphone was left with no choice but to swipe at the air.

The young woman, who according to sources works as an administrative assistant and had accidentally left her cherished iPhone 7 at home, carried on playing with her phantom device for several minutes until a concerned passenger came to the rescue.

“I could see that she was trying to send a text message, and then she scrolled down an imaginary social media news feed,” said 48-year-old insurance agent Pascal Elvinger. “What really broke my heart is when she used her invisible iPhone to take a selfie and share it with her friends.”

Without the young woman noticing, Elvinger slid his Galaxy S8 into her hands. With a real screen now warmly illuminating her face, several passengers applauded and one elderly woman began to cry.

When Elvinger arrived at his stop near Auchan and reclaimed his device, another passenger took pity on the young woman and inserted in her palm a deck of cards — which, even hours later, she was observed trying to charge with a power adapter she keeps at work.

Experts say that air-swiping — along with frequent lip-puckering and uncontrollable thumb-twitching — are the body’s ways of avoiding psychological trauma caused by smartphone withdrawal.

In 2015, a student from Walferdange famously swiped at the air for a whole month until he realized that he had lost his iPhone four weeks prior when it slipped out of his hands while he was Snapchatting and riding a bicycle over a bridge.