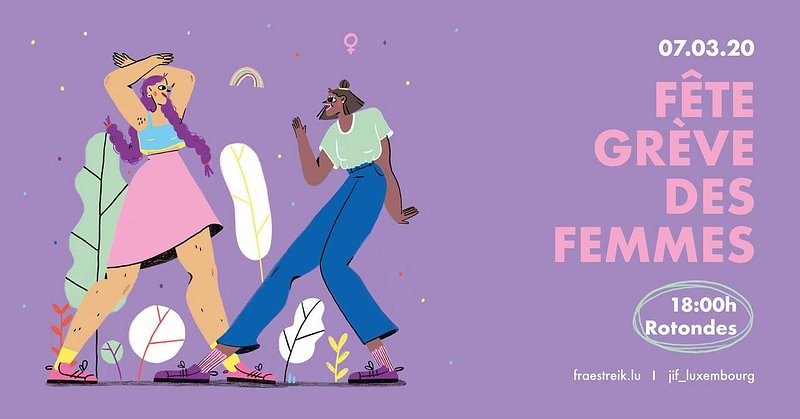 Here are your editor's picks for Friday, Saturday and Sunday.

Please also note the list of events no longer taking place due to COVID-19 concerns - list can be found here.

What: Celebrating International Women's Day
Where: Rotondes, Place des Rotondes, 2448 Bonnevoie
When: Saturday, 7 March between 6pm-1am
Info: the strike ends at Rotondes around 5.30pm with plenty of entertainment

Men and women around the world are celebrating and acknowledging International Women's Day with a Women's Strike here at home in Luxembourg on Saturday. As the days falls on a weekend, the strike is more of a symbolic act of coming together, but that still allows for a fun evening with live music and DJ sets outside of Rotondes. Everyone is welcome to join and celebrate les femmes!

When Tony Allen, the king of Afro-Beat, meets up with Techno pioneer Jeff Mills, a legendary evening awaits the audience. Allen began his exceptional career almost sixty years ago, playing alongside the great Fela Kuti. With his colleague Mills, who hails from the Techno metropolis of Detroit, he shares unquenchable artistic curiosity, as borne out by innumerable collaborative productions. What could be more welcome to the ear than two icons of 20th-century music, both deeply rooted in groove, meeting on stage to develop real 21st-century music, far from all glamour?

What: Movies and documentaries from Luxembourg and around the world
Where: Different locations, an overview here.
When: Friday, 6 March - Sunday, 8 March, times vary.
Editor's Tip: spend the weekend hopping to different locations, but make a little plan for yourself in advance.

The Luxembourg City Film Festival is in full swing as of Thursday this week, showcasing exceptional work from around the world and even Luxembourg-based productions. No matter whether young or old: there's something for everyone. Screenings, talks, events and workshops take place throughout town in different locations, so best is to have a look at the website linked above. Kids: this is the day that mummy and daddy are not allowed to complain about too much screen time! Make sure to get your Festival Pass to see an unlimited amount of films without any additional costs over the course of the next days.

Autojumble is THE Luxembourgish exhibition for old vehicles. Taking place at the LuxExpo, enthusiasts, sellers and owners come together to chat all things oldtimers. Special guest at this year's edition is Paddy Hopkirk MBE, a successful former rally driver. On Sunday, a Renault R4F4 will be auctioned off for SOS Children's Village Mersch.

See where this week's events are located:

What: Afghan folk songs
Where: Neimënster, 28 Rue Münster
When: Sunday, 8 March at 11am
Tickets & Info: free entry, more info here.
In Songs of our Mothers, traditional and other Afghan folk songs are taken on a journey from East to West, mirroring Soroor's journey. Discriminated for her gender, singing and ethnic background, she settled in London as a refugee and started musical collaborations with artists, such as RESET 2019 trumpeter Yazz Ahmed. A powerful album for "those women around the world whose image has been erased, and whose voice has been forbidden." An inspiring gig on the weekend of International Women's Day celebrations.

Differdange's music school hosts the yearly "Drummer Days", a free festival open to all. The school invites a professional, international jury to check out local drum performances, judge them and award a prize of €5,000 to the lucky winner. Come out and support the country's next generation of fine drummers and percussionists, or bring along your kids if you think this festival may inspire them to get started themselves!