In the previous part of our delightful chat with Freya Ridings we discussed the importance of a connection with fans. That building of a fanbase is paramount in ensuring longevity.

It is about more than simply adding numbers to a database though, argues the up and coming artist; “I loved those early days of being able to interact with people, I mean you see the same faces. They become, like…friends. Every city you go to, they help it feel familiar. It’s nice.”

Doesn’t that get scary, though? Was Freya prepared for the super-fan? Have people gotten a little too close for comfort, or gotten grabby? “(laughs) I’ve been ssoooo lucky. People talk about crazy fans and I think my music just doesn’t lean towards that. I’ve found my fans to be the most lovely and respectable people…”

Tick one for the ‘keeping the scary fans happy’ chart. “They may want to give you gifts, or something. I mean there’s a guy who’s a super, SUPER fan and he is the ultimate fan to many female singer-songwriters, and that could be off putting but I adore him to bits. You can see him in the front row of pretty all of the gigs I have ever done, and he has a tattoo of my eye on his arm.”

“NO! (laughs) he’s an absolute sweetheart – I’ve met him so many times now, he even knows my family.” Far from needing Kevin Costner to take a bullet for her, Freya is determined that people are essentially good. And, if not, well… “My drummer is a big dude, he does a lot of private security. My whole band are massive. I’m not scare of anyone, anyway, but it is good, in general, to be on the cautious side. You want to let people into your lives, be trusting and respectful. It goes both ways.”

Being a human as well as ‘performer’ is a tricky balancing act, and one that Freya readily acknowledges; “I try and put everything I possibly can into the show and make it more authentic and honest with time I perform. I need to react to feedback and the crowd WILL tell you what they NEED, and I AM open to that but it’s equally important after the shows to rest and take your quiet time seriously. You know, so that you can perform to your absolute best.” 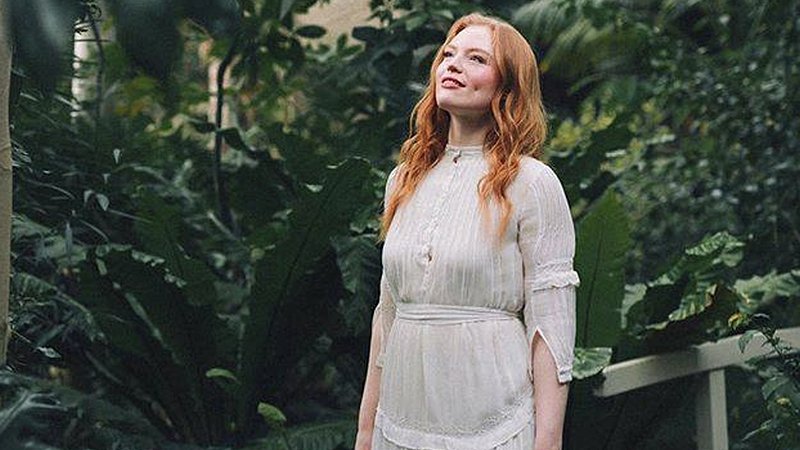 Venues, then, must also play their part in scene-setting; “There have been so many venues in which I had only dreamt of playing that, now, I have actually played. One of the best feelings, I have found, is when you have supported someone in a venue, and you come back a year later and YOU’RE the headliner. THAT’S the most insane feeling. There is such a huge number of people who perform that might not ever get the chance, so you are very aware of that.”

It’s this sense of overcoming the odds that lies at the heart of Freya Ridings’… well, heart. Not one to toot her own trumpet unnecessarily, there is a sense that this once starry-eyed singer in her own bedroom is now coming to terms with just how much expectation there is being heaped on her shoulders. Heading back on the road with a full band, with production behind, the lights, the dazzle, it’s not going to blind her. Quite the opposite. Riding’s focus is lasered in.

“Playing at the Royal Albert Hall with Tears for Fears was a standout, but there is something to be said about doing it with your own band. There’s also Shepard’s Bush Empire, a venue I used to go to with my Dad. You know, as a London Girl, that was very special. The Apollo was great achievement. Last year, I supported Ray LaMontagne and then I came back and saw my family in the empty venue before the show. And it took me back to the early open mic days when they were the only people there. It was really emotional.”

Ridings described her debut album as being a “a journey of vulnerability and isolation”, what will the themes be for album number two? “All I am doing at the moment, sitting at the piano, is literally thinking about what comes next. Tuning into my subconscious and figuring out where I am in my life. It is an interesting point, because people are assuming that I am going to be too happy to write sad songs.”

Is there any truth to that? Years of struggle and now HUGE success, there must be at least the merest hint of a smile… “Well, yeah, it may not be quite as melancholic as the first, I am aiming for that fiery energy, that euphoric feeling of overcoming that pain. The last couple of years have been so much of a whirlwind and have been so spellbinding, you do miss your family, you don’t see as much of your friends as you like… (trails off) …” It appears that the melancholy may be nearby after all. “For me the isolation is still very much there, but it’s not to the same extent…I have so much to be grateful for that I want to write something that captures that.”

From Ridings’ self-titled debut, the cuts Unconditional and Ultraviolet appear to ripe for fans to cover and load to the ‘Socials’, as someone not adverse to the odd cover here and there, is this something she can get behind? “Oh, absolutely. Oh my god, yes! I love it. Especially as it is so kind that people take time out of their day to learn songs that I have written but also when they choose songs that don’t get covered that much. If I see a cover of Elephant or Unconditional…I watch them all, when I can. It makes them more unique, in a way.”

It seems churlish to go from that line of questioning to ‘What do you know of Luxembourg’ but I feel that we need the breather… “Oh, I’ve never actually been…I can’t wait to come to Luxembourg…how long have you lived there?” My how the tables have turned… “I sued to love studying country’s flags, I was quite the Geography geek growing up, so I enjoy getting to play a country I’ve never been to before is such a lovely feeling – especially so when people are welcoming. I’m really excited to kick off the tour in Luxembourg. I can’t wait.”

We discuss den Atelier’s lauded hall, the benefit of a corner stage. Walking around the city’s numerous roadworks, winding down the interview, when my eldest son, who’s decided to take a shower, starts belting out Castles. Properly…singing like no one is listening. It’s not rehearsed. I wish it were. Anyway, the logical question is that which follows and no malintent was…well, you know: “Literally, Lizzo. Although my brother keeps singing Paolo Nutini’s Iron Sky (great track) incredibly loud and now I have started too. I’ve never sung in the shower in my life, but if I were, it would probably be Lizzo.”

Having established that my eldest is a fan (and possible future stalker) my youngest remains unconvinced, preferring Imagine Dragons (interrupting) “Oh, I’m totally onboard with that. One of my favourite songs of all time is Radioactive. I would love to record a track with them.”

The bulk of this year is set for finishing promotion for the current LP and writing record the follow-up. Ridings is excited about the European leg of the tour and heading to Australia and New Zealand for the first time.

Given the amount of airplay devoted to both Castles and the (for a while, at least it made over a million sales in the UK alone and a staggering 200 million streams on Spotify) ubiquitous Lost, how does our future star react to hearing her tracks when out and about? Mega cringe, or totally boss? “It’s the coolest thing…EVER. Honestly. Me and my brother were coming back from a boxing class (you can see why she’s not scared of fans now), and a car drove by playing Castles. The car stopped right next to us and we literally threw down a dance party there and then in the road. Just the two of us. You never know how long a thing like that is going to last. It’s not a given that it is ever going to happen and so for a song that was for so long in my head to be coming out of someone’s car is a truly wonderful thing.”

The cherry on the cake: we've got some tickets to give away. To enter the competition, head to our Facebook page and follow the instructions. Good luck!