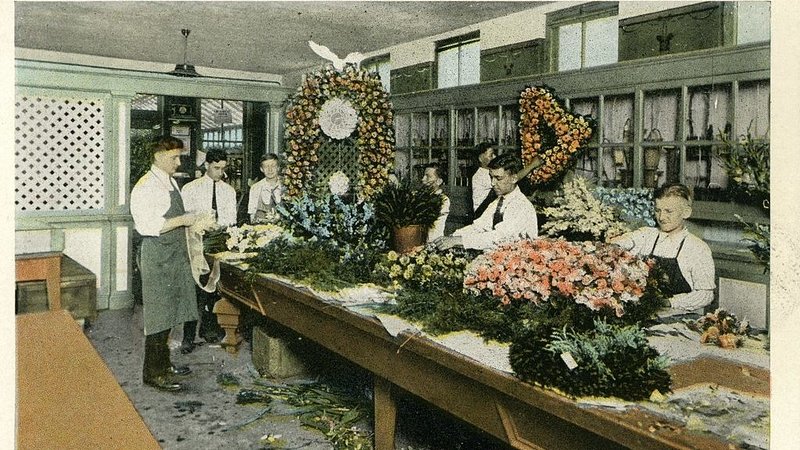 Orphaned boys working in the floral shop at Angel Guardian Orphanage in Chicago, Illinois. / © From the Kevin Wester collection

As we continue our series exploring Luxembourg's history through immigration, we have an exciting collaboration with Kevin Wester, former executive director of the Luxemburg American Cultural Society. In this mini series, Kevin explores the history of Luxembourgish immigrants in Chicago, heritage sites, and notable Luxembourgers.

An estimated 72,000 Luxembourgers emigrated from Luxembourg in the second half of the 19th century and early decades of the 20th century.Most of these Luxembourgers chose America as their new home in hope of building a better life for themselves and their families. Luxembourgers settled heavily in the states of Ohio, Illinois, Wisconsin, Minnesota, Iowa, Nebraska, Kansas and Oklahoma. While many were farmers, and thus chose rural areas to settle, the largest single group of Luxembourg immigrants settled in Chicago, Illinois.

The first documented group of Luxembourg immigrants to settle in Chicago were three families who traveled on the ship Silvanus Jenkins. This ship also carried the first Luxembourg settlers to Wisconsin.  The ship departed Antwerp, Belgium, on May 25, 1845 and arrived at New York City on July 4, 1845. The first three Luxembourg families to settle in Chicago were Nicholas Faber of Bauschleiden and Wilhelm Sinner and Pierre Pleschette of Grosbous. Shortly thereafter, they were joined by Nicholas Kransz of Buschrodt. 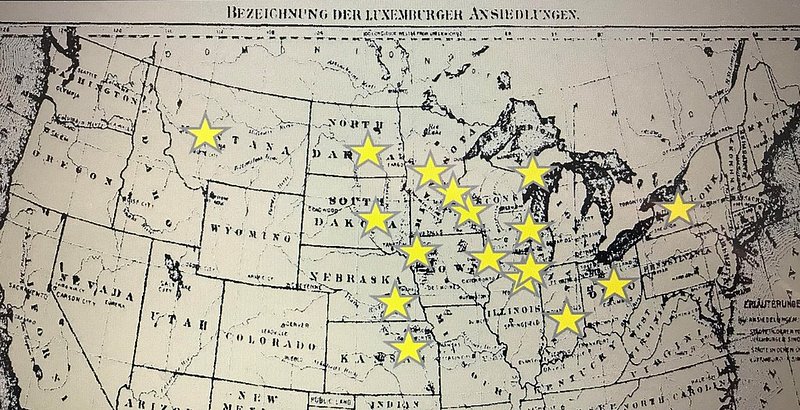 Major areas of Luxembourgish settlement in the USA. / © From the Kevin Wester collection

These early settlers purchased land in a rural area north of the city of Chicago. This area is now classified as the Edgewater neighborhood of Chicago. Many other Luxembourgers followed after them in ensuing decades. By 1880, an estimated 700 Luxembourg families resided in metro-Chicago. By 1906, an estimated 2,500 families resided there which would total about 16,500 first-and-second-generation Luxembourgers.

While Luxembourgish immigrants to Chicago worked in a variety of occupations, from saloon keeper to jeweler, Luxembourgers were most famous for being the so-called “glass house” people of Chicago. After originally growing crops outdoors, Luxembourgish immigrants soon realized that it would be much more profitable in a winter climate to grow their vegetables under glass in greenhouses. Over a period of a few decades, Luxembourger greenhouses and truck farms overtook Chicago’s northside neighborhoods and suburbs of Edgewater, Rogers Park, Rosehill, West Ridge, Rogers Park, Evanston and Niles Center (now Skokie).  Luxembourgish greenhouse owners would sell their vegetables at the market on South Market Street which fed the masses in rapidly-growing Chicago

The growth of the Luxembourger greenhouse industry led to the development of other businesses needed to support the greenhouses such as boiler manufacturing, seed sales and greenhouse construction. Originally, Luxembourgers grew vegetables under glass but eventually flowers became the plant of choice, especially roses and carnations. The remnants of the Luxembourg greenhouse tradition in Chicago continues today in current greenhouses and florists owned and operated by these Luxembourg-descent families:  Pesche, Kinsch, Kalmes, Leider and Urhausen.

Probably Chicago’s most famous greenhouse owner was Peter Reinberg, who was known as Chicago’s “Rose King.” Peter’s parents were Henry and Katherine Reinberg of Pratz, Luxembourg. They had emigrated to the Edgewater neighborhood of Chicago in 1848. Peter, born in 1858, excelled in growing roses and carnations. Eventually his greenhouses totaled 1,200,000 square feet (110,000 square meters) of glass and he became not only the largest grower of roses in the world, but he quickly became a millionaire. Peter served as President of the Cook County Board of Commissioners, President of the Chicago Board of Education but also first President of the Cook County Forest Preserve Commission. He acquired the first 18,000 acres of forest around Chicago and is rightfully consider the “father” of Chicago’s famous Forest Preserve system.

Luxembourgish immigrants contributed to the founding of a number of institutions in Chicago. Most often in collaboration with German immigrants, Luxembourgers helped establish numerous Catholic parishes primarily on the northside of the city.

The two “mother” parishes for Luxembourg immigrants were St. Michael’s Parish, just north of downtown Chicago, and St. Henry’s Parish, located in the midst of the greenhouse neighborhoods further north.  In addition to parishes, Luxembourg immigrants helped found the German Catholic St. Boniface Cemetery in Chicago and shortly thereafter, the Angel Guardian Orphanage for the growing number of Germanic orphans in Chicago. 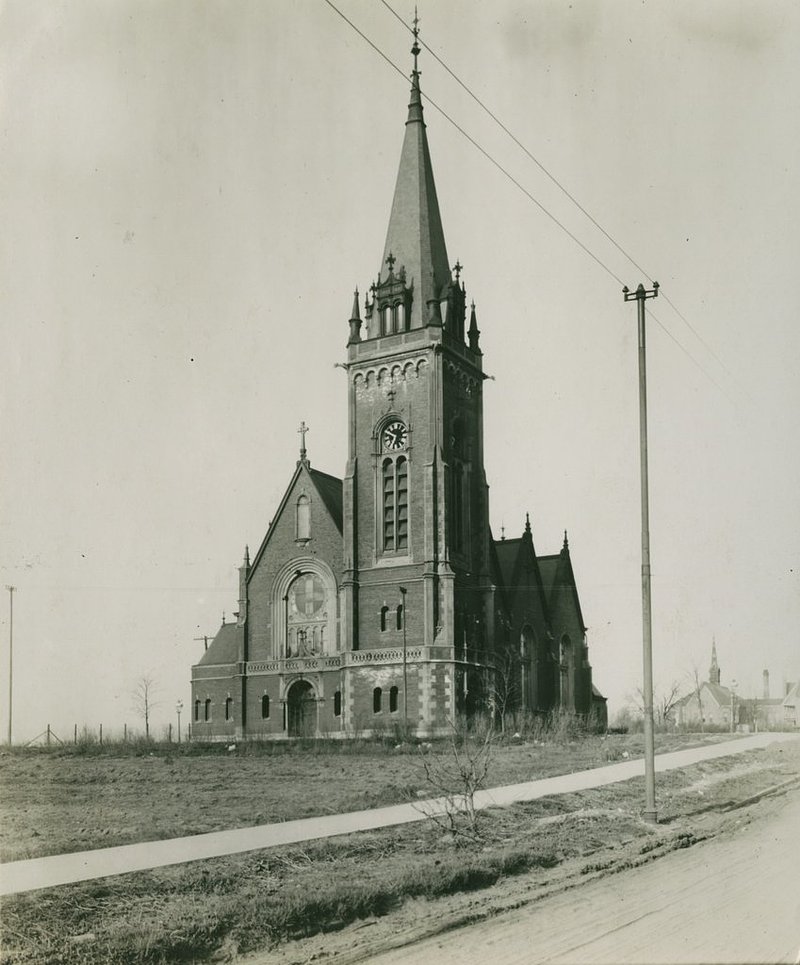 St. Henry Church - often called the Cathedral of the Luxembourgers in Chicago. / © From the Kevin Wester collection

The orphanage featured greenhouses and a floral shop in an attempt to provide orphans with a trade. The greenhouses were often managed by Luxembourgers.

Luxembourgers, like many other ethnic groups in the melting pot of America, quickly formed societies to celebrate their unique ethnicity and to protect and associate with their fellow countrymen. Following the famous Chicago fire in 1871, the Luxembourgers associated with St. Michael’s Parish formed the first Luxembourg society – Luxemburger Unterstuetzungs Verien (Luxembourg Mutual Aid Society). This society paid sick and death benefits to its members. In 1886, the Luxemburger Independent Club was formed as a political voice in reaction to the infamous Haymarket Bombings in Chicago.

But the largest and most enduring of all Chicago’s Luxembourg societies was the Luxemburger Bruderbund (Luxembourg Brotherhood of America) formed on the southside of Chicago in 1887. The LBA grew quickly and by 1896, the society formed various LBA “sections” in Illinois, Iowa, Wisconsin and Pennsylvania. At its height, the LBA had over 1,500 members. The Luxembourg Brotherhood of America is the only Chicago-based Luxembourg society in existence today and it now welcomes female members.

With the ever-shifting demographics in Chicago’s neighborhoods because of the arrival of “new” immigrants, Luxembourgish Americans, for the most part, no longer live in the traditional neighborhoods of Edgewater, Rosehill, Roger Park and Evanston.

Rather, over the years, the descendants of Luxembourg immigrants to Chicago sold their farmland, greenhouses, saloons and shops and gave in to “urban sprawl” in the United States. Many moved to far northern and western suburbs of Chicago where they reside today. It is no secret that Luxembourg immigrants to Chicago were a prolific people. Families were very large for the next three generations.  Thus, metro-Chicago continues to enjoy the distinction as home to the largest population of Luxembourg Americans in the United States.

Kevin Wester resides in Milwaukee, Wisconsin, USA and is the former Executive Director of the Luxembourg American Cultural Society. He now operates Luxembourg Adventures tour company and assists individuals in reclaiming Luxembourg nationality. He is an avid genealogist and researcher of Luxembourg and Luxembourg American topics. You can contact Kevin by email.