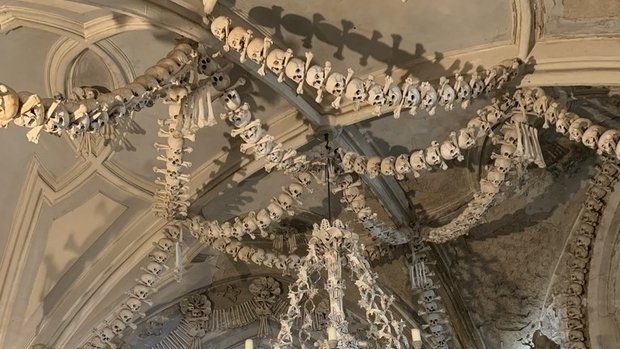 Kutná Hora, or Kuttenberg in German, is a city in the Czech Republic that is a World UNESCO heritage site.

The Sedlec Ossuary stands out as a particularly well-known chapel in which thousands of bone adorned skulls hang.

At an 85km distance from Prague - which translates into roughly an hour an a half's journey by train - makes the site a very popular tourist destination for both nationals and globetrotters. Consider this in conjunction with a food festival (such as last weekend), and you can barely set foot in the place.

Kutná Hora's history dates back to the 12th century, but bring together people from all over the world who are there to see the city and try the local food - and moreover, beer - then local musicians adjust to the medieval atmosphere accordingly.

Kutná Hora has a population of around 20,000 inhabitants that live primarily off of the tourist industry and the local tobacco industry.

The famous Sedlec Ossuary is located half-an-hour's walk outside of the old town. What looks like an unassuming church from the outside houses up to 60,000 human skeletons dated back to the plague and the Hussite Wars, that is, around the 14th and 15th centuries.

It was in the 16th century then, that a half-blind priest began to use these skeletons to decorate the church. The end result is quite literally the product of bone and marrow.

Whoever wishes to visit the ossuary and the gothic cathedral can do so for 120 Czech Korunas, which is equal to less than €5 - definitely worth a day trip!

Skull and bones behind the borders

Other ossuaries and cemeteries can be found within the Greater Region, not too far across the border, such as the one in Marville between Longuyon and Montmédy.
(Article and photos stemming from 2009.)