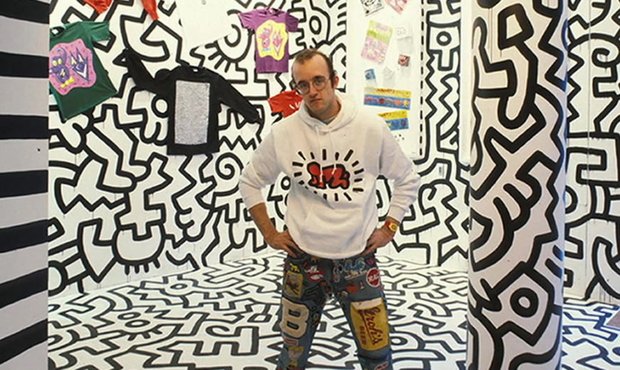 Haring belongs to the group of the most commercialised artists of the 20th century, being best known for pop art.

The artist left his legacy in the form of minimalistic figures, but their significance is far greater than one would think. Haring worked for a relatively short period of ten years and sought inspiration from his surroundings in New York. His works thus reflected contemporary events and news.

As an individual, Haring was active in fighting racism, homophobia, environmental pollution, and much more. Above all, his work depicted societal issues.

With his technique of simple strokes and his fast turnaround time, Haring produced a lot of art in those ten years in the 80s. He would always paint based on whatever was in his head and did not tend to use sketches with larger projects either.

Haring believed that art was for everyone. He began putting this belief into reality with his "Subway Drawings" in 1980. He would cover adverts on the New York metro with his own paintings, which immediately rendered his art accessible to the people of New York.

Six years later, Haring opened Pop Shop, where he sold his art work on t-shirts and other accessories. In this venture, he was inspired by fellow pop artist Andy Warhol and gave ordinary people the option to purchase his art.

The Zidoun-Bossuyt gallery in the Grund is exhibition the artist's work in Luxembourg. All the works seen in the exhibition come from private collections based in France, Belgium, and Luxembourg. Two of those pieces are especially significant, as this marks the first time that they will be presented to the public.

The exhibition will last until 9 March.