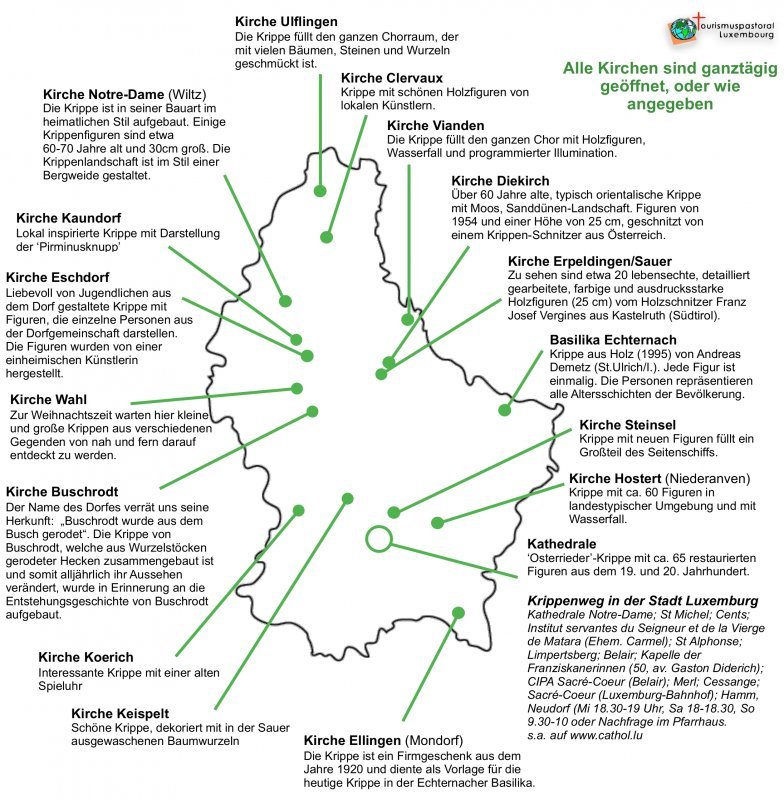 More than 30 nativity scenes can be admired all over Luxembourg and are guaranteed to put you in the holiday spirit.

Right on time for the festive season, Luxembourg's Catholic Church has organised a nativity trail through Luxembourg City and more rural terrain.

You can explore an impressive total of 30 nativity scenes until 6 January. Most churches are open the entire day.


Nativity scenes all over the Grand Duchy

Buschrodt church
Buschrodt's innovative nativity scene is made entirely of rootstocks  and hedges. The choice of material is symbolic and reminds the viewer of the village's genesis: the Luxembourgish word "Busch" means bush and "roden" means uprooting. The village itself saw the life of day when a part of the forest was cut down.

Diekirch church
60-year-old oriental nativity scene with moss and sand dunes. The figures were made out of wood in 1954, by an Austrian carver of nativity figurines.

Echternach basilica
Wooden nativity scene made by Andreas Demetz. Each figurine is unique and represents a different age group.

Erpeldange church
This nativity scene boats 20 lifelike and colourful figurines. Wood carver Franz Josef Vergines is the artist behind them.

Eschdorf church
Teenagers from Eschdorf lovingly designed this unique nativity scene. The different figurines represent individual people from the village community. They were made by a local artist.

Cathedral
Around 65 figurines from the 19th and 20th century were restored and now make this nativity scene a feast for the eyes. For more information about the nativity trail in Luxembourg City look below.

Troisvierges church
This nativity scene fills the entire choir room, which has been tastefully decorated with trees, stones and roots.

Wahl church
Right on time for the festive season, big and small nativity scenes are waiting to be explored.

Vianden church
Vianden's nativity scene fills the entire choir room of the church. It is has wooden figurines and a waterfall.

Some of the figurines are 60-70 years old and measure up to 30cm. The nativity scene resembles a mountain pasture.

PDF: The nativity trail in Luxembourg City (German and French) 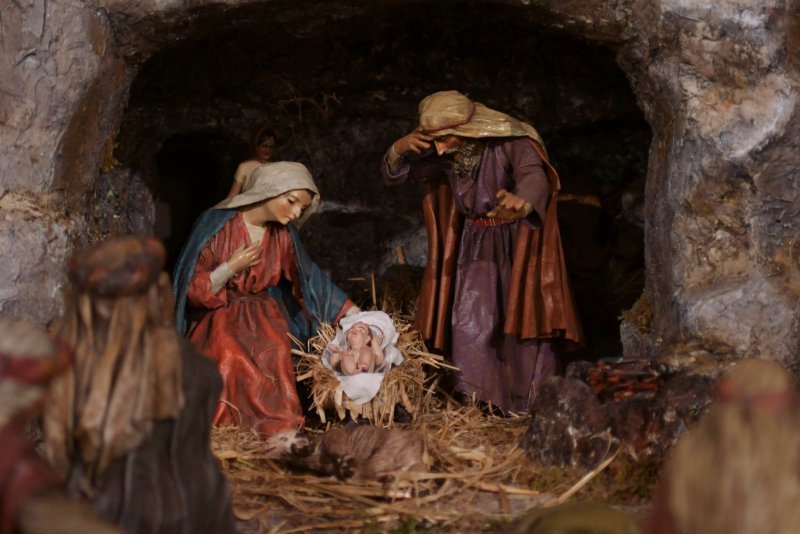 Franciscan chapel (ring door bell at main entrance)
Large figurines in front of the altar and a landscape with shepherds and sheep are the highlights of this nativity scene.

Merl (9am-7pm)
Very large nativity scene with wooden figurines from Kevelaer (80s) have been placed in a large stable. In the background, a painting depicts Bethlehem. A waterfall and beautiful illumination make this a nativity scene that is not to be missed.

Cessange (11am-5pm)
Traditional wooden figurines have been placed in front of the altar.