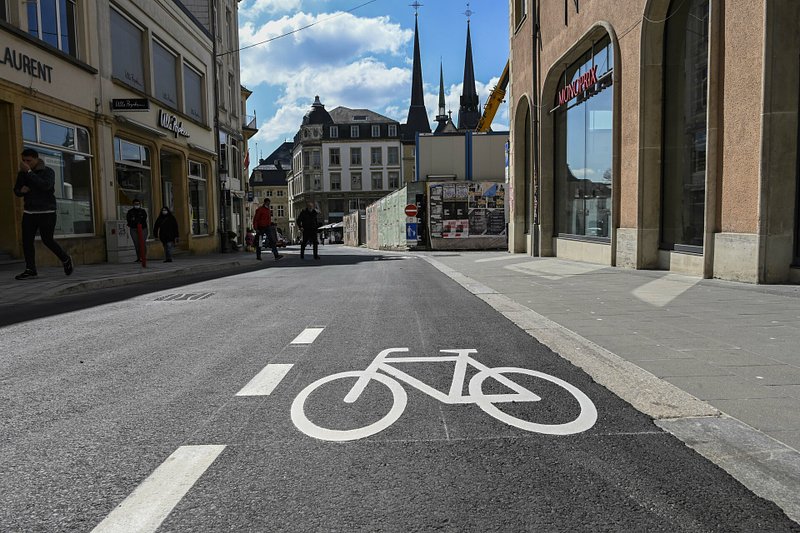 As I am enjoying a fab view across a lake from my beloved holiday rental in the north of the Netherlands, I see schoolchildren returning home on their bikes. A 20 km bike ride to school is perfectly normal here. It’s one of the few things I miss in Luxembourg. I am not talking about a touristic bike trail; I am aware we have plenty of those. I am talking about cycling through the city and surrounding areas as a means of daily transport. Safe transport. Because, let’s face it, you can’t let your kids cycle to school safely, unless you live in the neighborhood of your kid’s school, on the same side of the road as the school and do not encounter any other traffic on the way to school. It’s a shame because I would love to ditch the car and hop on my bike instead, but not under the current circumstances.

When we had just moved to Luxembourg, I once tried to bring the children to the creche on my old city bike. Our one-year-old in a baby seat on the steering wheel, our three-years-old in the kid’s seat on the back of my bike. It was such a sight, that it actually stopped traffic. I think no-one in Luxembourg had ever seen a mother with two children on a bike before. Some people looked at me with appreciation for choosing the ‘outdoorsy’ way of getting my kids to the creche but quite a few others stared at me angrily, and shouted that I was insane as it was dangerous for the children.

Although the route to the creche was a fairly safe one - I had checked that in advance and part of the route actually had a bike path next to the road, on a general note I did agree that cycling was a dangerous undertaking. Not just because bus drivers think they are gods, or because car drivers don’t pay attention to anything that happens outside of their car, but because of Luxembourg’s haphazard placements of bicycle paths.

First of all, there hardly are cycle paths in the non-touristic sense of the word. Take a trip to any forest, and you’ll get all the ‘pistes cyclables’ you could wish for. However, cycle from Strassen to Luxembourg City Centre and you’re f…bleeped. Either you have to drive on the Route d’Arlon, taking on cars and buses to claim your space, or drive on the sidewalk which is not allowed. So you have to choose between risking your life and breaking the law.

If you have been lucky enough to reach the city center without needing an ambulance or getting a police ticket, you’ll be rewarded with… cycle lanes. Yay! Unfortunately, the celebration is short lived as these lanes can just as quickly disappear, go up in thin air, dissolve, if you will. I can’t even begin to count how often I would suddenly be stuck at the ‘spontaneous’ end of a cycle path and had to search if and where it would continue (which it usually didn’t). As if some drunken painter without any patience or persistence has randomly drawn a few short cycle lanes here and there. Just for fun.

In 2015, I had the chance to ask Xavier Bettel about this. He was the guest speaker at an event for a large group of Dutch people so I thought that asking about bicycle safety in a Dutch setting was spot on. And Bettel was indeed happy with the question, stressing the importance of cycling as a healthy and environmentally clean means of transportation. He claimed that it was high on the priority list of the government to build more cycling lanes and change traffic rules to make cycling safer. He seemed passionate about it getting people out of their cars and onto bicycles. It was my first encounter with Bettel and I was very impressed. His answer made me believe that change was gonna come.

Fast forward to the present and very little has changed. We may have Veloh’s in many parts of Luxembourg and a few extra cycle paths have been added. I even have the vague impression that there are a few more cyclists on the road when I drive my kids to school in the morning. But the question is whether that’s thanks to the government, or in spite of it. All I know is that the amount of cars has only strongly increased, that cycling as daily transportation is still in the infancy phase and that the mystery of the suddenly disappearing cycle lanes remain.