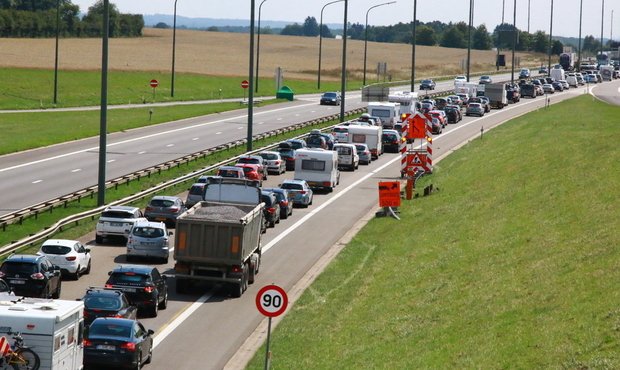 Anyone who has travelled on Luxembourg's roads during the morning or evening office hours will completely agree with me: what is the rush hour in most other places is the sloth hour in our country.

I have the privilege of enjoying this experience every morning on working days as I go to work, dropping my son off at ISL en route.

When we purchased our house in Mamer I was particularly attracted by the advertisment's mention of a 15-minute drive from city centre. I gave 50% weightage to this one convenience alone, which made the charm of all other available houses fade in comparison.

No, we didn't just take these words at face value - we made several test drives with a stopwatch to ensure that the claims held true, and even found that the drive could actually be done in just a short 13-minutes. But of course all of our test drives were done on weekends or during the slack hours in the afternoon or late evening. We had no idea what these innocent looking, dotted with trees, picturesque, winding roads would transform into during rush hour. The transformation is, for any bystander, no less dramatic than a scene from Transformers. Alas, it is sheer horror for commuters.

We start from our house 45 minutes early as opposed to the sweet 15-minutes in which we had hoped to cover the distance. The unending line of vehicles greets you with a wink as the cars drag along in a slow rhythm on that seemingly never-ending journey. It appears as if they have given up on the idea of getting anywhere, and the meandering journey has itself become the destination.

Even when you finally reach your exit and it is in clear view, there is no saying when you will actually be able to drive out of said exit. One hopes against hope and keeps staring at it, but no magic happens and it can take 5, 10, 15 or sometimes even more minutes to finally exit the highway. The thrill of driving out of these exits is on par with anything offered at the Schueberfouer.

Nevertheless, as connoisseurs of Lux roads are well aware, this is not the end of the adventure -  just the completion of level 1. As soon as one has left the highway, the cars that have been lumbering on the roads of the city challenge you to overcome the battle at level 2. The difficulty level is notched up by adding street lights that go red the moment you finally have some space to move. Also, there is the big and free ‘bus lane’ laughing in your face, daring you to drive on it.  Once in a while a big bus whirrs past you with two very happy passengers staring out in disbelief at the jam of cars in the adjoining lane.

After all this adventure, one finally reaches the office and gets straight to work, as the few extra minutes that could have been dedicated to the riveting discussions with one's colleagues by the coffee machine have been spent loitering on the roads. In the evening there is barely any time to pull your head out of the files, before its time to hit the jam game at the next level…

----
Toshda Roy is an engineer by qualification, a marketing person by profession and a writer by passion.