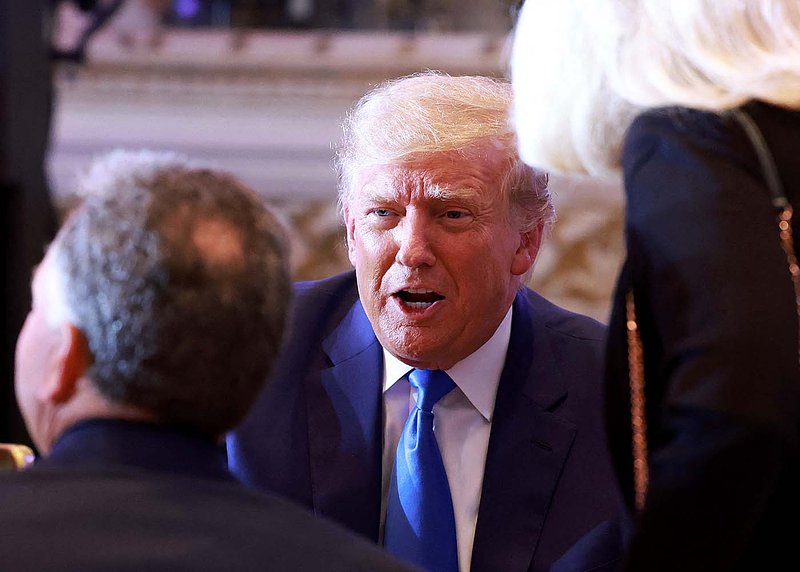 Former U.S. President Donald Trump mingles with supporters during an election night event at Mar-a-Lago on November 08, 2022 in Palm Beach, Florida. Trump addressed his supporters as the nation awaits the results of the midterm elections. / © Joe Raedle / AFP

Control of the House and Senate still remains uncertain. However, the so-called Red Wave is not materialising.

The outcome of the midterm elections will influence the rest of President Biden's term. Will these results bring Donald Trump closer to his comeback?

The results will determine which party will control not only the House and the Senate but also governorships and critical state positions around the country; such as secretaries of state and supreme court justices.

The outcome of these midterms is critical for a politically divided United States. Who gets control of what, will determine issues such as the future of legal abortion in several states and Biden’s ability to pass legislation and govern.

As the Red Wave fails to materialise, the US and the world will watch closely, to where and how election results are accepted by extreme Republican voters who vowed to deny anything but victories.

Democracy itself is also at stake: Voting rights were on the ballot in several states, with some putting forward proposals for restrictions meant to defend 'election security' and others suggesting the expansion of rights and protecting access to participation, amid fears of an overall weakening of the country's election systems and faith in institutions.

For example: In Ohio, voters have approved a measure that would prevent any future efforts of allowing non-US citizens to participate in local elections, in stark opposition to a proposal in New York City, to allow permanent residents and foreign workers to vote in local elections in the city.

Much of this 'situation' has arisen because of former President Donald J. Trump and his effort to overturn his loss in 2020 with baseless claims of a stolen election that mobilised his followers in and out of politics. More than 260 Republican nominees up and down the ballot had questioned the results of the 2020 election before the midterms, Axios found.

Trump was not a candidate in the Midterms, but you'd be forgiven if you thought he were as he's spent the past 2 years delivering speeches and propping up Republican candidates, people he's planning to count on, as he's more than likely going to be asking for their support and nominations ahead of a much-anticipated run in 2024. His political power was very much on the ballot, and as of this moment, more candidates he endorsed have lost than won; but many races are yet to be called.

Still, Trump is expected to make, what he called, a "very big announcement" next week at Mar-a-Lago. If he does, analysts say he will be the front runner for the party's nomination.

Even though the results of the midterm elections were not as favourable to Trump and the Republicans as they had hoped and predicted, last night Trump defended his record.

When asked to what extent his party's results should be attributed to him, Trump responded: "If they win, I should get all the credit, and if they lose, I should not be blamed at all."

Someone seen as a potential adversary to the former president is Florida Governor Ron DeSantis who won over Democrat Charlie Crist, supported by a strong Republican turnout in Miami.

For now, we await the results of the midterms, and we turn our attention to November 15 and Mar-a-Lago, for Trump's “very big announcement”.