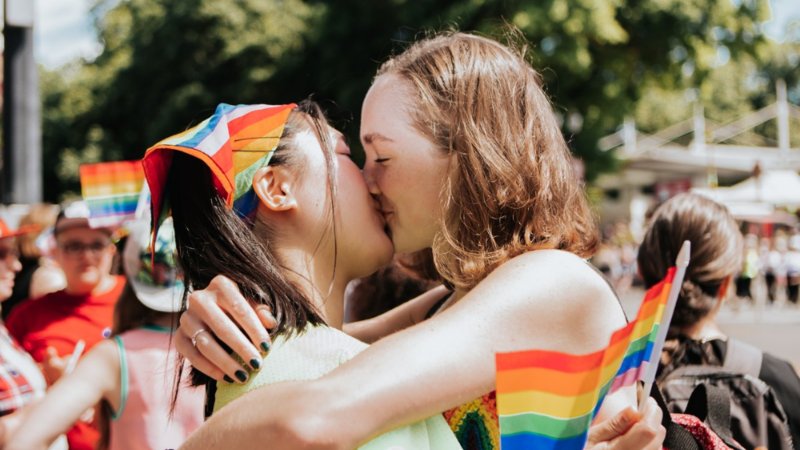 As you may know, a space for queer people does not exist in Luxembourg. And I don’t only mean clubs and bars, there is literally no space for us to hang out, meet each other, exchange experiences.

Partying and mingling aside, the worst effect that this has on young people is a complete lack of representation. They can’t really meet like-minded individuals because queer people don’t walk around with badges saying I’m Gay on their shirts (or at least not all of them) and even for the people with the strongest gay-dar it’s really awkward and out of place to start off a conversation with "Are you straight?" Just the thought of it gives me a flashback to my first lesbian attempts consisting of asking half of the female population at the club - "Are you into girls?"

This is something heterosexual people can’t even begin to imagine. It’s already nerve-racking enough to ask anyone out, let alone go through something like this. Especially for teenagers, it’s very important to identify with people from their own tribe, but it can prove to be practically quite challenging. You’re usually not even fully out to your friends, let alone your parents. You’re scared to be outed but at the same time you’re dying to meet people like you, you’re craving your first kiss, your first time. And not only do you need to fight all these inner fears, on top of that you need to find the courage to ask around if people at the party are gay. It’s insane and it’s hard for me to describe how scary and self-conscious of an experience it can be.

Let me put it this way. For a straight teenager, it’s completely normal to go into a club, get drunk and start making out with people of the opposite sex. Sometimes this happens without even saying hello. This task is not as simple for gay people and really neither females nor males have an easy job doing that at such a young age.

For girls, it’s completely glamorised and trivialised - it’s just making out. I literally remember a story of this girl who would take showers (making out sessions included) with her friend and then got told that they’re just besties. Instant heart attack, goodbye, take me to the ER or actually just don’t - let me die, it’s easier.

For guys, things can get more aggressive and threatening. While we tend to sexualise homosexual females, homosexual males are treated with more hatred and disgust, especially by heteronormative males. If you’re a gay teenager who somehow built up the courage to try to make out with a guy at the club or even just flirt with him, chances are you’ll be laughed at with disgust, verbally assaulted or actually attacked. Of course, this started changing in the recent years as young people seem to exude more awareness and open-mindedness in regards to the LGBTQ+ rights and activism, but sadly not enough has changed  to say gay males don’t get heavily harrassed anymore.

In Luxembourg, trans visibility is still very much ignored.

For non-binary and trans people this is even more disastrous. They get laughed at, scolded, physically and verbally harassed, assaulted. In fact, many of them don’t make it back alive home. In Luxembourg, trans visibility is still very much ignored and so especially with the ongoing rise of bullying among teenagers, a young trans person going out can turn into a highly traumatizing and dangerous experience.

For many, gender identity is still much more of a touchy subject than one’s sexuality. Parents tend to accept their child is queer with more ease than to accept that they don’t belong to one of the binary genders. That blows a lot of people’s minds and they find it hard to even begin to understand what their children live through. The paradigm shift necessary for them to conceptualise it proves to be too heart-breaking for them to go through and out of their own insecurity and ignorance they can exude very aggressive behaviour that leads to severe traumas for their children. And if that’s how gender alternative people get treated by their own relatives, you can imagine what happens in a club among creepy middle-aged horny men and vicious teenagers.

The under-representation of LGBTQ+ youth in Luxembourg leads to disastrous outcomes for people of different genders and ethnicities and deepens the default projection of heteronormativity as the mainstream culture. If we want queer teenagers to stop taking their own lives and get out of deep depression, we need to provide the space and the necessary knowledge not only to those who seek it but to the general audience. Without normalising and spreading the LGBTQ+ reality across the country, as queer people we will not feel like a part of Luxembourgish society but rather - mere outsiders.