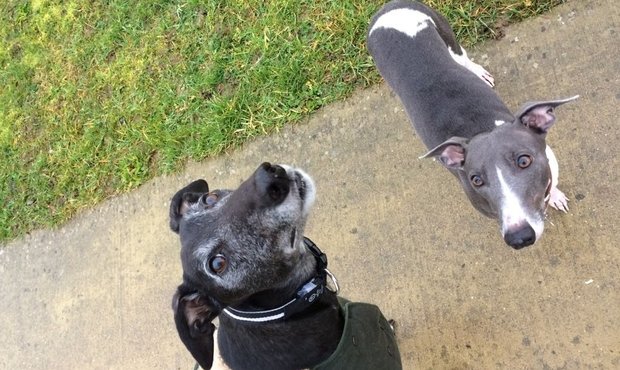 Moving to a new country brings with it a host of new experiences, some of which stand out more than others.

If I were to list the first three observations that I remember making upon moving to Luxembourg, it would likely look something like this:

I have already written a facetious piece on the love of Lycra, and penning something about the shutters doesn’t seem like the most inspiring of undertakings. The dog issue does deserve some attention, however.

Strolling through the parks, woods, hills, and beaches of Edinburgh with our greyhound Mylo (pictured above left), bumping into other dogs and their owners was always one of the best parts. Mylo would have a quick play, some pleasantries would be exchanged, and we’d all get on with our day. That's not to say that every dog in Edinburgh was perfectly behaved; there were certainly many who happily spent their days barking at everything they saw, but they were the exception rather than the rule.

Here it seems to be the other way around, as even a short walk around our block will set of a chorus of frantic barking that echoes through the entire village. Many dog owners also seem to either be exceptionally wary of other dog walkers, unable to control their own dogs, or both.

On one of my first walks with Mylo after moving to Luxembourg, we came across a woman who, like myself, was out walking her dog. Upon seeing us she immediately retreated back into her garden, pulling her dog along with her, and hid behind a bush until we had passed. At first I was somewhat concerned that I might look like a thug by Luxembourgish standards, but I soon came to understand that this was far from uncommon behaviour in Luxembourg. Since this first experience I have seen other dog walkers change direction or stop and wait to ensure that our paths don't cross on a regular basis, and in some cases even tie their dog's lead around a tree as they would otherwise be unable to stop them from charging at us.

Similarly, people who - like us - walk their dogs off lead in places that allow for this will automatically put their dog back on the lead when they see another dog approach. This is quite the opposite of what would generally happen in Edinburgh, and indeed goes against what most dog trainers would recommend.

There are several reasons for this, including that dogs tend to be more reactive on lead, they can end up feeling trapped, and they can't as readily engage in normal dog greeting behaviours. Put simply, letting dogs meet off lead is likely to be less traumatic for both the dogs and their owners. Dogs also take emotional cues from their owners, so if the owner doesn't feel comfortable meeting other dog walkers and tenses up (or retreats, hides, starts barking..), guess how the dog will feel and in turn react?

Before the comments start rolling in, I’m not saying that dogs should always be off lead, nor that this is what is best for every dog in every situation. I also fully understand that there are dogs who remain reactive even after endless consultations with trainers, but this is far too rare to be the case for majority of seemingly reactive dogs here.

I’m not sure if there is some stigma attached to consulting a dog trainer in Luxembourg, or if there is another reason why so many dog owners seemingly do not. All I know is that being able to trust your dog, and for you dog in turn to feel that they can trust you, is what fosters the bond that makes dog ownership so enjoyable.

It seems terribly tiring having to be constantly on the lookout for other dogs and thinking of ways to avoid meeting them. There is absolutely no shame in consulting a dog trainer - quite the opposite, and it will make both you and your dog happier if they are reactive.