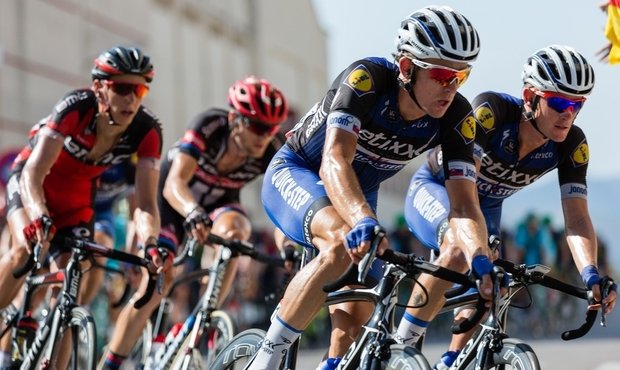 Something very strange has happened to me recently: I find myself considering the purchase of Lycra shorts.

I have always believed it a universally accepted truth that wearing Lycra is a (questionable) privilege reserved for a very small proportion of the world's population. It's essentially a human sausage casing that wraps around and accentuates bodily bits and bobs that none but full-blown extroverts would want accentuated. Perhaps extrovert isn't even strong enough a word, as really you would have to be on the Miley Cyrus-end of the exhibitionist spectrum to actually feel comfortable in Lycra.

Much like the equally unflattering Speedo, Lycra has also been a comedy staple for years as pretty much everyone looks rather funny wearing them. Or at least we say that it looks funny, but perhaps the real problem is that it makes us think that we look funny. Which most of us do, if we're honest. If you get right down to it, humans are fundamentally funny looking animals - all flimsy limbs, random tufts of hair, and knobbly knees.

Anyway - Lycra. On one of my first days in Luxembourg someone cycled past my partner and me and, shockingly, he was dressed head to toe in Lycra. The expression 'head to toe' ironically emphasises the only two parts of his body that most likely were not covered by Lycra, but 'shoulder to upper knee' doesn't have quite the same ring to it. In any case, I nudged my partner and said something along the lines of “there's a chap who takes his cycling seriously,” expecting a look of surprise and a chuckle when she saw what he was wearing. What I got instead was puzzlement, as to her Luxembourgish eye his attire was perfectly as expected.

I realise that giggling at the sight of Lycra isn't exactly the height of humour (Alan Partridge) or sophistication (owning grape scissors), but not yet being used to the Luxembourgish ways I simply didn't realise that Lycra was an actual option - much less some form of norm, a thought previously as unthinkable as wearing socks with sandals. Apparently that's also a thing now though (link box), which really leads one to question what the use of having fashion rules is if we can't stick to them.

So how on earth can it be that I have started to think that I look funny for not wearing Lycra as I cycle to work? Before moving to Luxembourg I lived in Edinburgh for ten years, where the outfit of choice when cycling to work is, frankly, a bus—so as to avoid cycling altogether. Failing that, people would wear whatever attire is suitable at their end destination. You would on occasion see someone donned in sportier clothes, which could only be understood as a clear indication that they were heading to the gym. But Lycra? Never; too ridiculous.

And yet I find myself feeling increasingly silly wearing normal gym shorts as I force my unwilling and highly demotivated legs to pedal me the 3,300 metres from the funicular to the office. The only explanation I have been able to come up with for this is that people have fancier, sportier bikes here, and therefore need fancier, sportier clothes. I guess it's a bit like driving an Aston Martin dressed in nothing but a bathrobe, which would make you look a bit of a knob—unless you happen to be Russell Brand, in which case it would still make you look like a knob but, again, you're Russell Brand.

Given that I am in fact not Russell Brand, can I actually get away with cycling to work in loose-fitting gym shorts? I'm not sure, but I'm starting to think that I can't. Not that my bike is particularly sporty, mind you, especially by Luxembourg standards, but it's sporty enough that some modicum of Lycra is starting to feel like an actual requirement.

To get to grips with what to wear when cycling in the Duchy, I've come up with a handy chart which I think fairly accurately tells you how much Lycra you need depending on the type of bike you own. This is very much a work in progress, so any input is more than welcome. 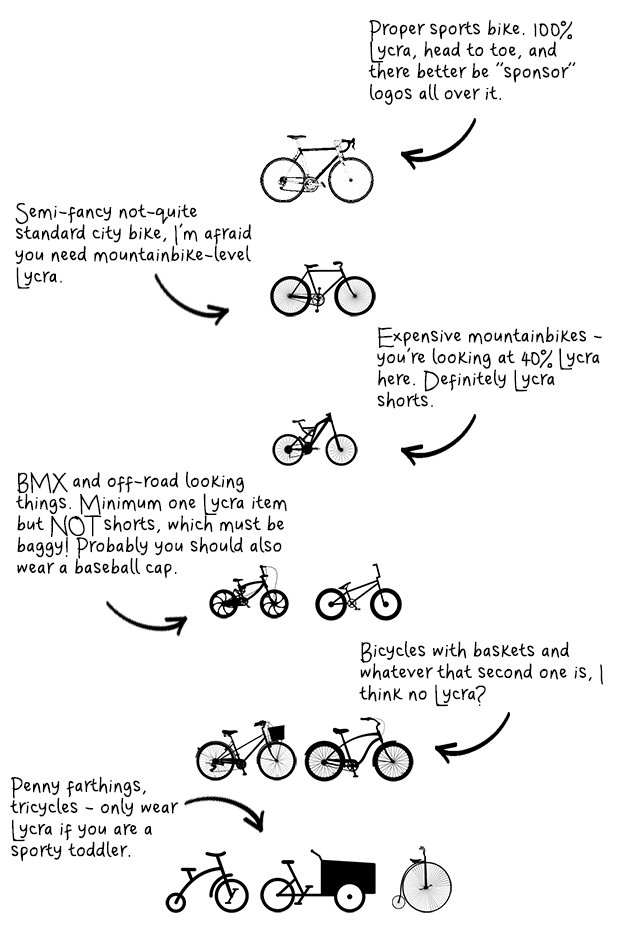