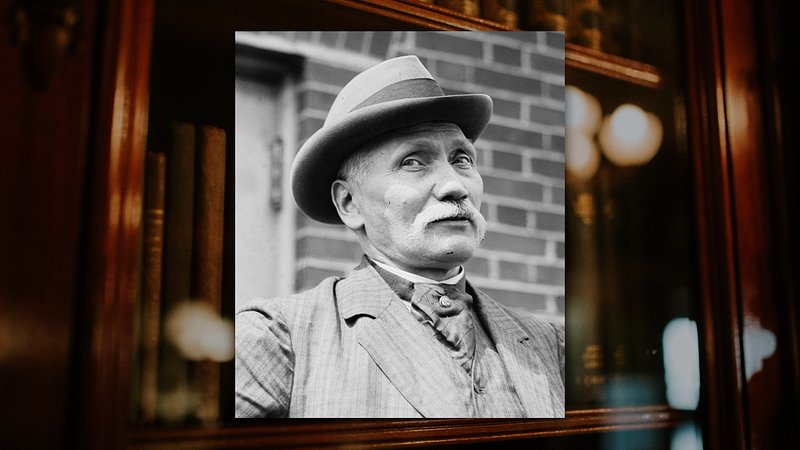 In 1906, the Prussian military became the laughingstock of Europe after an ex-convict disguised in a military uniform managed to convince several soldiers to help him occupy a town hall and "seize" the municipal treasury.

The next time you find yourself with a bit of time on your hands in Luxembourg City, you might want to visit the Notre-Dame Cemetery near Glacis (which we also recently covered on 'Once upon a time… in Luxembourg').

There, on Allée des Résistans et des Déportés, you will find a curious grave with a tombstone proclaiming in large bold letters "HAUPTMANN VON KOEPENICK". What you are in fact standing in front of is the final resting place of one of Germany's most famous folk heroes.

In this article, we will discover the infamous story of the "Captain of Köpenick", who ended up becoming a Luxembourgish citizen in the later part of his life.

I. A youth spent in prison

Wilhelm Voigt was born on 13 February 1849 in Tilsit. Voigt became a troublemaker early on in his life and was sentenced to 14 days in prison for larceny when he was just 14 years old. He went on to spend numerous years in prison between 1864 and 1891, four times for stealing and twice for forgery. In 1890, he attempted to plunder the court treasury in Wongrowitz, then in the Prussian province of Posen, with a crowbar and was sentenced to 15 years in prison for it.

After his release in early 1906, Voigt made his way to Wismar, where the prison chaplain had secured him a job. However, due to his criminal past, he was barred from entering the Grand Duchy of Mecklenburg-Schwerin after only a few months.

He then relocated to Rixdorf, outside Berlin, with his older sister Bertha and her husband, and found employment in a shoe factory. But once again, the known criminal Voigt was banned from living in the wider Berlin area on 24 August 1906. This time, however, Voigt refused to comply and decided to live in unregistered housing in Berlin-Friedrichshain near the local railway station. As he had little chance of securing a permanent job due to his status as an illegal resident, he eventually stopped showing up at his workplace.

It was at this point in his life that Wilhelm Voigt started to prepare the stunt that would change his life forever.

In preparation for a coup so outrageous that it would become legendary across Europe, Voigt started to assemble the uniform of a captain of the Prussian 1st Foot Guards Regiment from various sellers.

At around midday on 16 October 1906, Voigt put on his completed disguise and stopped a troop of Guards Fusiliers on the street near the then-military baths at Plötzensee in western Berlin. He summoned a second troop of relieved guards from the firing range of the 4th Guards Regiment and placed ten or eleven men under his "command," referring to a non-existent cabinet order "by the very highest command". None of the military officers questioned what was happening and blindly followed the orders of the disguised Wilhelm Voigt.

Telling the soldiers that he was unable to "acquire motor vehicles," he rode the tramway with them to Köpenick, east of Berlin. At a layover in Rummelsburg, he bought the men beer. Private Klapdohr, one of the soliders under Voigt's "command", later recalled that Voigt treated himself to a 25-pfennig cognac. Clearly not in a hurry, he then gave each soldier one mark and permitted them to have lunch at the station after arriving in Köpenick. Afterwards, he explained to the military officers that he planned to "arrest the mayor and possibly other gentlemen".

They then marched to the city hall of Köpenick, which was still an independent city at the time. Voigt occupied the premises with his men, sealed off all entrances, and prohibited officials and guests from "circulating in the corridors". Then, "in the name of His Majesty," he "arrested" the Chief Civic Secretary and Mayor Georg Langerhans, detaining them in their offices.

Voigt directed the gendarmerie officers present at city hall to close off the area and maintain "peace and order". He even assigned himself a gendarme "for better orientation". He also told the local police chief to take the rest of the day off. Seemingly quite happy about this unexpected development, the latter left his office in city hall and went home to take a bath.

Voigt then directed the treasurer to prepare an accounting statement and informed him that the municipal treasury would have to be confiscated. After the money had been counted, Voigt had bags brought to him, which he filled with the help of the treasurer, who held the bags and sealed them.

In the end, the false captain had the mayor and treasurer transported to a local police station in rented hackney carriages under military escort by a Guards Fursilier and a city police constable, after taking the prisoners' word that they would not attempt to flee.

According to press accounts, Voigt also managed to shut down the Köpenick post office for one hour, preventing phone calls to Berlin. Only after the detainees were released, some city councillors were able to notify the district administration office via telegraph.

After completing his stunt, the "Captain of Köpenick" gave his forces the command to keep the city hall occupied for another half hour. He returned to the railway station in the midst of a curious crowd. According to newspaper sources, he "had himself poured a glass of beer, which he finished in one go" in the station café before boarding the next train to Berlin.

Shortly after, he obtained civilian clothing from a men's outfitter and abandoned the majority of his uniform on the Tempelhof field, where it was discovered by passers-by.

Ten days later, he was arrested while having breakfast after a former cellmate, who was aware of Voigt's plans, alerted the authorities in anticipation of the hefty reward. Voigt was sentenced to four years in prison for "unauthorised wearing of a uniform, offence against public order, deprivation of liberty, fraud, and serious forgery of documents," but was pardoned by Kaiser Wilhelm II and released from Tegel prison early on 16 August 1908.

In the days after his release from prison, Voigt was greeted by riotous crowds upon his arrival in Rixdorf.

Clearly enjoying his newfound fame, he toured Germany, appearing in taverns and at fairs. During these events, Voigt reprised his role as "Captain of Köpenick" and sold autograph cards with photographs of him in both military and civilian clothing. Some of the soldiers who were fooled by Voigt's disguise even took part in the performances or had their pictures taken with him.

Because he was under police surveillance as a notifiable criminal, Voigt, who "was met with conspicuous sympathy mostly by the lower classes of the population," as a Saarland mayor reported, had to endure repeated harassment and even arrests by local authorities, who disliked his appearance's latent mockery of the state and the military. As a result, he was looking for a new home and chose to perform in other European countries. He allegedly made it to the United States in March 1910, where he is reported to have had considerable success with his tour – although historians have never been able to verify this claim.

On 1 May 1910, Wilhelm Voigt received a Luxembourgish passport and relocated to Luxembourg, where he worked primarily as a waiter and shoemaker as his public appearances dwindled. He earned considerable riches as a result of his fame and the "Captain of Köpenick" was actually one of the first car owners in the Grand Duchy.

He purchased a house at No. 5 Rue du Fort Neipperg (Luxembourg City) in 1912, where he lived until his death.

On 3 January 1922, at the age of 72, Wilhelm Voigt died in his flat in the Gare neighbourhood, severely afflicted by a lung disease and completely impoverished as a result of the war and inflation. He was buried at the Notre-Dame Cemetery in the Limpertsberg district.

IV. After his death

In 1961, the Sarrasani Circus purchased the concession of Wilhelm Voigt's grave for 15 years and contributed a gravestone. The gravestone depicted a scathing caricature of German soldier's head with a Pickelhaube, mouth wide open to deliver commands, and was framed by the inscription Der Hauptmann von Köpenick.

The municipality has maintained the grave since 1975, and the gravestone was also renovated at the request of several MPs. It now bears the inscription "HAUPTMANN VON KOEPENICK" as well as an illustration of a Pickelhaube. Below it, in smaller letters, is "Wilhelm Voigt 1850-1922," however the year of birth is off by one year. In 1999, the City of Luxembourg denied a request by the City of Berlin to rebury the bones in the German capital.

There is a rumour that Voigt's funeral procession allegedly ran into a squad of French soldiers stationed in Luxembourg. When the squad leader enquired about the deceased, the mourners said that it was "Le Capitaine de Coepenick". The squad leader then commanded his men to let the funeral procession pass with a military tribute to the departed officer, assuming that an actual captain (Capitaine in French) was being laid to rest.

If this rumour is true, there is no doubt that it will have brought great joy to the late Captain of Köpenick to know that even in death, he still managed to fool yet another group of soldiers.