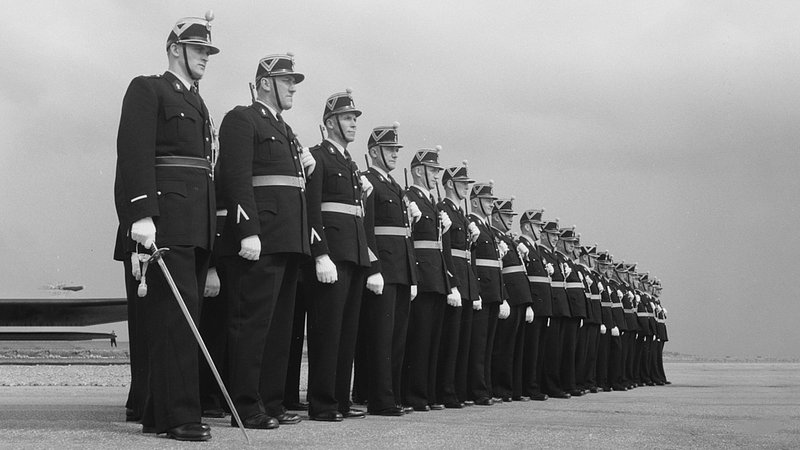 Before the new millennium, Luxembourg had a second law enforcement unit alongside the police: the gendarmerie. Where did this corps come from and why was it ultimately merged with the civil police?

If you were born in an Anglo-Saxon country, there is a good chance that the thought of the military enforcing the law among civilians will seem strange to you. But this type of law enforcement still exists in many countries around the world today – and once upon a time, it also existed in Luxembourg.

In this article, we will try and answer three questions: What even is a gendarmerie exactly? Where did Luxembourg's gendarmerie come from? And finally, why does it not exist anymore?

What is a gendarmerie?

A gendarmerie is a military unit that enforces the law among civilians. The word "gendarme" comes from the Medieval French phrase gens d'armes, which means "men-at-arms". The gendarmerie is a branch of the armed forces that is in charge of internal security in particular areas of the country (mainly in rural and small towns in the case of France). In countries that make use of this system, the gendarmerie usually co-exists alongside a civil police force as an additional law enforcement unit.

While the concept originated in France, Napoleon introduced it to several other Western European countries during his conquests across the continent.

Besides France, several other countries still have gendarmerie-like organisations to this day. Some of the most well-known include the Spanish Guardia Civil, the Italian Carabinieri, the Dutch Koninklijke Marechaussee, or the Portuguese Guarda Nacional Republicana.

Prior to 1 January 2000, Luxembourg also had a gendarmerie called the Gendarmerie grand-ducale. But as we will see in the following paragraphs, its history was anything but linear. In fact, it would probably be more accurate to say that throughout its history, Luxembourg experimented with the concept of a gendarmerie on several occasions.

The history of the Grand Ducal gendarmerie goes back to the 18th century, when Luxembourg was under Austrian occupation. On 23 October 1732, representatives of the Duchy of Luxembourg and the County of Chiny proposed the creation of a Maréchaussée (French for "Marshalcy") of 16 men, commanded by an officer, to "combat the scourge of vagrants and scoundrels". This Maréchaussée was established on 3 February 1733.

When France annexed Luxembourg in the aftermath of the French revolution, a corps similar to the French Gendarmerie Nationale was introduced in the area now known as the Département des Forêts. Luxembourg was a part of France between 1795 and 1813.

After Napoleon's defeat at Leipzig in 1813, Luxembourg was incorporated into the province of the Middle Rhine, administered by Prussia. At this time, the Gendarmerie Nationale was completely disorganised. It was ultimately replaced by a "Government Militia" composed of three officers and 106 non-commissioned officers and soldiers on 18 February 1814.

From 9 July 1815 until 1830, Luxembourg and Belgium were a part of the Kingdom of the Netherlands.

On 27 February 1814, the Corps de Maréchaussée was created in Belgium and extended to Luxembourg. While the name was different, this corps was in fact entirely modelled after the French Gendarmerie.

Between the start of the Belgian Revolution in 1830 and 1839, the territory of what we know as Luxembourg today was patrolled by the Dutch version of a Maréchaussée.

As a result of the 1839 Treaty of London, Luxembourg lost more than half of its territory. The predominantly francophone Province of Luxembourg became a part of Belgium, while the Grand Duchy of Luxembourg was granted independence, even though it was still ruled by the Dutch King in personal union.

After becoming an independent state, Luxembourg had to establish its own police force. On 29 January 1840, the Royal-Grand Ducal Gendarmerie was created.

1881 saw the creation of the Luxembourg Armed Forces called the Force Armée. The Gendarmerie was incorporated into these Armed Forces alongside a company of volunteers.

In 1903, a criminal brigade was created within the Gendarmerie to assist the judicial authorities in the investigation of crimes and offences. By this point, the force resembled the modern understanding of a gendarmerie: a military force with certain policing duties. The brigade was reorganised and reinforced in 1911.

Except for a name change in 1929 when the brigade received the name of Service de la Sûreté Publique ("Public Safety Service"), the situation remained more or less unchanged until World War II.

After the invasion of Luxembourg by Nazi Germany, the Gendarmerie was disbanded, and its members were integrated into the services of the German police and mainly deployed into the occupied countries in Eastern Europe.

The Gendarmerie was reinstated on 23 July 1952 and was part of both the army and the police force.

At the start of the new millennium, on 1 January 2000, the Grand Ducal Gendarmerie seized to exist for good when it was integrated into the newly formed Grand Ducal Police.

Why was the gendarmerie merged with the police?

In 1967, then Prime Minister Pierre Werner already considered merging the gendarmerie and the police and commissioned a study to assess the feasibility of the project.

In typical Luxembourg fashion, the path to this big reform was long and marked by tentative reforms rather than a big overhaul of the established system. In 1985, single command was introduced in certain circumstances before the Police and Gendarmerie School was founded in 1987. These first changes were followed by the introduction of joint service for the transmission and processing of information. Finally, in 1992, the judicial police service was opened to police officers and civilians.

At this point, there already was hardly any difference anymore between the police and the gendarmerie forces, an argument which was made by several MPs during a debate in the Chamber of Deputies in 1993. Three years later, in November 1996, Luxembourg's parliament laid the groundwork for a merger between the two corps during the current affairs debate on the reorganisation of the country's law enforcement units.

The idea for the merger was based on four main points. The MPs argued that a more visible police presence was required to respond to a feeling of insecurity among the population. To achieve this, recruitment would have to be improved both in terms of quality and quantity. The existence of the gendarmerie hindered recruitment because of the military framework and the more stringent selection process. Meanwhile, the merger was also expected to lead to a more efficient use of the available personnel and a streamlining of police work on both an organisational and hierarchical level.

It should also be pointed out that Luxembourg was not the only country to carry out law enforcement reforms at this time. Shortly after Luxembourg merged its gendarmerie and police forces in 2000, Belgium and Austria did the same in 2001 and 2005 respectively.