Search
PISA - The history and firefighters of Luxembourg Airport
How has Luxembourg airport developed from a humble grass strip to an important European hub for its passengers and NATO?

How did Luxembourg's airport develop from a little grass strip to a significant hub for European passengers and cargo? And what are the responsibilities of the airport's firefighters today? Find out in our brand-new PISA video.

PISA is a science magazine series that, until recently, has only existed in Luxembourgish. We have teamed up with its host Olivier Catani to reproduce some of the fantastic material in English. Our first episode about the history of Luxembourg's tram was released in December - you can rewatch it here.

Did you know that the airport was a strategic base for the US Army in World War II against Nazi Germany? Or that its runway, which is one of the longest in Europe, allowed the legendary Concorde to make an appearance in the Grand Duchy? These are only some of the astounding chapters of the airport's older days. Here is a short timeline of the airport's history.

Luxembourg’s first real airport was founded in 1936 in Esch on the site that today houses the technical control. There was a permanent runway, a club house, hangars and the Luxembourg Listener. This unique airplane flew music tapes and records in for RTL Radio from London. The end of the Second World War marked the beginning of Findel Airport, and that of “Luxembourg Airlines”, founded in 1948. The airline only had three aircraft at the start, flying to Zurich, Frankfurt and London. Cargo made up the lion’s share of these flights.
In 1961 the airline was renamed to Luxair. The first regular flight, with destination Paris, was conducted in March of 1962 with a Fokker F-27. The idea behind a national airline was also that of political motivation. It was around this time the decision was made for EU institutions to establish themselves in Luxembourg, Brussels and Strasbourg. The main argument against Luxembourg had always been: “how are we supposed to even get there?” Thus, the transport minister came up with the idea of a national airline. Even today the state is a stakeholder in Luxair. 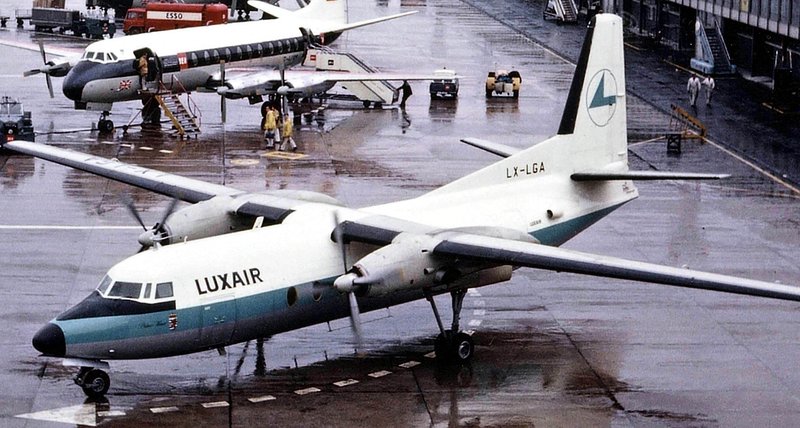 Later the airline developed its holiday offer. In 1965 the first flight with tourists onboard took off to Palma. Thanks to new and efficient aircraft Luxair was able to expand its Luxair Tours and holiday offers, and in 1975 Findel saw a modern terminal under construction, which was only replaced about 10 years ago.

In 1985 the supersonic Concorde stopped by in Luxembourg for a PR stunt. The plane could fly so fast that if you’d take off in Paris at noon, due to time difference, you’d arrive in New York in the morning that same day. For its take-off the Concorde required much of the airport’s runway.

NATO is in part responsible for its length: Findel is one of few European NATO airports. Training flights by the radar surveillance AWACS is a frequent reminder of that matter. In case of a crisis Luxembourg must make its airport available to the international allied community. Luxembourg further benefits from the Nato Kerosin Pipeline, which stretches underground around Europe to numerous major airports, including Findel. Fuel trucks only have to pump it out of the ground and drive up to the aircraft.

Cargolux, too, benefits from the long runway. The long take-off distance allows their aircraft to fully fuel and load up, improving cost efficiency. In terms of weight, LuxCargo is amongst the top 10 freight centres in Europe.

Want more PISA content? Check out our episode on the tram, and find the full Luxembourgish archive on Pisa.rtl.lu