With the tram line extension to the Central Station now complete, Sunday 13 December marks another milestone in the tram's revival story. But did you know that the current tram is not the country's first?

To show you more about this form of mobility in the Grand Duchy, RTL Today has teamed up with PISA, the popular knowledge magazine that until now has only existed in Luxembourgish. Presenter Olivier Catani takes you along for a ride into the past, showing not only historical footage from over 100 years ago, but also visiting the Luxtram maintenance site today.

1875 - The first tram cart was still pulled by horses, transporting a dozen or so passengers from what is now Glacis all the way past the Grand Ducal Palace and across the "Old Bridge" to the Central Station. The cart was already running on rail tracks by then.

This was shortly after the city had to give up its fortification, a decision which was made so as to enable the capital to grow. The tram was an essential part of this expansion from the very beginning. Those who arrived by train at the new central train station would have to be able to get to the city centre as quick as possible. As an alternative to the expensive taxi-carriages, this was the first form of public transport that almost everyone could afford.

1908 - Only a few decades after its beginnings, the tram was electrified, and the "New Bridge" was widened to allow for this technological improvement. With time, additional stops were added in Hollerich, Merl, Neudorf, Rollingergrund and Steinsel. As such, the tram connected the City with its outskirts.

The streets and the tramway then met in a star layout, which is where we get the name "Stäreplaz". The plan was that people from all over the country would arrive here by bus and then hop onto the tram. Back then the tram had to share a lane with other traffic, but today it has its own separate track.

The tram became a real advertising medium in its own right. "The adverts would be both on the outside and inside of the tram, which would then display them throughout the whole city. It felt like a movie. The tram would also pass by shop windows, which were also innovative," says City historian Robert L. Philippart.

1929 - The Great Depression hit Luxembourg in the late 20s, but the Tramschapp, located in Limpertsberg, offered work to at least 50 unemployed individuals. Nearly 300 people worked there in total, according to Romain Rech in an interview with Le Quotidien. He works for the Tram and Bus Museum that showcases the unique carriages of the Grand Duchy's past.

1938 - The tram network consisted of no less than 12 lines and 37 kilometres of tracks. The routes stretched all over the capital in every direction; from Heisdorf to Bonnevoie, from Neudorf to Merl. Today, the outskirts are connected by an extensive bus network. 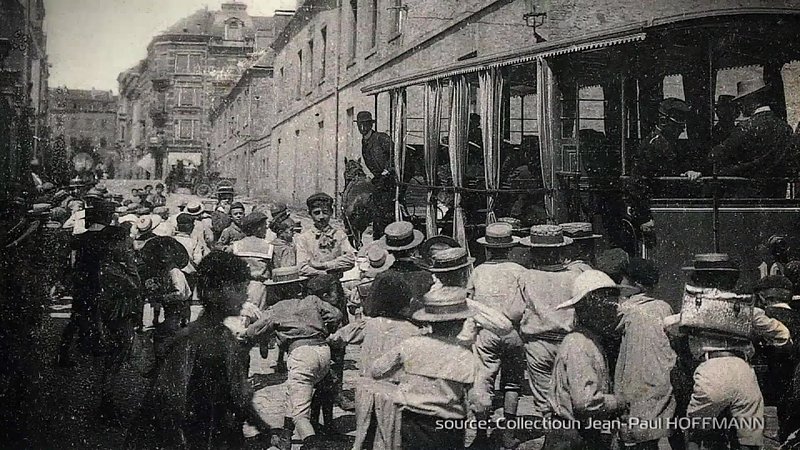 1964 - The shared traffic lane meant that accidents were common, especially as more and more people bought their own car. With new busses entering service and adding more flexibility to public transport, the tram was slowly phased out and in 1964, and the people of Luxembourg said goodbye to the last tram.

Unfortunately no serious investments were made to the tram after 1934, leaving it rather aged. Streets would fill with people every time a line closed, celebrating the future mobility of cars. It was to be a new chapter of transportation.

Luxembourg isn’t alone in re-introducing a tram service. Since 1985, 59 European cities have gotten their own tram in an attempt to sort out traffic issues. Trams allows the transportation of big groups of people in one go - and since it uses a lane of its own, it’s good at evading traffic jams.

1991 - The organisation TRAM asbl was officially formed, and the idea to bring back the tram to the City was put on the table. Due to harsh opposition of the plan, however, it was discarded just before the turn of the century.

2006 - After much planning and debating, sped up due to the worsening traffic situation in the country, the proposal of a new tram in Luxembourg City was accepted. The first phase of the network, from the Luxexpo - Gare, was put on paper in 2008. But this year the financial crisis hit, and thus the project was halted again.

2014 - The opposition demanded three referendums in total regarding the tram. But on 4 June, 2014 the Chamber voted in favour of this new mode of transport.

2016 - The first tracks for a new tram line were laid on Kirchberg.

2017 - A second generation of trams began operational service in December 2017, connecting Luxexpo with the Red Bridge before being extended to Luxembourg Airport and Cloche d'Or. The trams are charged during the journey as to make the trip between the Red Bridge and Central Station possible.

2020 - The tram now rides from Luxexpo all the way until the Central Station.

2022 - Planned extension to Bonnevoie, followed by Cloche d'Or and Findel Airport by 2023.