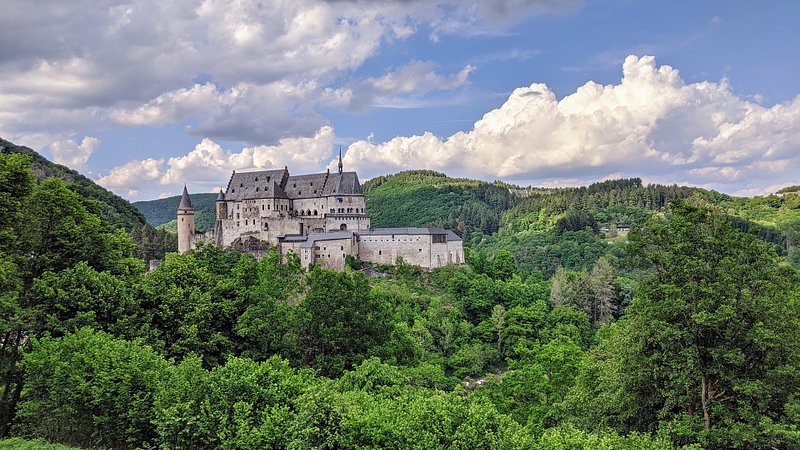 Luxembourg is scattered with beautiful castles, but the most famous one is undoubtedly Vianden Castle. Popular with locals and tourists alike, most children will remember it from their classic school trips.

As its name indicates, the castle is located in Vianden, in the north of the country. Sitting at a height of 310m, it is a hill castle overlooking the village and the adjacent river Our. Around 360-450 AD a small Roman castellum was built in that location and this would later serve as basis for the construction of the castle in the 11th century. What remained of the small castellum was then slowly transformed into what turned out to be one of Luxembourg’s biggest and most important fortifications.

The castle was constructed when the Count of Vianden, a powerful figure of the region, moved there from the Eifel region, which is now part of Germany. Through marriage the castle changed its owner in 1346, then belonging to the Count of Sponheim. However, this changed again and the castle came into the possession of the House of Nassau, the dynasty our current Grand Duke is also a part of.

During the French revolution the castle was seized but then returned to Wilhelm I, the Grand Duke of Luxembourg, who also happened to be the King of the Netherlands, in 1815. The Castle apparently no longer had any of its original importance, as it was put up for auction together with several other castles in 1820.

The then mayor of Vianden purchased it and proceeded to take the castle apart, selling every possible part: doors, windows, parts of the roof and the like. This was the beginning of a long era of decay of the once grand building. In the later part of the 19th century the castle was bought by the Grand-Ducal family, but it took decades until the state acquired the castle in 1977 and initiated restorative works. Today, the castle is almost completely restored and has returned to its medieval glory.

The castle unifies several building styles because it was enlarged and altered several times in the course of its history. Construction began in a Romanesque style which then evolved into the inclusion of more Gothic elements.  In the 17th century a mansion in the style of the Renaissance was added. 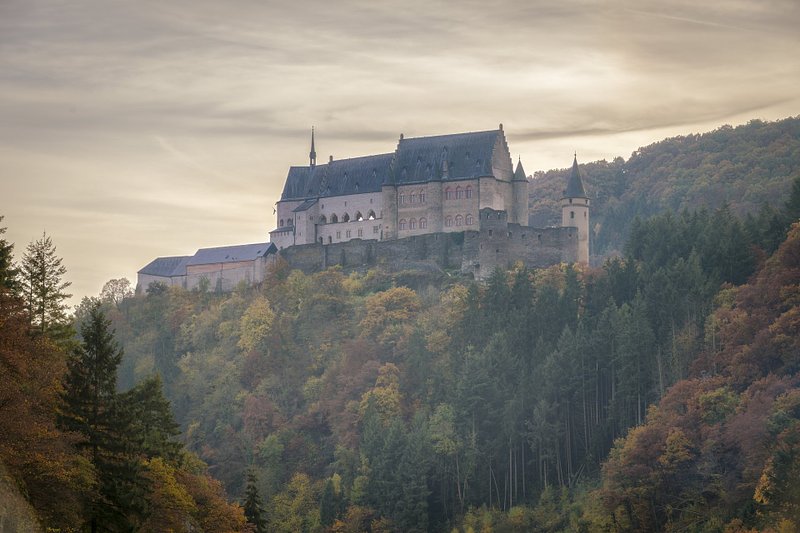 The different buildings stretch out over a length of 90m and are surrounded by a fortification wall. The castle counts a number of rooms, distributed over several buildings and two floors, amongst them are a chapel, several kitchens and a banquet hall big enough to accommodate 500 people. The size of the castle and the variety of rooms indicates that it was indeed owned by a family belonging to the aristocracy.

Over the years the castle attracted reactions from well-known figures, such as the French author Victor Hugo who even painted it during his stay in Luxembourg. Moreover, the film Shadow of the Vampire, starring John Malkovich and Willem Dafoe, was set there.

The castle is now open to the public and can be visited throughout the year. Apart from regular visits the castle also hosts special events such as concerts, but the really special event probably is the week-long medieval festival taking place once a year. Of course the 2020 edition was cancelled, but it is a great opportunity for a family outing, as the knight camps and tournament shows are especially popular among children.

If you are looking to host a special event yourself, several rooms of the castle can also be rented. More information on this here.

I highly recommend visiting the castle if you have never been - it is the perfect opportunity to take a day trip to the North and to combine the visit with a ride on Vianden’s chairlift, the only one of its kind in the country. Just be aware that the lift is closed during the winter months. Vianden itself is also worth a visit and in summer you can enjoy a drink in one of the numerous cafés along the Our, looking up to the majestic construction.