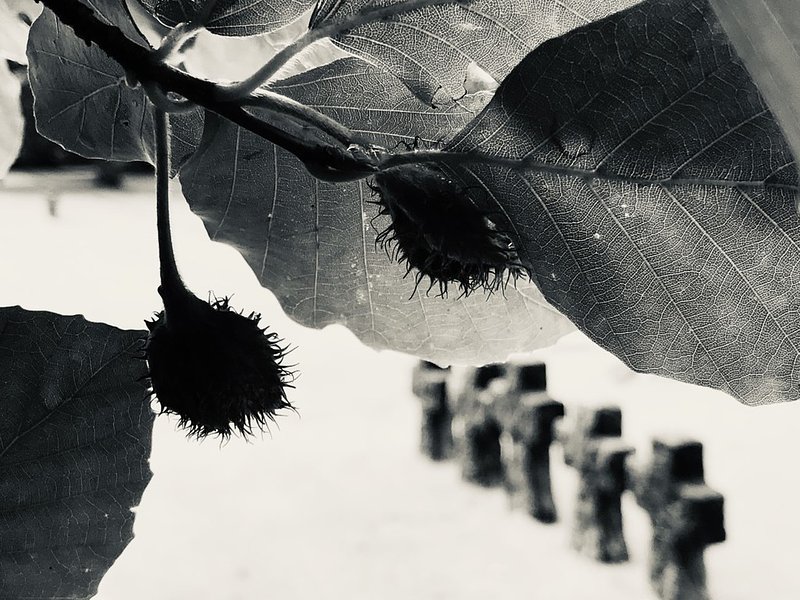 "History is a nightmare from which I am trying to awake," James Joyce's literary alter ego Stephen Dedalus resignedly sighs in Ulysses. It is August 1942, and the same statement holds true for 11,168 young Luxembourgers.

As you're mentally debating potential answers, does your mind swiftly wander to the German invasion of the country on 10 May 1940? Or does it perhaps conjure up imagines of the hardships that tightened their stranglehold on the Grand Duchy during and after World War I? Heisdorf resident and local historian Paul Schumacher has a different opinion. "30 August 1942 was without a doubt the most terrible day in the history of the Grand Duchy," the 87-year-old tells me with an air of graveness - and disquieting honesty. 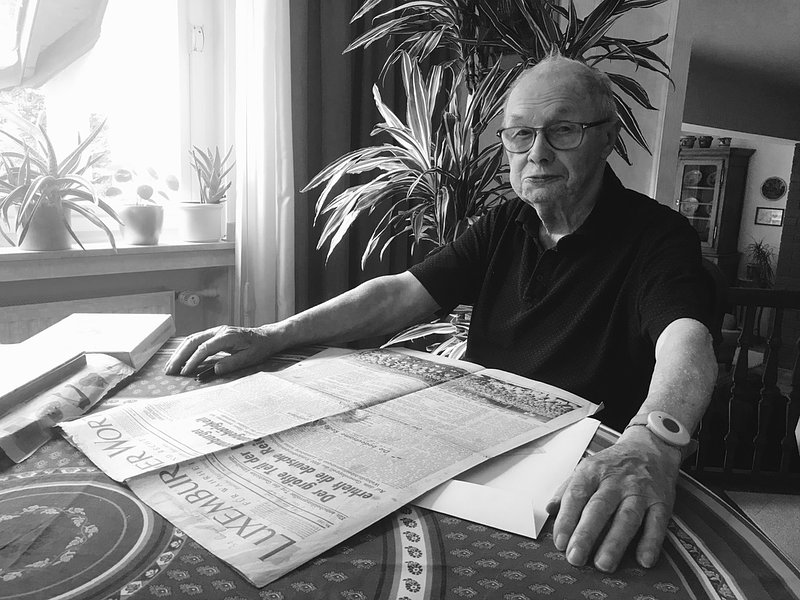 "A reign of terror" under Gauleiter Gustav Simon

Let's take a step back and start with the man without whom the tragedy might have been averted. As you may know, Luxembourg was occupied by Germany from 10 May 1940 until early 1945. The invasion itself was, at least for the most part, non-violent and only lasted one day. However, as Victor Delcourt writes in his book on Luxembourg under the Nazi occupation, "bloodthirsty horror only reigned after Gauleiter Gustav Simon came to the Grand Duchy" and subjected the country to "a reign of terror." Simon served as Nazi Gauleiter in the Mosselland and as the chief of civil administration in Luxembourg. 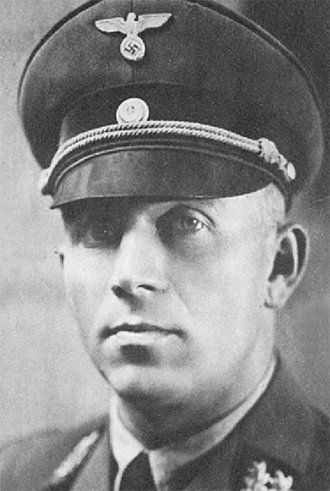 Gustav Simon, Nazi Gauleiter in the Moselland Gau (1940-1944) and chief of civil administration in Luxembourg.

Working under the direct authority of Hitler himself, Simon believed Luxembourg to be a Germanic state and did everything in his power to suppress what he perceived as an unnatural French cultural and linguistic influence.

It was only on 30 August 1942 that Simon decided to do what many Luxembourgish families had feared for a long time. The terrible news, according to Delcourt, "spread like a wildfire."
It was inside the exhibition halls in Limpertsberg (see gallery below) that Simon announced that he had officially made German nationals out of most Luxembourgers. This change of nationality allowed him, as Delcourt puts it, to follow through with the "terrible and unnatural thing of squeezing Luxembourg's youth into the detested Wehrmacht." 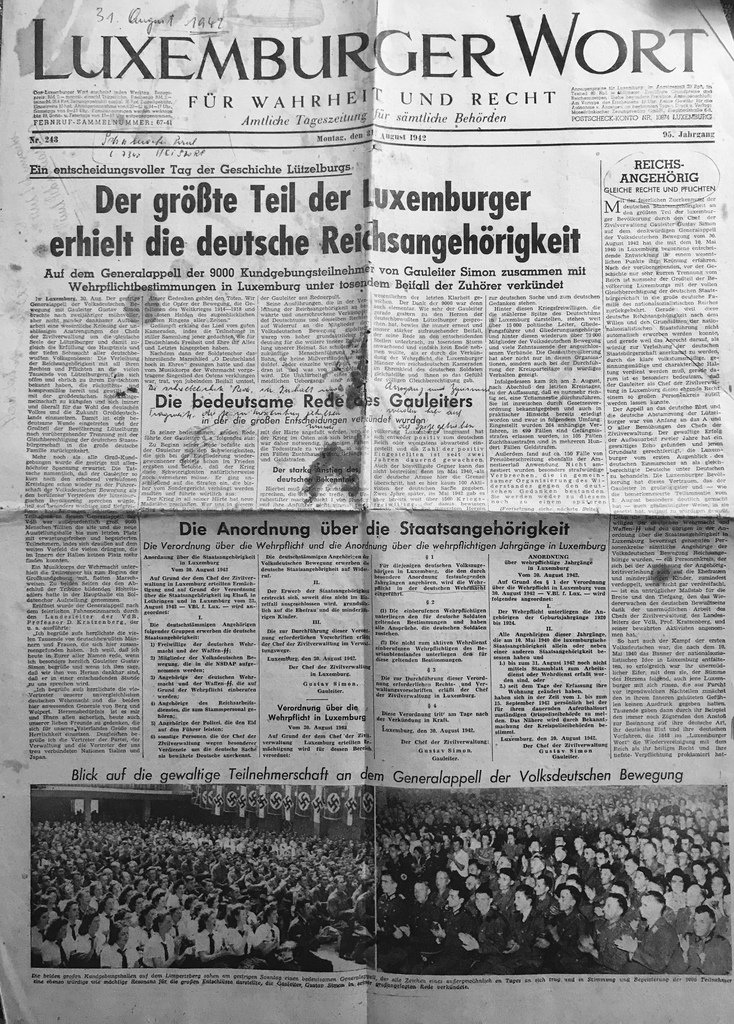 Luxemburger Wort, 31 August 1942. Bottom of the page: the exhibition hall where Simon gave the fateful announcement.

Depending on the source, between 10,211 and 11,168 young Luxembourgers (born between 1920 and 1924, later extended to 1927) were gradually conscripted into the German army. The young men had to fight far away from their homeland, from their families and loved ones. Worst of all, they had to take up arms against the Allied Forces who tried to liberate Luxembourg and shed their blood for a country and ideology that the vast majority of them did not believe in. Did you for example know that in 1941, the German occupiers under Simon carried out a civil status survey in which Luxembourgish civilians were asked to state their nationality, their mother tongue and their ethnicity. Contrary to the expectations of the occupier, 95% answered "Luxembourgish" to each question. Mir welle bleiwe bleiwe waat mir sinn.

Parts of his Limpertsberg speech that justified the conscription and additional comments of the Gauleiter were published in the Luxemburger Wort newspaper the next day (see image above and gallery below). To give you a taste, Simon for instance argued that "the independence of Luxembourg only lasted 50 years, it therefore means nothing in history." The independence, he went on, "was unnatural because it separated German blood from German blood. It was detrimental because it transformed Luxembourg into a laughing stock. It is therefore important for the future that every Luxembourger lives in the state that is the home of all Germans: the Reich of Adolf Hitler."

He added: "The time will come when each [young Luxembourgish] soldier will perceive it as his highest honour [...] to have served as soldier to the great commander Adolf Hitler."

To come back to the conscription, the forced military service was, as Schumacher puts it, "a death sentence for many of them." Nearly 3000 of them lost their lives during the war. Between 1943 and 1945 for example, 1,900 Luxembourgers were held captive in Soviet camps. 1000 of them were sent to the Tambov prisoner-of-war camp. 165 did not survive the conditions in the camp, another 38 died in the hospital of Kirsanow and 50 young Luxembourgers died on their way back home.

In the municipality of Steinsel alone, Schumacher tells me, a third of the young soldiers from Heisdorf and Steinsel did not come back home.

On 30 August 1942, Gustav Simon announced in Limpertsberg that male Luxembourgers born between 1920 and 1924 were conscripted into the German military. / © Gerry Erang
Fallen soldiers commemorated in Heisdorf. / © Gerry Erang
Fallen soldiers commemorated in Steinsel. / © Gerry Erang
History book ("Realienbuch") that Luxembourgish students were forced to use at secondary school during the German occupation. Among its contents: the NSDAP programme, recurring praise of Hitler and other Nazi propaganda.
From the same history book. The text above the picture reads: "It's not only a greeting but a joyful creed when we shout 'Heil Hitler!'"
Hollerich railway station. The conscripted Luxembourgers usually departed from here (along with Jews and dissidents who were sent to concentration camps). / © Cayambe, commons.wikimedia.org/w/index.php?curid=4805790
Galerie Hondsbësch near Niederkorn. The decommissioned mine provided refuge to many Luxembourgers who tried to escape conscription. / © Jwh,commons.wikimedia.org/w/index.php?curid=46445187
The photos published on this site are subject to copyright and may not be copied, modified, or sold without the prior permission of the owner of the site in question.

Simon's announcement triggered strikes across the country. The German authorities reacted with violence, declared martial law and executed 21 strikers - several of whom were teachers and professors. Opposition to the conscription also resulted in deportations to the east, executions, and imprisonment in concentration camps (many Luxembourgers were transported to Hinzert camp).

A personal example - the tragedy of Josy Lorang

Josy Lorang, the uncle of my own grandfather Norbert Lorang, was one of the many young Luxembourgers who were forced to join the German troops - and never returned to their homeland. 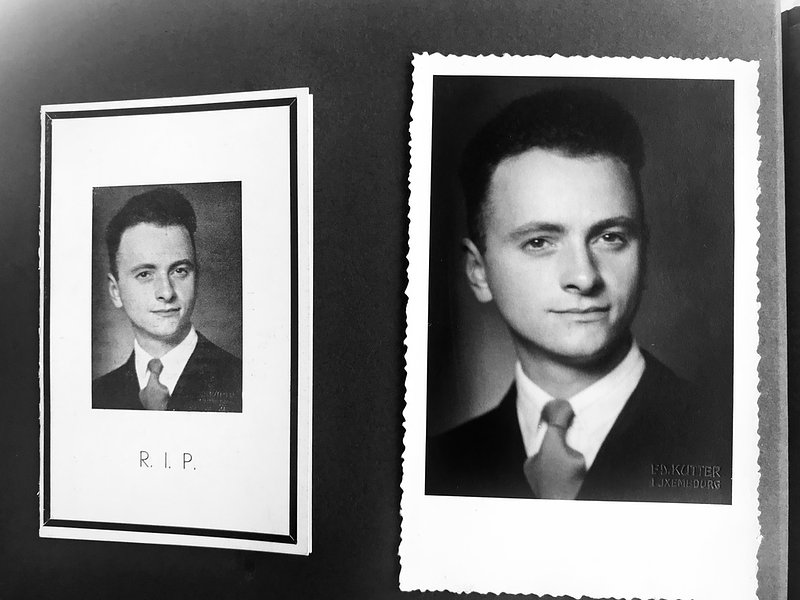 Josy was executed at 22. His family in Luxembourg was deported as a consequence. / © Norbert Lorang

Josy, who was freshly wed to Margot Ross, was deployed to Russia. He ultimately deserted and was captured by German soldiers shortly after his escape and sentenced to death by firing squad. After a month of painful waiting, he was killed in Krasnoje Selo, Russia, on 18 June 1943. He was 22.

Even decades later, it is with profound sadness that my grandfather shows me the last letter that Josy sent to his wife and mother who were still in Luxembourg. When he was writing the letter, Josy already knew that he would be dead by the time it reached his family. 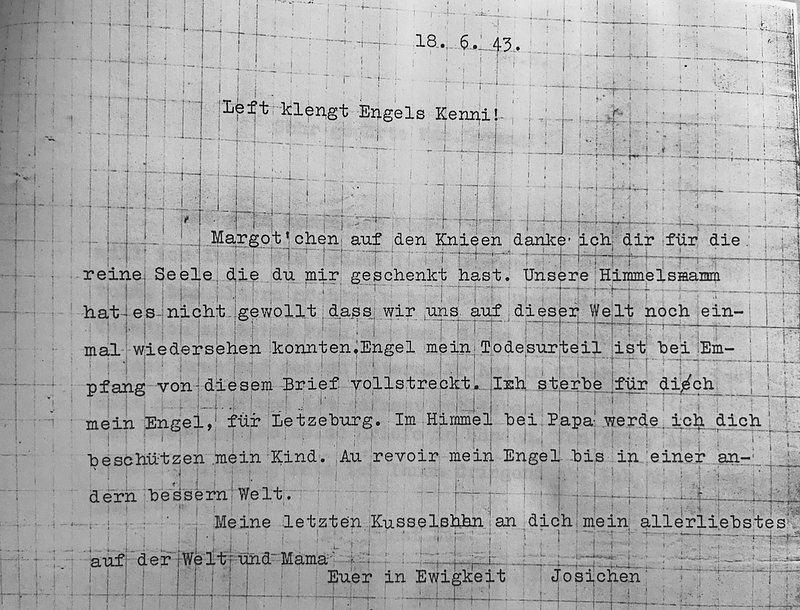 "Dear little angel's child!
Little Margot I'm on my knees thanking you for the pure soul that you have given me. Our heavenly mother did not want us to see each other again in this world. Angel, my death sentence has already been executed when you receive this letter. I die for you, my angel, for Luxembourg. From heaven with daddy I will protect you, my child. Au revoir my angel, until we meet again in a different, better world. My last small kisses for you my dearest in the world, and for mother.
Yours in eternity,
Josichen"

His family never learned what happened to his body after his execution. As a consequence of Josy's desertion, the German occupiers deported Norbert Lorang's family and took away their property.

With Luxembourg's Prime Minister Xavier Bettel heading to Poland on this 1 September to commemorate the outbreak of World War II and all the atrocities that followed, let's also pause a moment and remember the young people who, like Josy, suffered so irrevocably in Luxembourg and beyond.

Special thanks to Paul Schumacher and Norbert Lorang for sharing the historical and personal material that informed this article.

Gerry Erang is an editor and translator for RTL Today with a background in English Literature. He recently discovered his interest for Luxembourg's history.