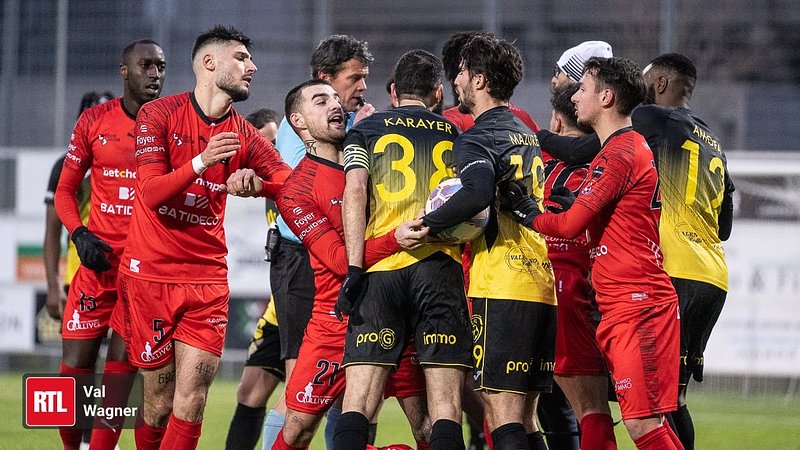 Only one gameweek remains until the winter break as Dudelange kept all points at home in a nervy encounter, while several clubs took great steps either towards or away from relegation. Everything important on these storylines and the rest below:

Given the relative lack of derbies across the country, every single one is widely anticipated and there is some extra pressure on the players to deliver due to the high interest. We can confidently say Differdange and Progrѐs Niedercorn didn’t disappoint in a game with five goals and several red cards with a minor mass fight on the pitch at one point!

Before the game, Progrѐs were slightly above Differdange on the table but that’s no surprise. Today’s hosts had an overall rough start to the season eventually resulting in a manager change, but it has been proving to be more of a quick fix than a foolproof solution. Niedercorn had, on the other hand, collected 10 of the last 15 points available, and arrived in Differdange in hopes of climbing up to third place with a win.

The match started off in a lively fashion, as Progrѐs decided to take things to their opponents with a few quick chances off the mark. The first goal arrived early as well, although not from the dominant side: Guillaume Trani crossed from a free kick towards the far post, where Gianni Monteiro Lima arrived, and beat everyone in the air to the ball, heading it past the goalkeeper.

To the guests’ biggest surprise, the second one followed shortly afterwards, in an even more direct manner: Differdange goalkeeper Christopher Mafoumbi launched Bertino Cabral with a Route One-ball over the top, and all the forward had to do was to get in a shooting position and have a go. Cabral did and succeeded, making it two goals from two chances for his team, totally against the flow of the game.

Between and after the two quick goals, Niedercorn went forward unrelentingly, and they did have the upper hand in-game over the first half against a highly defensive and very direct Differdange team that gambled on a few chances and – what they hoped would be - defensive solidity.

The goal to get Progrѐs back into the game came just before half-time, when prolific young French striker Elias Filet headed home from a corner. Filet is on loan from Niedercorn’s new French affiliate club, Ligue 2 side Sochaux, and is enjoying his breakthrough season at senior level.

Up until the half-time whistle Niedercorn dominated the game with a considerably higher number of passes and shots than their opponents. Differdange’s occasional breaks with a low number of attackers rarely hit the target, but when they did, Eldin Latik was often tested in goal.

The second half didn’t bring any major changes to the team’s approach, as defending the 2-1 lead was suitable, obvious even, for Differdange while their opponents were still pushing hard for at least one point to take away from the game having fallen two goals behind earlier.

After several smaller chances, the first real highlight since half-time came around the hour mark, when a smaller fight broke out between the players after a foul by Niedercorn midfielder Belmin Muratović. Following a good 3-4 minutes without the ball in action, the referee showed Differdange’s creative outlet Ulisses Oliveira a red card, which barely preceded another one, handed out to the manager Stéphane Leoni. The Niedercorn players involved got away with yellows, putting their team at a one-man advantage for the last half an hour in a search for an equaliser.

The hero of the day could may have been Filet, who managed to put the ball in the back of the net to pull level. An incredibly well-played attack with the perfect balance between organisation and flair, partly resembling Brazil’s third goal in their World Cup round-of-16 tie against Korea Republic earlier this week, was finished off by a deadly Filet shot after a backheel assist from centre-back Metin Karayer.

It wasn’t overly surprising to see Differdange sticking to their tools and trying to cling on the result even after the equaliser. Their task for the rest of the game was a moderate amount of time-wasting, a committed approach to defending and seeing the ball only for short periods of time. The scoreline didn’t change for the rest of the game – up until the 89th minute, when substitute Bilal Hend claimed the three points for Progrѐs with a brilliant curved shot at the far corner which did, indeed, deserve three points alone.

Although FCD fans can call their team unlucky conceding such a late winner, but the stats are once again more telling than the scoreline. This style of play suited the team against a better-organised and more cohesive attacking unit with a quality squad, although from the moment coach Léoni was sent away from the coaching zone to watch from afar, the team collapsed under the increasing pressure from Filet and co., and could say the 0 points were eventually the expectable outcome given their mentality.

Player of the Weekend #14

Although a team’s defensive structure rarely grabs headlines, this Rosport team has been extremely impressive in their last two games: they held Hesper to a 0-0 draw, before doing the same for 87 minutes against Dudelange, only falling to a late defeat from two goals in quick succession. Gilles Feltes was the main leader of this Rosport defence with and without the ball, while Erik Brandenburger is another worthy contender for the best player’s award this week, despite being on the losing team.

Although the play before above-described Filet hit is as nice and slick as it gets here in Luxembourg, it would be a waste of this column not to mention anyone else.

Rayan Philippe is back to scoring ways after last week’s 0-0 draw for Hesper. This time around he opened the scoring and doubled his team’s lead in the first half against Wiltz, with two stunning shots. His first goal was from a quick, sliding position as he reached on to a ball that would have been deemed too long for 9 out of 10 strikers. The second one was even easier on the eye as he ripped a thunderous shot in the net from close range, not even waiting for the ball to drop after an assist from a

Storyline of the Weekend #14

Although Rosport held on for the majority of the game against F91, they had to leave the stadium with all points dropped, conceding from a Herman Moussaki header and a Dejvid Sinani shot from a counter-attack late on. This win stretched Dudelange’s unbeaten streak against Rosport to an incredible 19 games. The last time they were beaten by their lowly opponents was in 2006 when Rosport were awarded a 3-0 win at the green table, having actually lost 3-0 on the pitch.