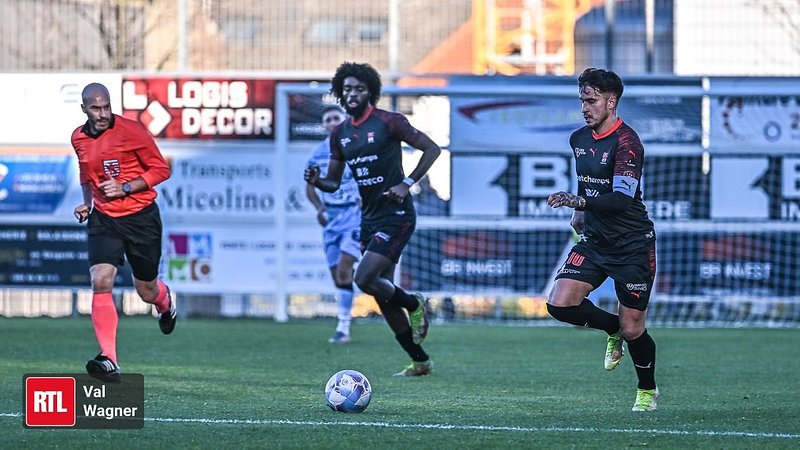 The World Cup 2022 is in full flow in Qatar, with most of the leagues around the world put on halt for the time being. The Luxembourgish National Division doesn’t belong in that category though, as the international break ended early here in order to kick on with league fixtures.

Below, you can find a recap of what you might have missed besides a glut of games on the world stage.

An interesting match-up between two rather underperforming teams in Progrѐs Niedercorn and Fola Esch made for a thoroughly entertaining game, and somewhat surprisingly, a close contest.

Fola Esch’s team travelled to Stade Jos Haupert under surrounded by increasing scrutiny. Last year’s second-placed team were now sitting in the automatic relegation 12 games into the season, and despite their well-documented financial woes and managerial changes, it is still considered unacceptable from a club of their stature to be battling relegation halfway through the season.

They were facing a Progrѐs Niedercorn side who, although have mostly won their easier games, failed to show up when it was most needed over the first 12 matchdays, resulting in a fifth place on the table before the game. Although the points gap from the podium is still quite narrow, it wouldn’t at all have been surprising to see Progrѐs occupying a European qualification spot by this point.

The teams went into the game with Progrѐs being massive favourites against Serge Wolf’s Fola. Although the game started with Fola chances – one stood out in particular, right in the first minute -, it was Niedercorn striker Elias Filet who opened the scoring from Florian Bohnert’s assist early on. The young striker is on loan at the club from Sochaux in neighbouring France, and has been showing great promise in his approximately 5 months at the club.

Fola surprised their opponents with a courageous positive display through the majority of the first half, as Progrѐs’ press did not seem to be able to pin back the visitors for longer periods of time. Eventually, the chances once again didn’t pay off, though. For all their efforts to equalise, they found themselves falling two goals behind shortly before half-time, as Filet very deservedly made it a brace for himself with a well-placed finish in the bottom left corner.

Going into half-time, a two-goal lead may not have felt justified but given Fola’s wastefulness in front of the goal, they could only blame themselves for a first-half result that felt decisive.

Thankfully for both the Escher team and neutral viewers, Fola could reorganise themselves a little in the break, which resulted in a surprise goal early on. Bruno Correia Mendes kept the ball successfully, making a run towards the goal line before cutting back towards Benjamin Runser – although the

French striker couldn’t get a touch, the defenders couldn’t clear either before it reached Lucas Correia, who scored confidently to finish off his clever run on the far side. Correia’s contract expired in June and was let go by his club for a few months, but after struggling to find the next step in his career due to a lack of options abroad, he decided to go back to Esch-sur-Alzette, where his former club were happy to re-sign the talented winger.

The Fola resurrection did not seem to last long, however, their goal succeeded by a number of chances from the hosts who came quite close to scoring for a few times. It wasn’t until after the 60th minute we saw a goal, but we couldn’t complain in the end: both teams found the net in the span of four minutes. First came the equaliser arguably against the flow of the game. Correia Mendes set up his team’s second goal for the day, this time with an intelligent through ball towards Ilyas Jeridi, who duly converted.

Fast forward to the very next chance and Progrѐs were ahead again. Attacking midfielder Belmin Muratović tried his luck from distance, and although Dany Martins made an impressive save, Mayron de Almeida reacted quicker to the second ball than anyone else, scoring the rebound from an awkward angle before the ball could have rolled out of play from Martins’ parry.

Despite Niedercorn having the advantage again, Fola looked far from lost. If anything, the conceded goal provided them with extra motivation, as they sensed a way back against a blunt Progrѐs side. The attacks came one after another, and although the majority of them lacked any real threat, the game didn’t seem to be in the home team’s hands anymore.

As the minutes ticked on, Fola had to take more and more risks in attack, but the end product didn’t come until the referee blew the whistle after 5 minutes of extra time. Niedercorn managed to get away with their second half shortcomings to register another important three points at home, keeping them in an adequate position in the race for European football.

On the other hand, the loss had more serious consequences at Fola Esch. The club has now fallen rock bottom on the BGL Ligue table, and it was enough for the board of directors to change head coach once again. Fola Esch legend, with 10 seasons at the club to his name, Stefano Bensi had an illustrious career as a player – until yesterday. The 34-year old attacker retired with 138 club goals in 314 games to his name, to take over the senior team. He had been training the reserve team since his injury in the autumn, in an effort to prepare for his coaching days that came a lot sooner than he expected it. The previous caretaker Serge Wolf will remain on Bensi’s staff, providing goalkeeping coach duty in the future. Bensi’s assistant manager will be fellow former Fola player Veldin Muharemović, 37, who retired yesterday alongside his new boss.

Player of the Weekend #13

Dejvid Sinani’s efforts against Käerjéng culminated in a hat-trick and an assist for the attacking midfielder, essentially helping F91 Dudelange to a win away from home and thus overtaking Hesper, who dropped points in Rosport. The first of Sinani’s goals came after an indirect free kick situation, where he was found in the box by Filip Bojić. He doubled his tally after receiving a rabona assist from Mehdi Kirch and guiding it in the bottom corner with ease. He was the one to take the corner striker João Magno scored from, before putting the cherry on top himself from penalty.

Sinani scored his hat-trick right after the international window where he finally earned his first Luxembourg cap, aged 29. He had been avoided by manager Luc Holtz but having been given a chance, he returned to his club in an even more dangerous form than when he left Dudelange for the national team camp.

Luca Napoleone scored from a direct free kick from about 25 yards out as Wiltz 71 played out a sensational 4-4 draw at home against Mondorf. There were other unique hits in that game as well, including the following Wiltz goal after Napoleone’s opener; this time goalkeeper João Machado timed his run out of his goal wrong, watching as the ball flies past him and bounces behind him, for David Timmermans to pounce on it and pass it into an open net.

Storyline of the Weekend #13

If Bensi’s retirement and Sinani’s great return to club football after his national team debut, we have another great story!

Pedro Resende managed Differdange throughout the 2021/22 season, eventually guiding his team to the UECL qualifiers, losing narrowly in the first round against Olimpija Ljubljana. A disappointing start to the season then led to Resende’s sacking in October. The Portuguese head coach was a free agent for more than a month, but after Henri Bossi left his Jeunesse Esch post, the club was looking for a new candidate. Resende embraced upon the challenge, making it his eighth club in nine years of his managerial career. He eventually took over Jeunesse last week, preparing his team during the international break for the remainder of the season. He was back by the touchline last Sunday. His opponent? None other than his previous club Differdange, whom he had only left a month ago. This time around he managed to beat them, with a composed performance from Jeunesse ensuring a clean sheet at the back and Alexis Larriѐre’s goal sealing the win