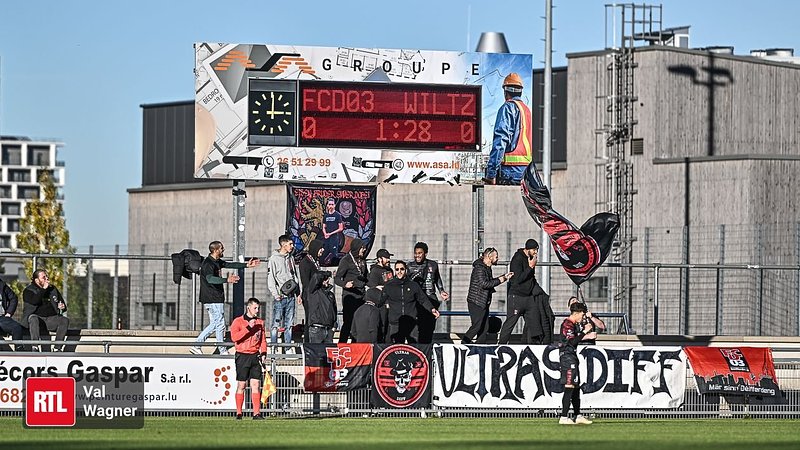 There were certainly some unexpected eye-catching results to witness this past weekend as the teams played their last fixture before the national team faces Hungary and Bulgaria in the upcoming international break.

Although we can’t go through all the 36 goals of Matchday 12, we are going to have a look at the main talking points below!

Had the Escher Derby been particularly flat and dull without any twists to write about here, there would have been several other contenders. But when we get to witness the biggest rivalry in the country twice a year, we expect the teams to show up and entertain. Regardless of form, squad quality or history, both teams are likely to deliver at a derby. And this is what happened once again.

Both teams were desperately looking for a win to escape the bottom third of the table on Sunday, although Jeunesse’s position on the table didn’t look particularly worrying heading into the game, coming off a 6-0 win the previous week. Fola’s position looked – and still looks – more precarious.

The game started well and both teams tried to make the first move, facilitating attacks, and taking control of the game. The first goal arrived quite early, too: Fola striker Benjamin Runser got away from his marker to cut the ball back from the left side towards Ilyess Jeridi, who put the ball back into the net – followed by wild celebrations from both the players and the majority of the 987 fans to make it to Stade Émile Mayrisch, as the day was looking promising for the home team.

Although the goal provided an extra drive and a source of motivation for Fola players to keep going on in an attempt to double their lead, an equaliser came next instead. The goal itself was yet another ignominious representation of the kind of communicational issues Fola’s defence is constantly struggling with, a glaring sign of a disorganised and dysfunctional team. This time, it was midfielder Mohamed Camara who tried to head the ball to goalkeeper Evan da Costa, but the latter was way out of his goal and thus couldn’t reach the backwards pass. An unforced error (to say the least) made it 1-1, with further problems still to come for the hosts.

Even before the end of the first-half, Jeunesse turned the game on its head and took the lead from a corner. Alexis Larriѐre’s set piece was aimed at the near post, and required a magical acrobatic move from long-serving captain Miloš Todorović to convert it. Fola’s defensive vulnerabilities seemed to be costing them a point at this stage of the game already.

As the second half kicked off, we saw four yellow cards in the opening nine minutes, showing just how intense the atmosphere is at games like this. The wait until the first – and solitary – red card of the day lasted until the 57th minute, when national team midfielder Diogo Pimentel’s absolutely

unnecessary challenge earned him a second yellow card, keeping him out of the final 30 minutes, as well as Fola’s next outing later this month, against Progrѐs Niedercorn.

Fola being a man down in such crucial position was a tough tactical dilemma for caretaker manager Serge Wolf, as his side was still hoping in an equaliser in the latter stages of the game. That was never going to come though, as Jeunesse soon made it three for themselves for the evening. One of the most consistent threats to the away side’s game, talented left-winger Gary Bernard laid the ball off to Todorović, who scored from a first-time shot outside the box! This goal made Fola Todorović’s favourite opponents in his career, as he hasn’t scored as many goals against any particular opponent as the three times he put the ball in the arch rivals’ net.

Fola were able to produce a number of chances towards the end of the game but a comeback never really looked feasible. At one point, Jeridi gifted Jeunesse a penalty with a foul but Alexis Larriѐre missed his attempt.

Eventually, Jeunesse ended up winning the crucial game to overtake no less than four teams on the table and climb up to 7th place. On the other hand, Fola only worsened their goal difference (and the atmosphere within/around the club) and they now find themselves in the relegation zone, only sitting above Etzella Ettelbrück.

Player of the Weekend #12

22-year old Dutch-English centre-forward Sam Crowther arrived at Victoria Rosport in August after his Go Ahead Eagles contract had expired earlier that summer. He joined a team that was tipped for relegation having lost key players after the previous season, notably reliable scorer Jordy Soladio, who opted for a professional career in the Baltics. He was one of the players Crowther was brought in to replace, but Rosport had a rather tricky start to this season’s BGL Ligue.

As expected, they could find themselves bottom of the table after 11 games, with only one win to their name. That is partly why Sunday’s 6-1 win at Mondorf was so surprising, as the hosts had been climbing up the table fairly steadily. Crowther scored his team’s first, second and fourth goals on the day, establishing himself as an incredibly composed finisher with great technique, steady feet and great confidence.

A stunner from Johannes Steinbach! Victoria Rosport’s defender took a chance from his own half(!) when his team was already 4-1 up against Mondorf, and how lucky we are that he did! Mondorf goalkeeper João Machado positioned himself on the edge of his box and was penalised for it by a deadly attempt from Steinbach! The ball bounced once on its way to the goal, almost kissing the crossbar on his way in. Phenomenal stuff.

Storyline of the Weekend #12

Both Dudelange and Hesperange were given hard tasks by the two newly-promoted sides, Mondercange and Käerjéng, and both games could well have ended with a surprise result.

Dudelange’s game was especially interesting: the scoreline stood at 1-1 until as late as the 81st minute, when skilful striker João Magno put his team ahead with a powerful header. The drama was far from over at this point, though: Mondercange’s veteran goal machine, El Hassan M’Barki was able to salvage a point for the home team – or so it seemed. Right until the very end of the game, when the three points were eventually sealed by F91 with one of the last touches of the game, as substitute Edis Agović exploited a costly mistake in Mondercange’s defending of a corner.

Hesper fans didn’t have to worry as much as their side prevailed 4-2 against Käerjéng at Stade Alphonse Théis – although the half-time score was 1-2 for the visitors. What followed not so deep into the second half was another ruthless Rayan Philippe finish (to raise his tally to 16 for the season, after only 12 matchdays), an unfortunate own goal by striker Franck Etoundi (former Marseille, Sevilla and

It was a rare occasion when both of the title contenders had a hard time defending against supposedly inferior opponents, but it was refreshing and encouraging to see for everyone who enjoys any level of competitiveness in this sport. Eventually, neither of the underdogs prevailed, but we can really feel for them (especially for Mondercange, who must have been sure they had a grasp on F91).